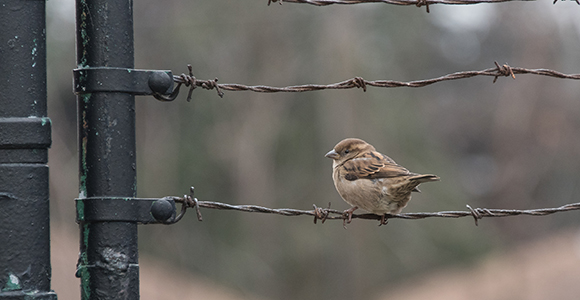 “Are not five sparrows sold for two cents? And yet not one of them will fall to earth without your Father’s care. But even the hairs of your head all are numbered. Do not be afraid, you are worth more than many sparrows.” (Q 12:6-7)

Matthew 10:29-31: “Are not two sparrows sold for a penny? Yet not one of them will fall to the ground outside your Father’s care. And even the very hairs of your head are all numbered. So don’t be afraid; you are worth more than many sparrows.”

Luke 12:6-7: “Are not five sparrows sold for two pennies? Yet not one of them is forgotten by God. Indeed, the very hairs of your head are all numbered. Don’t be afraid; you are worth more than many sparrows.”

We lose a lot when we remove this week’s saying from its context and either read it in a vacuum or read it in our modern context.

The original context of Matthew and Luke is last week’s saying: Jesus is warning against following militaristic resistance. He wants to win his audience to nonviolent forms of resistance. Today, and then, people considering using nonviolence as a means of creating societal change ask whether it will work and at what cost it might fail. To put it simply, “Will I die?”

Jesus doesn’t use pie-in-the-sky promises of success to gain a following toward his form of resistance. Sparrows die. But they are valuable and so are we. Jesus reminds his followers not to remain passive but to remember how valuable they are. He affirms their worth, hopes to foster self-affirmation, and encourages them to value courage to stand up for themselves or for others who are being abused.

It is a fearful thing to resist and stand up to one’s oppressors. It can be even more terrifying to do so while commited to doing so nonviolently. Sparrows were of the lowest value in the market place, and yet Jesus’ God cared even about them. And if the sparrows were cared about, how much more were the people Jesus taught? Every hair of their head was accounted for.

History does tell us that the people chose a more violent form of resistance and Rome’s backlash was merciless. But we are not at that part of the story yet.

In this saying, Jesus is seeking to win his followers to nonviolent direct action.

When faced with a choice between passively enduring suffering and engaging the work of nonviolent resistance and direct action, Jesus encourages,

Standing up is worth it.

YOU are worth it.

Stand up, and don’t remain silent.

Jesus message in the context of the last two eSights is:

Some teach that Jesus’ nonviolence is characterized by passive self-denial or self-sacrifice. But this is not true when one considers the tactics of cheek defiance, naked shaming, and refusal to play by the oppressor’s rules (see https://renewedheartministries.com/Esights/02-19-2016).

Jesus’ nonviolence is a way for those on the underside of a society to stand up and affirm their selves, selves that are already being denied by their oppressors. It is self-affirming resistance to violence. It is standing up and refusing to let go of one’s hold on life, even if one is threatened with a cross for taking that stand.

As Joan Carlson Brown and Rebecca Parker write in Christianity, Patriarchy and Abuse: “It is not the acceptance of suffering that gives life; it is commitment to life that gives life. The question, moreover, is not Am I willing to suffer? but Do I desire fully to live? This distinction is subtle and, to some, specious, but in the end it makes a great difference in how people interpret and respond to suffering.” (p.18)

Jesus’ reference to the ravens here and elsewhere, his reference to lilies and grass, his illustrations of considering the indiscriminate sunshine and rainfall all bring to mind James Robinson’s claim for a the literacy rates of first century social prophets of which Jesus would have been a part of.

James Robinson in his book The Gospel of Jesus makes the claim:

“Practically no Galilean Aramaic of the first century has survived in writing, no doubt in large part because the native population was for all practical purposes illiterate.

“Jesus was immersed in Jewish culture, for he would have soaked up the oral traditions of his village. Since we are flooded with written material, not to speak of video images, it is difficult for us to imagine the extent to which oral material lived on in an illiterate premodern population.”

“All this learnedness is very different from what is found among Jesus and his immediate followers, who not only were not learned scholars, but were largely illiterate—they could not have read the scrolls if they had seen them!”

Robinson goes on to suggest that Luke’s literate Jesus (e.g. Luke 4) emerged when the church itself ceased to be full of the poor and illiterate, and became populated by a more literate population. The writing down of the gospels was not even possible for the illiterate early followers. Whether Jesus could read or not, it is quite evident that his followers could not and were deeply dependent on the oral tradition.

This explains why Jesus often referred to what we witness in nature as evidence of his teachings rather than using only literary passages from the Torah or other sacred writings as proof.

Today, everything taught in Christianity is compared to what’s in a book, the Bible. But this was not an option for Jesus when his followers (and possibly Jesus as well) could not read. Jesus called upon his followers to look around at nature and consider the evidence before their eyes. Here was a God who caused the sun to shine on the just and the unjust, the rain to fall on the good and the evil. His teachings are rooted in oral stories with most characters being the same class as most of his audience: poor working class. Jesus didn’t refer them to a book, he called them to consider the evidence they could observe.

This is similar to today’s scientific method of deriving conclusions from what one witnesses. Jesus took note of what he saw in nature, and discerned a picture of YHWH not exclusively based on a book of writings that he had heard in the synagogue, but also deeply informed by the evidence of the natural world.

In our last eSight I shared a lengthy portion of Walter Wink’s book Jesus and Nonviolence. This week I want to share just a few more gems for your contemplation.

“Why then does [Jesus] counsel these already humiliated people to turn the other cheek? Because this action robs the oppressor of the power to humiliate. The person who turns the other cheek is saying, in effect, ‘Try again. Your first blow failed to achieve its intended effect. I deny you the power to humiliate me. I am a human being just like you. Your status does not alter that fact. You cannot demean me.’”

“A proper translation of Jesus’ teaching would then be, ‘Don’t strike back at evil (or, one who has done you evil) in kind.’ ‘Do not retaliate against violence with violence.’ The Scholars Version is brilliant: ‘Don’t react violently against the one who is evil.’ Jesus was no less committed to opposing evil than the anti-Roman Roman resistance fighters. The only difference was over the means to be used: how one should fight evil. There are three general responses to evil: (1) passivity, (2) violent opposition, and 3) the third way of militant non-violence articulated by Jesus.”

“The issue is not, ‘What must I do in order to secure my salvation?’ but rather, ‘What does God require of me in response to the needs of others?’ It is not, ‘How can I be virtuous?’ But ‘How can I participate in the struggle of the oppressed for a more just world?’”

“Jesus abhors both passivity and violence as responses to evil. His is a third alternative not even touched by these options. Antistenai cannot be construed to mean submission.”

“Neutrality in a situation of oppression always supports the status quo. Reduction of conflict by means of a phony “peace” is not a Christian goal. Justice is the goal, and that may require an acceleration of conflict as a necessary stage in forcing those in power to bring about genuine change.”

“Violence is not an absolute evil to be avoided at all costs. It is not even the main problem, but only the presenting symptom of an unjust society. And peace is not the highest good; it is rather the outcome of a just social order.”

“Violence simply is not radical enough, since it generally changes only the rulers but not the rules. What use is a revolution that fails to address the fundamental problem: the existence of domination in all its forms, and the myth of redemptive violence that perpetuates it?”

Remember what we read last week, and stop to consider how valuable you are. You are worth standing up for. You are valuable.

“Are not five sparrows sold for two cents? And yet not one of them will fall to earth without your Father’s care. But even the hairs of your head all are numbered. Do not be afraid, you are worth more than many sparrows.” Q 12:6-7

I’m so glad you checked in with us this week. There is a lot to consider in this week’s saying for sure. Keep living in love, and keep up your vigilant work of survival, resistance, liberation, restoration, and transformation, engaging the work of making our world a safe, compassionate, just home for us all.