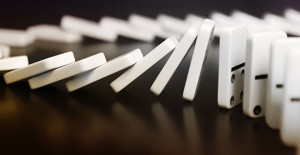 Luke 6:34: “And if you lend to those from whom you expect repayment, what credit is that to you? Even sinners lend to sinners, expecting to be repaid in full.”

Matthew 5:46-47: “If you love those who love you, what reward will you get? Are not even the tax collectors doing that? And if you greet only your own people, what are you doing more than others? Do not even pagans do that?”

Gospel of Thomas 95: “Jesus says, ‘If you have money, do not lend it out at interest. Rather, give it to the one from whom you will not get it back.’”

Our saying this week builds on the sayings we’ve discussed over the last three weeks: Loving Your Enemies, Renouncing One’s Rights, and The Golden Rule.

This week’s saying addresses those in Jesus’s audience who might have accepted his teaching on the Golden Rule, but only for those who would do the same for them.

These audience members would have reduced the Golden Rule to reciprocity: an exchange between equals for one’s own advancement and benefit. For them, the Golden Rule could have been co-opted to mean only “getting ahead” and not a way to make the world a safer, more compassionate world for us all.

James Robinson, in his book The Gospel of Jesus, describes what this limited interpretation could have looked like in the Roman patronage system and can look in our political systems today:

“In the Roman Empire, [self-interest] was called the patronage system and was even codified in the Latin expression Do ut des, “I give so that you give”; in the animal world, it is “I scratch your back so you scratch mine.” In modern politics, it is called euphemistically “special interests.” Lobbyists get elected officials to vote for the legislation that favors the firms whose “generous” campaign gifts made it possible for the officials to get elected in the first place. This is how elections are “bought”: our firm treated you well in your last election campaign, so you treat our firm well in the way you vote, and our firm will treat you equally well in your next election campaign. . . . Self-serving favoritism does not deserve the term “love,” for love shows itself to be real by being directed toward persons who have nothing they can do for us by way of return. So Jesus called for love to go far beyond one’s kinsfolk, neighbors, peer group, patron, and campaign contributors. As a result, his new love commandment is much less known, not to speak of being much less practiced.”

This quality of reciprocity is quite different from the ethic we are considering this week. The Sayings Gospel Q teaching is about loving those who cannot offer us anything in return. There is no quid pro quo here.

As we’ll see in the weeks to come, Jesus uses the Golden Rule to inspire a domino-effect in those who receive love to then turn and practice that love in their relations with others. The Golden Rule wasn’t designed to establish private relationships of mutual benefit between two individuals, but to produce a whole new world where everyone treats everyone as they’d like to be treated even when there’s nothing gained in return. Love was to be reciprocated, but more importantly, love was to be shared with other people.

This distinction is foundational to the rest of Jesus’s teachings in Sayings Gospel Q. The Golden Rule is not merely or exclusively between a loving person and a loved person. It’s between the loved person and another person in need of love, as well. The person who receives this kind of impartial love is called upon to reciprocate by indiscriminately loving a third person, and through their love, what Jesus calls “God’s reign” transforms the world and enlarges continuously from each person to the next.

In Sayings Gospel Q, the reign or kingdom of God begins with love even when we have nothing to gain.

I need to say a word about the comparisons in this week’s texts and the text references to Gentiles, tax collectors, sinners, and pagans. As we covered last week, when these texts were written, the school of Shammai dominated both the Pharisees and the Sanhedrin. In an effort to strengthen Jewish identity and culture, the School of the Shammai drew a sharp line between Jews and Gentiles, and prohibited the people from crossing that line.

But it’s in the soil of human disconnectedness that the weeds of supremacy and superiority take root. It doesn’t matter whether a group is in the dominant position within a society, as the Romans were, or forced into a subordinate position, as the Jews were. Supremacist beliefs for those at the top of domination systems justify and protect their position of privilege, power and control, whereas supremacist beliefs for those at the bottom are, as Howard Thurman taught, a useful fiction that oppressed people use to survive domination. (For a discussion on techniques of survival used historically by oppressed peoples that end up being self-destructive in the long term, please see Thurman’s excellent volume Jesus and the Disinherited.)

In this 1st Century context, Hillel taught that every person bore the image of the Divine, and worshipping God was revealed in how one treated another regardless of whether they were Jew or Gentile. But Shammai sharply distinguished between Jew and Gentile—we could call it “Jewish pride” or “Jewish Power”—and his school framed it as a matter of Jewish survival while the Jewish self was being denied by Roman oppression.  In our time, James H. Cone in his book Black Theology and Black Power, within the context of his own experience, rightly rejects defining Black Power as an effort to “assert their right to dominance over others because of a belief in black superiority . . . Black Power is an affirmation of the humanity of blacks in spite of white racism.” (Black Theology and Black Power, p.14-16, emphasis added.) The same could be said regarding LGBTQ Pride as a necessary expression of affirming the humanity of those whose humanity has been denied by the dominant sector of society.  Protesting Jewish subjugation in the context of the Jesus story could very easily be seen as a Jewish Lives Matter movement within early first century Palestine.

Jesus does not condemn the School of Shammai’s survival technique in our saying this week. His Jewish listeners did not need to have their self further denied: their oppressors were already doing that. They needed their self affirmed and liberated from oppression. While supremacy anywhere in society opposes egalitarianism, feelings of supremacy in the hearts of oppressors are of a markedly different quality than claims of superiority oppressed people might make.

Jesus does push back on his audience’s claim to be superior while using the oppressor’s ethics. When they loved only those who loved them, Jesus said, their morality was no greater than their oppressors’ morality. For Jesus, failing to love people who might never give anything in return negated any claim to moral superiority.  If the “Jewish Pride” and “Jewish Power” movements of his day would enter into the new human society they were seeking to establish, it would not be through more disconnectedness, but through endeavoring to embrace humanity’s interconnectedness and interdependence.  In other words, in response to a “Jewish Lives Matter” statement, Jesus as a fellow Jew is not disregarding their daily struggle to survive by responding, “No, All Lives Matter.”  To the contrary, he is saying, “Yes, Jewish lives DO matter! And if our liberation is going to made a reality, we must live by set of ethical teachings greater than those presently adhered to by our oppressors!”  The teaching we are looking at this week asks us to live from the truth of interconnectedness by taking care of those from whom we will never receive anything in return.

As Howard Thurman also states in his book The Luminous Darkness, “[A] strange necessity has been laid upon me to devote my life to the central concern that transcends the walls that divide and would achieve in literal fact what is experienced as literal truth: human life is one and all [people] are members of one another.”

Remember: according to Jesus, the reign of God was shown in people taking care of people.

We have spoken about Hillel’s prozbul enough over the last few weeks that I won’t detail it this week. Where Jesus mirrors the school of Hillel in their broader interpretation of Torah, Jesus pushes them even further on economics.

Jesus’s economics, in harmony with the Deuteronomic code (Deuteronomy 15:9), called the wealthy elite to lend even if the sabbatical year was approaching and to expect their loans not to be repaid.

To lend knowing that all debts would be cancelled in the Sabbatical year and your money would never repaid was a pathway toward wealth redistribution and a way to eliminate poverty among the Jewish people (see Deuteronomy 15:4). Today, some fear “socialism” or “communism” yet wealth redistribution from the wealthy to the poor was central to Jesus’s economic teachings in Sayings Gospel Q. He taught his followers to lend even if they would never get their capital back.

In Sayings Gospel Q, we are called to love indiscriminately and impartially. Jesus calls us to love in a way that mimics a God who “raises the sun on bad and good and rains on the just and unjust” (Sayings Gospel Q 6:27-28, 35c-d). Any partiality perpetuates the disconnectedness that pervades our planet.

The answer is to see that we are all interconnected and to love based on that, even if there is no immediate return on our relational investment. The goal is what Jesus called “the reign of God” where people, rather than dominating one another, learn to take care of and provide for one another.

So for all those in whom this week’s saying resonates as true:

This week I want you to spend some time contemplating the nature of impartial love.

Again, I’m so thankful that you are joining us for this series.

Until next week, keep living in love, till the only world that remains is a world where only love reigns.