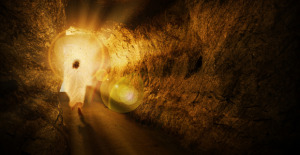 “‘These last worked only one hour, and you have made them equal to us who have borne the burden of the day and the scorching heat.’ But he replied to one of them, ‘Friend, I am doing you no wrong; did you not agree with me for the usual daily wage? Take what belongs to you and go; I choose to give to this last the same as I give to you. Am I not allowed to do what I choose with what belongs to me? Or are you envious because I am generous?’ So the last will be first, and the first will be last.” — Jesus (Matthew 20.12-16, emphasis added.)

This week I want to share with you a thought that I initially was very resistant to; once embraced, however, it truly and radically changes everything. This way of seeing God dramatically affects how we view ourselves as well as everyone around us.

What I want to share with you is the image of a God who takes sides.

We don’t like this way of picturing God. We want a God who is on everyone’s side. First, let me share with you what this doesn’t mean.

In Mark’s gospel, we have the story of Jesus’ interaction with a rich man. It says that Jesus “loved him” (Mark 10.21). To say that God takes sides is not to diminish in the least the fact that God infinitely loves those on both sides of oppression and marginalization. God loves both the oppressors and the oppressed. It is precisely God’s love for both sides of systemic injustice that is the basis of God’s desire to save both the oppressor and the oppressed from their enslavement to systemic oppression. And how does God do it? By standing in solidarity with the oppressed and calling the oppressor to do so too. In Mark 10, we are coming face to face with economic oppression. And Jesus, because he loves the rich man, takes the side of the poor and calls the rich man to a radical redistribution. Jesus is standing in solidarity with the poor and calls for the rich man to abandon his position of economic privilege (which would have most likely been land ownership) and to join Jesus, to follow Jesus, in stepping into solidarity with the poor as well. “Sell what you own, and give the money to the poor.”

We see in Jesus the revelation of a God who takes sides—this can also be seen in Luke 6.20-26 too!

The poor will be blessed by this new world I’ve come to inaugurate. The rich are going to struggle. The rich will find my radical redistribution difficult to embrace.

Make no doubt about it. Jesus loves everyone on both sides. Yet He is seeking to save both sides as well. Jesus is seeking to establish a new world for both sides where oppression, violence, and injustice are put right. And this can only be done by His standing with the oppressed and calling to the oppressors to rethink everything and to follow Him in taking their place among the oppressed.

To see this God who takes the side of the oppressed is vital if we are to follow Jesus into His radical new world.

Yet the Presence was not found in any of these. The Resurrection proves that God’s Presence was actually revealed to be with and within the One shamefully suspended between heaven and earth at the hands of the unjust oppressive Powers.

Whether it’s the Manifest Destiny of the 18th century, the White Christian Slave Owners of the 19th century, or the White-Male-Hierarchy, Binary-Gender-Hierarchy, or Hetero-Hierarchy of today, we live in a world where the oppressors always say that God is on their side. The typical response of many who are well meaning is to say that God doesn’t take sides. But, in the face of oppression, this doesn’t go far enough. It doesn’t go anywhere near as far as Jesus went. Jesus teaches repeatedly that God most definitely does take sides. God seeks to liberate ALL parties from systemic oppression, in every instance, through standing in solidarity with the oppressed. And if the God of Jesus takes sides, then those living with privilege must pick a side as well.

If Christianity does not offer a better god than the one who has always stood in solidarity with oppression, the best remaining option is atheism.

Jesus said it best: “The last shall be first and the first shall be last.” God’s justice, the justice that so many are socially, religiously, economically, politically, and ecologically hungering and thirsting for, is not retributive. It’s not punitive. No, no. God’s justice, as it is revealed through Jesus, is redistributive, transformative, and restorative. And Jesus has promised that in His radical new world, those who hunger for this justice will be filled. The Good News, the Gospel, is that with Jesus’ Resurrection, this new world has begun!

“Never forget, that Justice is what Love looks like in public.” — Cornell West

“Seek first the Kingdom and its justice.” — Jesus

“The spirit of the Lord GOD is upon me, because the LORD has anointed me; he has sent me to bring good news to the oppressed, to bind up the brokenhearted, to proclaim liberty to the captives, and release to the prisoners.” — Isaiah

“Today this scripture is fulfilled in your hearing.” — Jesus

From the heavens you uttered judgment; the earth feared and was still when God rose up to establish justice, to save all the oppressed of the earth. Selah (Emphasis added.)

1. Too often the Sermon on the Mount has been used by those in Power to keep others under oppression. This is done by sanctifying or “making holy” the position of being oppressed. The logic usually goes, “Why do you want to be rich? Jesus said, ‘blessed are the poor.’” But Jesus wasn’t saying that those who are oppressed by the present arrangement of this world are blessed under that arrangement. Jesus was speaking hope, saying that in this new world that He had come to inaugurate, those who are oppressed by the present arrangement are going to blessed by the changes His new world was about to make.

2. Make two lists, one entitled “Blessed” and the other entitled “Woe,” and write out in what areas of your life you are disadvantaged and in what areas you experience privilege.

Pray during this exercise that Jesus wakes you up to the areas of your life where you are still participating in oppression, injustice, and violence. Ask Jesus to give you the courage to stand in solidarity with the oppressed in each of these areas instead.

3. Share what Jesus shows you with your HeartGroup this week.

Till the only world that remains is a world where there is no more injustice, no more oppression, and no more violence, and only love reigns. Keep living in love. Keep seeking first Christ’s radical new world in the here and the now.

I love each of you, and remember: God does too!