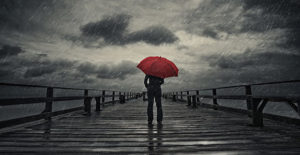 Luke 6:47-49: “As for everyone who comes to me and hears my words and puts them into practice, I will show you what they are like. They are like a man building a house, who dug down deep and laid the foundation on rock. When a flood came, the torrent struck that house but could not shake it, because it was well built. But the one who hears my words and does not put them into practice is like a man who built a house on the ground without a foundation. The moment the torrent struck that house, it collapsed and its destruction was complete.”

The gospels of Matthew and Luke each incorporate this saying into the climax of their accounts of Jesus’s wisdom teachings. Matthew lists it as the last teaching in the Sermon on the Mount, and Luke includes it at the end of the Sermon on the Plain. This saying is not part of the Gospel of Thomas, however. And there’s a good reason why not.

Stephen J. Patterson makes a pretty compelling case that the Gospel of Thomas belonged to the region of Edessa (see The Lost Way: How Two Forgotten Gospels Are Rewriting the Story of Christian Origins.) The imagery in this saying referenced the geography of Jerusalem and the literal foundation on which Herod’s Temple was built. That imagery would have had no relevance for people who valued the teachings of Jesus but lived in Edessa rather than Jerusalem.

The temple mount (rock or “foundation stone”) was highly regarded during the time of Jesus. In the Tanchuma (a Roman-Era Midrash), we read this poem:

So this saying borrows from the safety and security that the culture had invested in the temple even before their exile in Babylon. If we go back to Jeremiah, we find the community using the temple for a sense of security or safety:

In Jeremiah’s time, people were deeply violating social justice and yet believed themselves to be safe from God’s judgment simply because they possessed his temple. A “den of robbers” is not a place where robbery is committed but where robbers retreat afterwards to safely count their loot. This was how Jeremiah saw the temple: it had become a place that provided the powerful with safety and security while they continued to rob the poor.

The details were different by the time of Jesus, but the principles were very similar. Once again, the temple had become the center of a political, economic, and religious system that was exploiting the poor, and, once again, this temple was the foundation on which many built their trust and sense of security.

Josephus’s writings show just how much people valued Herod’s temple. A perpetual sacrifice kept the fire on the temple altar always burning. Even during the Roman-Jewish War of 66-69 C.E., and the siege and razing of Jerusalem in 70 C.E., priests kept the temple fire burning by maintaining a sacrifice on the altar, thus assuring Jerusalem, obstinate in the face of the city burning down around them, that they would emerge victorious in the face of the Roman siege. They kept the fire burning to honor their interpretation of Leviticus 6:13: “The fire must be kept burning on the altar continuously; it must not go out” (see also 2 Maccabees 1:19-22). The temple’s ever-burning flame in worship to YHWH symbolized continually maintained Divine favor, even during that last war.

“The darts that were thrown by the engines came with that force, that they went over all the buildings and the Temple itself, and fell upon the priests and those that were about the sacred offices; insomuch that many persons who came thither with great zeal from the ends of the earth to offer sacrifices at this celebrated place, which was esteemed holy by all mankind, fell down before their own sacrifices themselves, and sprinkled that altar which was venerable among all men, both Greeks and barbarians, with their own blood. The dead bodies of strangers were mingled together with those of their own country, and those of profane persons with those of the priests, and the blood of all sorts of dead carcasses stood in lakes in the holy courts themselves.” (The Lamentation of Josephus; War 5.1.4 19-20, emphasis added.)

This cultural history sheds light on why Jesus’s attempts to halt the daily sacrifices when he cleared the temple of merchants were so offensive, and it also explains why Emperor Titus didn’t just aim to subjugate Jerusalem when he ordered the city razed, but also sought to destroy the temple itself. The morale, the optimism, the assurance of Divinely affirmed victory among the Jewish people, in their revolt, had to be extinguished.

In the saying we’re considering this week, Jesus is standing in the critical tradition of the prophet Jeremiah. He is being very Jewish! As well as encouraging fidelity to YHWH, Jesus is calling his audience to prioritize practicing social justice [his ethical teachings] over mere possessing religious objects.

Today, some Christians need the same reminder. We may not have a temple, but we might have a pet doctrine that we think sets us apart from other members of the human family, a belief that makes God regard us as exceptional. Yet both Jeremiah and Jesus state that we should rather emphasize justice for the foreigners among us, those who are vulnerable in our socio-economic, political and religious order, and the innocent being exploited by privileged people. In the patriarchy of Jeremiah’s and Jesus’ culture, this focus would have meant serving the “fatherless” and the “widow.”  We must rightly discern who are the vulnerable in our order, today, and, like Jesus, stand with and work along side of them.

Jesus uses this saying to center his teachings rather than the trusted sacred temple. Perhaps Jesus also wanted us to regard his teachings as sacred as the temple and the rock beneath it that his audience revered.

Jesus grew up in the wake of political insurrections by various Jewish factions after Herod’s death, and I believe he knew all too well the result of armed revolt against Rome. Josephus describes how Rome squelched liberation movements in Judea, Samaria, and Galilee. The most immediate example when Jesus was a child would have been the destruction of Sepphoris, a town a few miles north of Nazareth, in 4 BCE. Josephus writes:

“In Sepphoris also, a city of Galilee, there was one Judas (the son of that arch-robber Hezekias, who formerly overran the country, and had been subdued by king Herod); this man got no small multitude together, and brake open the place where the royal armor was laid up, and armed those about him, and attacked those that were so earnest to gain the dominion. (Jewish War; 2.4.1)

Rome’s action was swift. A portion of the army went to Sepphoris where they “took the city Sepphoris, and burnt it, and made slaves of its inhabitants.” (Ibid., 2.5.1)  The rest of the army moved through Samaria and on to Jerusalem, burning and plundering any town or village that posed a threat. Once at Jerusalem, they attacked those who had “been the authors of this commotion . . . they caught great numbers of them, those that appeared to have been the least concerned in these tumults [Syrian governor Varus] put into custody, but such as were the most guilty he crucified; these were in number about two thousand.” (2.5.2)

Two thousand were crucified. Stop and ponder the magnitude of that number for a moment. Two thousand. Rome’s practice in responding to revolts and insurgencies is reflected in the speech Tacitus attributed to Calgacus decades later:

“…The yet more terrible Romans, from whose oppression escape is vainly sought by obedience and submission. Robbers of the world, having by their universal plunder exhausted the land, they rifle the deep. If the enemy be rich, they are rapacious; if he be poor, they lust for dominion; neither the east nor the west has been able to satisfy them. Alone among men they covet with equal eagerness poverty and riches. To robbery, slaughter, plunder, they give the lying name of empire; they make a desert and call it peace.” (Agricola 29-38)

“They make a desert and call it peace.” This description adds a haunting nuance to Jesus’s saying, “Take up your cross and follow me.”

Josephus tells that after Governor Varus put down the uprisings at Sepphoris and Jerusalem, “he returned to Antioch” (2.5.3).

So this was the political environment Jesus grew up in. Jesus wouldn’t have needed supernatural talent to listen to the spirit of Jewish, violent, anti-Roman sentiment and see where it all would lead.

I believe that Jesus was endeavoring to prevent this end by offering those around him a different course, a different “way” (see Matthew 7:12-14). Even if the end he foresaw could not be avoided, even if Jerusalem was too far gone, Jesus contrasted his teachings and alternate way with the “rock” the temple was built upon. The message to his own community was that only his teachings could intrinsically assure them of weathering the political storm ahead.

This leads me to one of the central questions of my own journey. Through everything I have experienced and learned over the years, I cannot shake the question of whether the teachings of Jesus, distilled from their first century Jewish/Roman context and applied to the social storms of our day, could liberate us as they liberated his 1st Century followers. Of course the details and contexts are different. But when I consider his teachings on nonviolence as opposed to violent revolution, his teachings on mutual aid and resource-sharing, his teachings about getting “loose” from an opponent while you are “on the way” (Q 12:58-59), all of these teachings show me a narrow path of survival on the way to the ultimate hope of a new human society, what King called A Beloved Community. In the Beloved Community, the human family has learned to relate to one another in a very different fashion than was practiced in the first century or is practiced today.

First, we must understand what Jesus said in his 1st Century, Jewish, socio-political, economic, and religious context. Then comes the hard work of distilling the principles behind his statements. And lastly we must rightly apply and practice those principles today. Rightly applying the principles and teachings of Jesus may be the hardest part in this process.

So again, for all of you who believe the sayings of Jesus have intrinsic value in informing the nonviolent confrontation, liberation, and transformation of our world into a safe,

more just, more compassionate home for us all, and for all of you who are working hard in your own way toward this end, I hope our Saying this week encourages you. We have a societal storm on the horizon as Jesus’s first followers did. In our practice, let’s build on bedrock and not sand.

To each of you out there who are endeavoring to “put into practice” the teachings of the historical Jesus, keep living in love, till the only world that remains is a world where only love reigns.

I love each of you dearly. Thanks for walking along side of us on this journey.