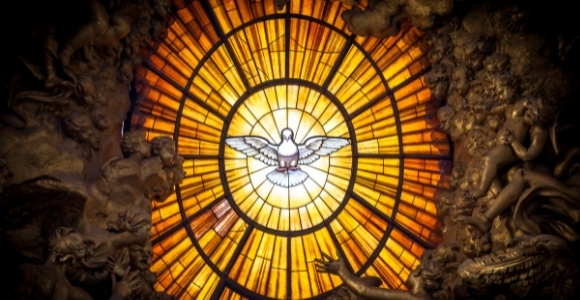 “The Jesus of John calls us to not let go of life but to take hold of it, to stand up for that which is life-giving, and to stand alongside the oppressed in our fight against injustice and death in all its expressions. May the same Advocate Spirit that took the side of the oppressed, marginalized, and those pushed to the edges of society in the Jesus story be found again, poured out on us as Jesus followers again today.”

Our readings this week are from John 15 and 16:

“When the Advocate comes, whom I will send to you from the Father, the Spirit of truth who comes from the Father, he will testify on my behalf. You also are to testify because you have been with me from the beginning. (John 15:26-27)

“But I have said these things to you so that when their hour comes you may remember that I told you about them. I did not say these things to you from the beginning, because I was with you. But now I am going to him who sent me; yet none of you asks me, ‘Where are you going?’ But because I have said these things to you, sorrow has filled your hearts. Nevertheless I tell you the truth: it is to your advantage that I go away, for if I do not go away, the Advocate will not come to you; but if I go, I will send him to you. And when he comes, he will prove the world wrong about sin and righteousness and judgment: about sin, because they do not believe in me; about righteousness, because I am going to the Father and you will see me no longer; about judgment, because the ruler of this world has been condemned. I still have many things to say to you, but you cannot bear them now. When the Spirit of truth comes, he will guide you into all the truth; for he will not speak on his own, but will speak whatever he hears, and he will declare to you the things that are to come. He will glorify me, because he will take what is mine and declare it to you. All that the Father has is mine. For this reason I said that he will take what is mine and declare it to you.” (John 16:4-15)

As we mentioned last week, these two passages belong to a section of John’s gospel referred to as the farewell discourses. John 16 includes themes repeated throughout farewell addresses: departure and Jesus being on the way to “the Father” (cf. John 13:33, 36-37; 14:2-4, 28), Jesus’ promise to send the Spirit as an advocate (cf. John 14:16, 26; 15:26), the work of the advocated to guide them into truth (cf. John 14:6, 16-17). It’s worth noting how clear and direct Jesus’ speech is in these passages compared to his parables and sayings in the synoptic gospels. In those versions of the Jesus story, Jesus speaks much more cryptically, in parables and metaphors. John does not include that kind of speech.

In the passage this week, Jesus uses the term advocate for the promise of the Spirit. This concept would have held a certain meaning for the original audience, the community of early Jesus followers. By the time John’s gospel was written, the rift between Christians and the Jewish people had become wide, and so John not only includes conflict between these two now-separate communities, but also an alarming amount of anti-Jewish descriptions and antisemitic characterizations of those referred to as “the Jews.” Given how Christians have treated our Jewish siblings throughout Christianity’s history, we must be extremely careful with the gospel of John, and not perpetuate stereotypes or actions that have harmed or even proven lethal to Jewish people. This caution applies to the term “advocate,” too.

Consider the following passages in John’s version of the Jesus story where being removed from the synagogue is a penalty for Jewish people who follow Jesus.

“His parents said this because they were afraid of the Jews; for the Jews had already agreed that anyone who confessed Jesus to be the Anointed would be put out of the synagogue.” (John 9:22)

“Nevertheless many, even of the authorities, believed in him. But because of the Pharisees they did not confess it, for fear that they would be put out of the synagogue.” (John 12:42)

For that first audience, “advocate” would have called to mind actual legal proceedings Jewish leaders initated against Jesus’ followers. The theme of being brought to trial appears in the early synoptic gospels as well:

“When they bring you to trial and hand you over, do not worry beforehand about what you are to say; but say whatever is given you at that time, for it is not you who speak, but the Holy Spirit.” (Mark 13:11)

“So make up your minds not to prepare your defense in advance; for I will give you words and a wisdom that none of your opponents will be able to withstand or contradict.” (Luke 21:14-15)

“When they bring you before the synagogues, the rulers, and the authorities, do not worry about how you are to defend yourselves or what you are to say; for the Holy Spirit will teach you at that very hour what you ought to say.” (Luke 12:11-12)

Can we reclaim this idea of advocacy in life-giving ways within our social context today?

Advocacy means to publicly support a particular community, cause or policy.

In the Hebrew scriptures, advocacy meant perceiving God’s role in our world (God as advocate of the oppressed) as well as the role God’s people were to fulfill.

“God judges in favor of the oppressed and gives food to the hungry.” (Psalm 146:7, italics added.)

“Learn to do good; seek justice, rescue the oppressed, defend the orphan, plead for the widow.” (Isaiah 1:17)

“Happy are those who are concerned for the poor; the Lord will help them when they are in trouble.” (Psalms 41:1)

“How terrible it will be for those who make unfair laws, and those who write laws that make life hard for people. They are not fair to the poor, and they rob my people of their rights. They allow people to steal from widows and to take from orphans what really belongs to them.” (Isaiah 10:1-2)

“Is not this the fast that I choose: to loose the bonds of injustice, to undo the thongs of the yoke, to let the oppressed go free, and to break every yoke?” (Isaiah 58:6)

“A bruised reed he will not break, and a dimly burning wick he will not quench; He will faithfully bring forth justice. He will not grow faint or be crushed until he has established justice in the earth . . . ” (Isaiah 42:3-4)

Too often, we as Christians have become fixated on helping people reach a post-mortem heaven or escape some mythical hell: our focus is always on tomorrow and never on today. But if we would be humble enough to learn from our Jewish siblings, remembering Jesus himself was a Jew long before the Christian religion ever existed, we would learn how to effectively engage systemic injustice in our world. The Jesus story calls Jesus’ followers to advocacy in the here and now. I so deeply appreciate the words of the late Rev. Dr. James H. Cone on this point:

“The Christian community, therefore, is that community that freely becomes oppressed, because they know that Jesus himself has defined humanity’s liberation in the context of what happens to the little ones. Christians join the cause of the oppressed in the fight for justice not because of some philosophical principle of “the Good” or because of a religious feeling of sympathy for people in prison. Sympathy does not change the structures of injustice. The authentic identity of Christians with the poor is found in the claim which the Jesus-encounter lays upon their own life-style, a claim that connects the word “Christian” with the liberation of the poor. Christians fight not for humanity in general but for themselves and out of their love for concrete human beings.” (James H. Cone; The God of the Oppressed, p. 135)

This weekend, we celebrate Pentecost, which memorializes the pouring out of the Spirit on the early church. What did it look like when this Advocate Spirit was poured out on Jesus? How did that Spirit characterize his life work?

“The Spirit [advocate] of the Lord is upon me, because he has anointed me to bring good news to the poor. He has sent me to proclaim release to the captives and recovery of sight to the blind, to let the oppressed go free, to proclaim the year of the Lord’s favor [cancellation of all debt].” (Luke 4:18-19, cf. Isaiah 61:1-2)

The Jesus story calls to us to have this same Spirit mark our lives today too!

I’ll close this week with words from Dr. Martin Luther King, Jr., that still give us much to consider:

This is especially applicable given the recent events in Palestine. The Jesus of John calls us to not let go of life but to take hold of it, to stand up for that which is life-giving, and to stand alongside the oppressed in our fight against injustice and death in all its expressions. May the same Advocate Spirit that took the side of the oppressed, marginalized, and those pushed to the edges of society in the Jesus story be found again, poured out on us as Jesus followers again today.

This Pentecost, may this be not merely our prayer, but our choice as well.

2. What does advocacy look like for you and how does it inform your own Jesus following? Discuss with your group.