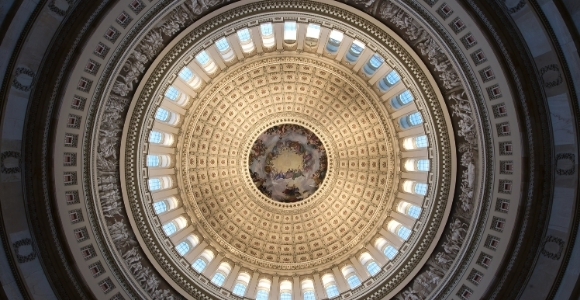 “As a White Jesus follower, all of these things weigh on me. The red-flag-warning parallels between our own story and the warning Jesus gave; the values acted on in last week’s events; the disparity between how law enforcement responded to the mob and how they respond to Black people; and lastly the disparities in our ability to analyze the actions of those at the U.S. the Capitol building on January 6, all deeply concern me and are a call, as in the above passage, to reflect, and again take life-giving, life-saving action. I pray it gives you cause to reflect and act too.”

In Mark’s gospel we read:

“When you see ‘the abomination that causes desolation’ standing where it does not belong—let the reader understand—then let those who are in Judea flee to the mountains.” (Mark 13:14, emphasis added.)

Jesus here is describing the desecration of sacred space as a red-alert warning to his followers. And before we write this passage off stating that the temple of which the passage is referring was religious “sacred” space, remember there was no separation of church and state in Jesus’ culture as we know that separation today. The temple was both religious and civic sacred space, the capitol of the Temple state that governed Jesus’ society as well. This speaks volumes to me in the wake of what we recently witnessed at the U.S. Capitol and at state capitols across this country. Within U.S. civic religion, many today consider the U.S. Capitol to be civic “sacred” space. I think of my Christian siblings who have so vocally supported President Trump over the last four years. And I question whether they will succeed or fail to see the events last week as yet another of the long list of red-flag-warnings within our context today. Let’s unpack this a bit.

The passage above is drawing the phrase “abomination that causes desolation” from Daniel and 1 Maccabees. This phrase originally referred to events that took place in the early 2nd Century B.C.E. The historical desecration this language originally referred to was Antiochus IV Epiphanes violating the Temple’s altar of burnt offering with an image of Zeus fashioned in Antiochus’ likeness.

Mark picks up this language to describe the events that led to the desecration and destruction of Jerusalem and the temple in 70 C.E. The language is apocalyptic and would have been familiar to Mark’s intended Jewish and Christian audience.

In this section of Mark’s gospel, Jesus is warning of false Messiahs and their deception of the people:

“At that time if anyone says to you, ‘Look, here is the Messiah!’ or, ‘Look, there he is!’ do not believe it. For false messiahs and false prophets will appear and perform signs and wonders to deceive, if possible, even the elect.” (Mark 12:21-23)

Here in the U.S., poor White people have a long history of being duped by false messianic political figures who stoke their worst fears, play to their own bigotry, and appeal to a base set of desires that ultimately prove to be death-dealing for them and often society at large.

This history goes all the way back to Bacon’s rebellion in 1675, when the elite hoped to protect their superior status and economic position by driving a wedge between Black enslaved people and poor whites. Having prevented these groups from forming an alliance, the elites then offered poor whites a “racial bribe:” special privileges that Black people would never receive.

In The New Jim Crow, Michelle Alexander writes, “White settlers were allowed greater access to Native American lands, white servants were allowed to police slaves through slave patrols and militias, and barriers were created so that free labor would not be placed in competition with slave labor. These measures effectively eliminated the risk of future alliances between black slaves and poor whites.” (p. 24) Poor whites now had a personal stake in a racialized system of injustice. Their plight did not improve much, but at least they were higher up than the Black slaves. Alexander adds: “Once the elite split the labor force, poor whites responded to the logic of their situation and sought ways to expand their racially privileged position” (pp. 24-25).

Today, elites in the U.S. are still driving wedges between the poor and working classes, and these wedges are along racist, sexist, homophobic, biphobic, and transphobic lines. James Baldwin wrote in The Fire Next Time, “I imagine one of the reasons people cling to their hates so stubbornly is because they sense, once hate is gone, they will be forced to deal with pain.” White Jesus followers today, rich or poor, must reclaim his warning against false messiahs as a call to examine our own pain. It can be for us a spring board to evaluating our own actions, determining whether they are rooted in truth and are holy and life-giving, or are profane and based in deception, bribery, and death-dealing.

What we saw at the Capitol building last week was a matter of people acting out their values. People who had been deceived into thinking they were fighting for “freedom” and against “tyranny” were actually fighting for four more years of bigotry, lies, autocracy, and a downward spiral into a cult of personality. Too few of us have developed the ability to think critically about what others tell us, and the people at the Capitol have been manipulated by political powers, wealthy elites, powerful corporations, and a president who doesn’t know how to emotionally deal with losing. These were not protestors calling for justice. They were an out-of-control mob deceived about the character of their actions, and deceived about the character of the man they choose to follow. If you trust and follow people who lie, cheat, show themselves to be bragging bullies, your end will be harm to yourself and others.

I watched the news the day after the mob stormed the Capitol and wondered why greater precautions weren’t taken. The crowd’s intentions were well known in advance. If Black Lives Matters groups had planned a protest at the Capitol building (as they have in the past) the National Guard would have been lining the steps of the Capitol building. Yet this White crowd of thousands of followers of the President overran the complex. Those who don’t believe White privilege exists in the U.S. need to take a step back and consider the stark disparity between security preparations in D.C. on January 6 and policing at any justice rally or protest.

I remember peacefully protesting with my 8th grade daughter in Baltimore in response to the murder of Freddie Gray years ago. Military sniper riffles were pointed at the crowd my daughter and I stood in at the rally on the lawn in front of Baltimore’s city hall. But on January 6 , police were pictured removing barriers blocking the mob and they took selfies with those who broke into the Capitol. Black people, people like those I stood with in Baltimore, would have all been shot. Law enforcement officers kill Black people in this country for nothing.

Last July, the President of the United States declared that anyone defacing or destroying federal property would be punished to the highest extent of the law. On January 6, that same president told those who desecrated and destroyed federal property that he loved them and they were “very special” people. It was never about protecting property but about the skin-color of those calling for change.

Lastly, the disparities in analysis by certain news outlets in our country is also heavy on my heart. I have listened to people I know personally referred to as “thugs,” “terrorists,” “rioters,” and “looters” over the past year. But these same news outlets called those involved in last week’s riots “patriots” and “freedom fighters.”

One of those involved was one of West Virginia’s very own: newly elected state official Delegate Derrick Evans (see Newly Elected Del. Derrick Evans Live-Streams Storming Of U.S. Capitol, A Newly Elected West Virginia Delegate Was Part Of The Pro-Trump Mob That Stormed The Capitol, and West Virginia lawmaker among rioters in Capitol). Another state legislator, W.V. State Senator Mike Azinger, a Republican from Wood county was also at the rally on January 6. Senator Azinger has since stated, “It was inspiring to be there and I hope he [Trump] calls us back.” (W.Va. senator who went to D.C. rally that turned into mob scene hopes Trump ‘calls us back’)

“Today, our children must know that this is not how democracy works. Democracy is determined by ballots, not bullets. Democracy rests on the peaceful transfer of power because of free and fair elections. We do not inflict violence on those with whom we disagree. We condemn today’s attack on democracy because this is a nation of laws, order, and decency.

All of those who participated in today’s attack on the capitol, especially those who unlawfully entered the building and perpetrated acts of violence, should be prosecuted fully by the law that undergirds our democracy.

We understand that an incoming delegate, Derrick Evans, videoed himself participating in such acts. There is no place for him in the WV Legislature.

When our state was born, it took tremendous strength to carve West Virginia out of a divided nation. We are divided again today. It will take all our better angels to heal us. We pledge to do our part in the halls of the West Virginia Capitol, and we call on all citizens to do their part. Check on your neighbors, help someone in need, engage with those who are different from you. That is how we will summon the strength needed to right this country again. By loving our neighbors throughout these majestic and grand hills of West Virginia.”

At the time that I write this, we here in WV are still waiting to see how Del. Derrick Evan’s actions will be evaluated and responded to. Some here who so strongly condemned the peaceful racial justice protests of last summer are calling him a hero.

As a White Jesus follower, all of these things weigh on me. The red-flag-warning parallels between our own story and the warning Jesus gave; the values acted on in this week’s events; the disparity between how law enforcement responded to the mob and how they respond to Black people; and lastly the disparities in our ability to analyze the actions of those at the U.S. the Capitol building on January 6, all deeply concern me and are a call, as in the above passage, to reflect, and again take life-giving, life-saving action.

I pray it gives you cause to reflect and act too.

2. What do the disparities mentioned above speak of to you? Discuss with your HeartGroup.