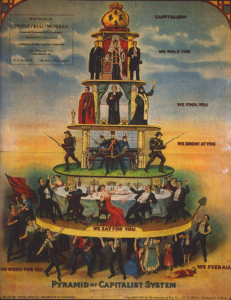 “Politics answers the question of who gets what. So Jesus was not a religious figure as much as he was a political one. He did not fundamentally challenge his Jewish religion, at least not much more than his predecessor Hillel did. He did challenge the Jewish elites of his time, much more than Hillel did. As we’ve discussed before, Hillel made concessions, such as the prozbul, that centered the wealthy while endeavoring to take care of the poor. Jesus’ teachings centered the poor and gave them the entire “kingdom.” Jesus’ teachings were political.”

The domination structure of Jesus’ society was similar to ours today. Its structure was a combination of two two-dimensional shapes, a triangle and a circle.

Let’s talk about the circle first.

Circles have an inside and an outside. Societies shaped in the form of a circle can have a strongly defined border that distinguishes between insiders and outsiders. They can also have certain tests to decide who’s in and who’s out. Societal circles can also have people whose job it is to patrol the border to make sure no one from the outside is included and everyone knows when someone who was previously an insider no longer should be.

What about the triangle?

The circle and the triangle are both hierarchical structures. Where the hierarchy in the circle is from the center out toward the margins, triangular societies have a top comprised of a few elites and a base composed of the majority. In triangles that practice domination and control, the closer one is to the top, the more power, privilege, control and ability to dominate others one also possesses. Your social location in the triangle determines the level to which you experience these privileges, and you can find yourself closer to the top in some areas of your life but closer to the bottom of the triangle in others. The triangle typically is structured to benefit those at the top at the expense and exploitation of those at the bottom.

What happens when we combine these structures?

This hybrid of the circle and triangle shapes, the cone, is the shape of the society Jesus lived in in the 1st Century. It’s also the shape of many of our religious and civil societies today. In Luke’s version of the Jesus story, Jesus states that people his society structure had made poor, hungry, or weep would be specifically “blessed” by his vision for transforming human society. Jesus wasn’t saying it’s a blessing to be on the margins or at the bottom of society. He was saying that if you’re on the margins, you who his gospel was especially for. As we discussed in Directed Good News, those on the margins in Jesus’ society heard his gospel as good news.

Matthew’s version of the Jesus story backs this up too. As we discussed last month in A Preferential Option for the Vulnerable, people the system had left too broken and impoverished in their spirit to keep trying, those whom the system had steamrolled over, those who hungered and thirsted for the world to be put right—these were the ones Jesus’ vision for humanity was especially targeted at (see Matthew 5:3; Luke 1:80; Matthew 5:5 and 5:6.[1]) These were the ones who had been labeled as “sinners” by those at the center/top of their society, and who, because of that labelling, had been pushed to the edges and underside of their community. They were drawn to the hope for change in Jesus’ gospel: “Now the tax collectors and sinners were all gathering around to hear Jesus. But the Pharisees and the teachers of the law muttered, ‘This man welcomes sinners and eats with them.’”(Luke 15:1-2) The term “sinners” is not a universal term here. It is used pejoratively to push some to the margins and bottom of the cone. It was a label those in power used to other people.

Jesus’ vision for human community, his shared table, specifically inclused those his cone-shaped society had excluded. It also had an economic component. Consider the reversal of economic exploitation and reparation found in Luke’s story of an oppressor who embraced Jesus’ teachings.

“All the people saw this and began to mutter, ‘He has gone to be the guest of a sinner.’ But Zacchaeus stood up and said to the Lord, ‘Look, Lord! Here and now I give half of my possessions to the poor, and if I have cheated anybody out of anything, I will pay back four times the amount.’” (Luke 19:7-8)

Jesus’ shared table required those at the top/center of their societal cone to pay reparations to those whom they had exploited and pushed down. Tax collectors were economically part of the elite, but socially and politically within Jewish culture they were pushed to the outside and labeled as sinners because of their occupational cooperation with the Empire subjugating Judea and Galilee. They were privileged in certain areas of their lives but marginalized in others.

When I use the term “political,” I don’t mean partisan. Politics means related to the polis, the members of a community. Whenever you have two or more people doing life together, you have politics. Politics answers the question of who gets what. So Jesus was not a religious figure as much as he was a political one. He did not fundamentally challenge his Jewish religion, at least not much more than his predecessor Hillel did. He did challenge the Jewish elites of his time, much more than Hillel did. As we’ve discussed before, Hillel made concessions, such as the prozbul, that centered the wealthy while endeavoring to take care of the poor. Jesus’ teachings centered the poor and gave them the entire “kingdom.” Jesus’ teachings were political.

Recently, while chatting with a friend, I bumped into an often repeated misconception of how things worked in Jesus’ society. My friend claimed that Jesus never challenged the Roman civil government but only challenged the religious establishment of Judea. My friend went on to state that Jesus’ followers should ignore the state and simply focus on bringing about religious reform within their own traditions.

This is far from how Jewish society actually functioned in the 1st Century. Today our culture believes that church and state should be separated. But Jesus’ society didn’t have these distinctions. My friend claimed that Jesus was only focused on impacting the religious views of his community, especially as they related to the temple. But this simply isn’t true, historically.

First, the temple was not solely religious, and it was not merely the center of the Jewish “church.” The temple was the center of the Jewish state. The priests and the Sanhedrin were civil authorities, not only religious ones. In 1st Century Judea, there was not a separation between “church and state” or religious and civil duty as we understand either today. The Torah governed both, and they were not two distinct areas of life. They were just life.

The temple received taxes that were to be redistributed to the poor. That’s why the temple functioned as a centralized banking system through which money lenders lent their monies. When the poor took over the temple in the 60s CE, the very first thing they did was to burn the debt ledgers of the temple, which until then recorded all loans. By storming the temple, they forced political and economic change: a year of Jubilee and the forgiveness of all debts.

Secondly, Jesus was a Jewish laborer, not a Roman citizen. He didn’t have access to Rome to protest for change. But he did have access to his own state authority, the temple in Jerusalem. Note that even this distinction between the temple and Rome is not completely accurate either. Rome governed Judea through the temple. Rome determined who would be High Priest each year, and it was the temple that funneled collected tribute back to Rome. The Jewish aristocracy gained privilege and power by cooperating with Rome, and Rome received a degree of control over Judea by using the Jewish temple state in Jerusalem.

So when Jesus overturned tables in the temple-state, this was not only a religious protest; it was political protest as well. Jesus staged his demonstration in the temple with the money changers in solidarity with and on behalf of the poor who were being economically exploited by the Temple-state. Jesus was indicting both Rome and his own state. This is why his execution in response to the temple demonstration was at the hand of Rome, on a Roman cross.

Ched Myers confirms this in his commentary on the book of Mark, and notes the deep implications for all who should choose to follow this political Jesus.

“Jesus has revealed that his messiahship means political confrontation with, not rehabilitation of, the imperial state. Those who wish to ‘come after him’ will have to identify themselves with his subversive program. The stated risk is that the disciple will face the test of loyalty under interrogation by state authorities.” (Binding the Strong Man: a political reading of Mark’s story of Jesus, p. 247)

When answering the question of who should get what, Jesus stated his political views:

“Do not be afraid, little flock, for your Father has been pleased to give you the kingdom. Sell your possessions and give to the poor. Provide purses for yourselves that will not wear out, a treasure in heaven that will never fail, where no thief comes near and no moth destroys. For where your treasure is [in people not profit], there your heart will be also.” (Luke 12.32-34)

The poor, the marginalized, the pushed down, these were those to whom Jesus’ political views were good news. What he taught them was the gospel of hope. Gustavo Gutierrez accurately reminded us that this hope is more than a forward expectation of charity. This hope is for the creation of an entirely different social order:

“Love of neighbor is an essential component of Christian life. But as long as I apply that term only to the people who cross my path and come asking me for help, my world will remain pretty much the same. Individual almsgiving and social reformism is a type of love that never leaves its own front porch . . . On the other hand my world will change greatly if I go out to meet other people on their path and consider them as my neighbor, as the good Samaritan did… The gospel tells us that the poor are the supreme embodiment of our neighbor. It is this option that serves as the focus for a new way of being human and Christian in today’s Latin America. But the existence of the poor . . . is not neutral on the political level or innocent of ethical implications. Poor people are by-products of the system under which we live and for which we are responsible . . . That is why the poverty of the poor is not a summons to alleviate their plight with acts of generosity but rather a compelling obligation to fashion an entirely different social order.” (Gustavo Gutiérrez; Liberation Praxis and Christian Faith, p. 14)

When we follow Jesus, we don’t build a pyramid, a circle, or a cone. We build a shared table.

I’m so glad you checked in with us this week.

Wherever you are, keep living in love, in survival, resistance, liberation, reparation, and transformation.

I love each you dearly.

To support these weekly podcasts and eSights and help us grow, go to renewedheartministries.com and click “Donate”!

[1]
Matthew 5:3—“Blessed are the poor in spirit, for theirs is the kingdom of heaven.”

Luke 1:80—And the child grew and became strong in spirit; and he lived in the wilderness until he appeared publicly to Israel.

Matthew 5:6—Blessed are those who hunger and thirst for righteousness, for they will be filled.