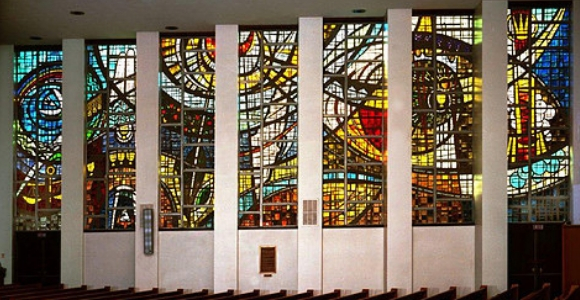 Main Sanctuary Stained Glass Windows of Tree of Life* Or L’Simcha Congregation. “This set of seven windows illustrates the Acceptance of God’s Law, holidays, the life cycle, and how human-beings should care for the earth and one another.”

This past weekend, a deadly mass shooting occurred at Tree of Life * Or L’Simcha Congregation in Pittsburg, PA.  Eleven people were killed. Nine people were injured.  The Anti-Defamation League has stated that the shooting is the deadliest attack on the Jewish community in the history of the United States.

Renewed Heart Ministries stands in solidarity with our Jewish friends, neighbors and loved ones as we condemn and oppose Anti-Semitism in all its varied forms. Our hearts are with the families of the victims and the survivors. These are the names of those whose lives were taken.

It should be noted that Rose Mallinger (97) was a holocaust survivor.

In the Talmud we read:

“Whoever destroys a soul, it is considered as if he destroyed an entire world.”
(Mishnah Sanhedrin 4:5; Yerushalmi Talmud 4:9, Babylonian Talmud Sanhedrin 37a)

I agree with Paul Brandeis Raushenbush, Senior Vice-President, and editor of Voices at Auburn Seminary, whom I believe rightly states, “On such days as today, when blood stains the sacred space of the Jewish people, we must be clear that today’s atrocity is not an isolated event.  The anti-Semitism of the Tree of Life killer is part of a wider white-Christian-supremicist framework that has infected our country since our beginning . . .” (Read AMERICA’S CHOICE: THE TREE OF LIFE OR WHITE SUPREMACY)

With Raushenbush, I, too, believe all persons of faith and/or goodwill have choices to make, right now.

As Rabbi Michael Lerner, Editor-In-Chief of Tikkun wrote this weekend, “Our efforts to build a peaceful world require us to act peacefully now and always – to breakdown walls of separation with bridges of connection, to crack open aching hearts with fierce love and compassion, to critique and challenge evil behavior without diminishing the humanity of the actor. We stand in solidarity with all the “others” of our society whose lives are threatened and endangered by acts of violence and continue to commit to loving the stranger, the “other.” In the final analysis, the only real way to “resist” the growth of fascistic consciousness is to build a movement that replaces “American first” with “love first.” (Read Solidarity After the Massacre of Jews in Pittsburgh….and How Best to Defend Ourselves)

We at Renewed Heart Ministries choose the resistance of “love first” rather than hate. We will continue to daily take up the work of engaging the intersection of faith, love, compassion and justice. We will continue educating followers of Jesus, especially, in regards to the role Christianity has played in harming the Jewish community as well as other communities who have also been marginalized and harmed by us. We will continue to work together alongside targeted communities to heal our world, reshaping it into a compassionate, just and safe home for all; or, as our Jewish friends say, “the work of Tikkun Olam.”

Our hearts hurt with you,