The Civil War as a Theological Crisis
by Mark A. Noll 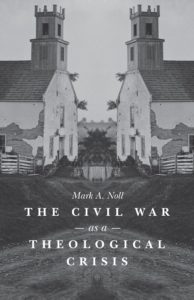 “Though the Christians on all sides agreed that the Bible was authoritative, their iterpretations of slavery in Scripture led to a full-blown theological crisis.”

Noll’s volume is especially helpful in understanding what happens today when people calling for social change for minorities are accused of being “against the clear teachings of scripture”:

“On the other front, nuanced biblical attacks on American slavery faced rough going precisely because they were nuanced. This position could not simply be read out of any one biblical text; it could not be lifted directly from the page. Rather, it needed patient reflection on the entirety of the Scriptures; it required expert knowledge of the historical circumstances of ancient Near Eastern and Roman slave systems as well as of the actually existing conditions in the slave states; and it demanded that sophisticated interpretative practice replace a commonsensically literal approach to the sacred text.” Mark A. Noll, The Civil War as a Theological Crisis (Kindle Locations 647-649).

“In an informative account of the theological dramas that underpinned and were unleashed by the Civil War, Noll (America’s God) argues that mid–19th-century America harbored “a significant theological crisis.” Quite simply, ministers disagreed about how to read the Bible—and as much as it was a result of fierce disagreements about slavery or Union, Noll says, the Civil War was a crisis over biblical interpretation. The Bible’s apparent acceptance of slavery led Christians into bitter debates, with Southern proslavery theologians detailing an elaborate defense of the “peculiar institution” and Northern antislavery clerics arguing that the slavery found in the Old Testament bore no resemblance to the chattel slavery of Southern plantations. Noll detours, for several chapters, to Europe, analyzing what Christians there had to say about America’s sectional and scriptural debates. He suggests that religious upheaval did not evaporate at Appomattox. In the postbellum years, Americans grappled with two great problems of “practical theology”: racism, and the convulsions of capitalism. This book’s substantive analysis belies its brevity. As today’s church debates over homosexuality reveal a new set of disagreements about how to read the Bible, this slim work of history is surprisingly timely. (Apr. 24)

Remember, if you use Amazon.com, please consider using Amazon Smile and selecting Renewed Heart Ministries as your charity to support our work at no additional cost to yourself. You can do so at: http://smile.amazon.com/ch/20-8663541