News
RHM has a new logo!

We recently updated the logo for Renewed Heart Ministries, upgrading from a pixel-based graphic to a vector image. This is the third update to RHM’s logo over the last nine years, and we thought now would be a perfect time to share the history of our logo’s metamorphosis.

Our original 2007 logo was made up of three elements: light, a heart, and a cross.

From the beginning of our work, we’ve been passionate about illuminating the darkness. Whether we were using information to illuminate ignorance, truth to illuminate misunderstanding, or love to illuminate fear, selfishness, or hatred, we’ve always been motivated by two statements from the canonical gospels on light, Jesus, and Jesus’s followers:

The heart in our logo reminds us to focus on change taking place within each of us rather than just in the form of mere outward conformity to a set of rules, ethics, or moral guidelines. Renewing human hearts by being a source of light in the darkened sectors of our world is at the heart of all we do.

This element is also based on these passages in the gospels.

“If then the light within you is darkness, how great is that darkness!” (Matthew 6:23)

When we began this work in 2007, we believed that everything we did centered on the light (insight and truth) streaming from the cross of Jesus. We did not believe that Jesus’ death satisfied the demands of retributive cosmic justice. Rather we taught that Jesus revealed love for his enemies in his death and forgiveness—bearing the trespasses of others against one— toward the entire world.

Then in 2012 we began to perceive something deeper within the gospel stories that would lead to our first logo change two years ago.

We made this graphic change as we digested the truth that the good news the early church proclaimed was not primarily that Jesus was executed but that he had been resurrected. We were inspired by these texts:

“With great power the apostles continued to testify to the resurrection of the Lord Jesus.” (Acts 4:33, emphasis added.)

“We tell you the good news: What God promised our ancestors he has fulfilled for us, their children, by raising up Jesus.” (Acts 13:32,33, emphasis added.)

“Paul was preaching the good news about Jesus and the resurrection.” (Acts 17:18, emphasis added.)

“This man was given to you by God’s deliberate plan and foreknowledge; and you, with the help of wicked men, put him to death by nailing him to the cross. But God raised him from the dead.” (Acts 2:23-24, emphasis added.)

“You killed the author of life, but God raised him from the dead. We are witnesses of this.” (Acts 3:15, emphasis added.)

“It is by the name of Jesus Christ of Nazareth, whom you crucified but whom God raised from the dead . . .” (Acts 4:10, emphasis added.)

“The God of our ancestors raised Jesus from the dead—whom you killed by hanging him on a cross.” (Acts 5:30, emphasis added.)

“We are witnesses of everything he did in the country of the Jews and in Jerusalem. They killed him by hanging him on a cross, but God raised him from the dead . . .” (Acts 10:39-40, emphasis added.)

Though they found no proper ground for a death sentence, they asked Pilate to have him executed. When they had carried out all that was written about him, they took him down from the cross and laid him in a tomb. But God raised him from the dead. (Acts 13:29-30, emphasis added.)

For he has set a day when he will judge the world with justice by the man he has appointed. He has given proof of this to everyone by raising him from the dead.” (Acts 17:31)

Jesus died for standing up to the status quo in solidarity with the exploited and disinherited of his day. The resurrection symbolizes Divine protest against Jesus’s execution, the undoing and reversal of his death. As he laid in the tomb, yet another occurrence of extinguished hope in the hearts of the oppressed and subjugated, his followers asked whether the violence of domination and oppression would ever be reversed. When they discovered Jesus’s empty tomb, they asked a new set of questions: Was the body moved to a more permanent resting place? Was the body taken and hidden? Or did they dare hope for more? Did they dare to hope that the Universe is actually on the side of the oppressed and subjugated after all?

We included the empty tomb in our logo to help us remember this Divine protest. Even today, the light streaming from Jesus’s empty tomb renews, for those who have lost all hope, the hope that this world can ultimately become a safer and more compassionate home for us all. 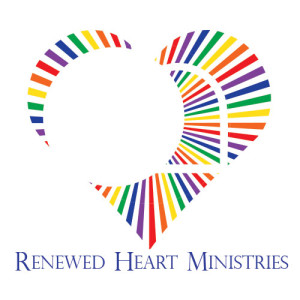 This year, we had some technical reasons for moving away from our old pixelated logo. Anyone who works with logos will tell you that logos are meant to be vector. They look cleaner and scale well.

We didn’t want to lose our old elements: the heart, the empty tomb, the light that illuminates our hearts and shining from the empty tomb.

But we also wanted to do something that visually represented the light that we experience and teach about at Renewed Heart Ministries.

Light, after all, is not really just one color (white). Light is a spectrum of colors. And what could be more fitting for this community? It takes all of our voices to make the world a safer, more compassionate place. It takes valuing each person’s story and experience. Many times we are neither this nor that, but find ourselves somewhere on a spectrum with multiple philosophies or identities, and it’s these various colors shining in our hearts and out for all to see that make our world a beautiful place.

So our logo is still composed of three main elements: focus on changed hearts, hope from Jesus’s open, empty tomb, and light outshining the oppression in our world. And this light represents the combined participation and inclusion of every one of us.

With happy hearts, renewed hope, and an inclusive welcome, we introduce to you our new vector logo for Renewed Heart Ministries: 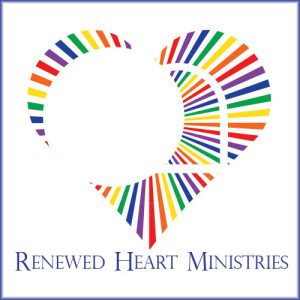 Thank you for joining us on this journey.