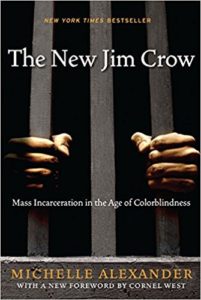 In the Gospel of Luke, Jesus begins his ministry with these words: “The Spirit of the Lord is on me, because he has anointed me to proclaim good news to the poor. He has sent me to proclaim freedom for the prisoners . . .”  (Luke 4.18)

In every civil society where domination and subjugation are practiced there is a direct connection between liberation of the oppressed and setting free those whom society has imprisoned.  This month we are proud to include Michelle Alexander’s The New Jim Crow: Mass Incarceration in the Age of Colorblindness in our 2018 reading course.

“‘Jarvious Cotton’s great-great-grandfather could not vote as a slave. His great-grandfather was beaten to death by the Klu Klux Klan for attempting to vote. His grandfather was prevented from voting by Klan intimidation; his father was barred by poll taxes and literacy tests. Today, Cotton cannot vote because he, like many black men in the United States, has been labeled a felon and is currently on parole.’

As the United States celebrates the nation’s “triumph over race” with the election of Barack Obama, the majority of young black men in major American cities are locked behind bars or have been labeled felons for life. Although Jim Crow laws have been wiped off the books, an astounding percentage of the African American community remains trapped in a subordinate status–much like their grandparents before them.

In this incisive critique, former litigator-turned-legal-scholar Michelle Alexander provocatively argues that we have not ended racial caste in America: we have simply redesigned it. Alexander shows that, by targeting black men and decimating communities of color, the U.S. criminal justice system functions as a contemporary system of racial control, even as it formally adheres to the principle of color blindness. The New Jim Crow challenges the civil rights community–and all of us–to place mass incarceration at the forefront of a new movement for racial justice in America.”

It is our hope that your heart will be renewed and inspired to take action as we together endeavor to follow Jesus’ teachings more deeply in this context.  May we continue engaging the work found in Luke’s gospel of “freedom for the prisoners, and the recover of sight to those who are blind.”

Contrary to the rosy picture of race embodied in Barack Obama’s political success and Oprah Winfrey’s financial success, legal scholar Alexander argues vigorously and persuasively that [w]e have not ended racial caste in America; we have merely redesigned it. Jim Crow and legal racial segregation has been replaced by mass incarceration as a system of social control (More African Americans are under correctional control today… than were enslaved in 1850). Alexander reviews American racial history from the colonies to the Clinton administration, delineating its transformation into the war on drugs. She offers an acute analysis of the effect of this mass incarceration upon former inmates who will be discriminated against, legally, for the rest of their lives, denied employment, housing, education, and public benefits. Most provocatively, she reveals how both the move toward colorblindness and affirmative action may blur our vision of injustice: most Americans know and don’t know the truth about mass incarceration—but her carefully researched, deeply engaging, and thoroughly readable book should change that. (Feb.)  Copyright © Reed Business Information, a division of Reed Elsevier Inc. All rights reserved

“Michelle Alexander’s brave and bold new book paints a haunting picture in which dreary felon garb, post-prison joblessness, and loss of voting rights now do the stigmatizing work once done by colored-only water fountains and legally segregated schools. With dazzling candor, Alexander argues that we all pay the cost of the new Jim Crow.“—Lani Guinier, professor at Harvard Law School and author of Lift Every Voice: Turning a Civil Rights Setback into a New Vision of Social Justice and The Miner’s Canary: Enlisting Race, Resisting Power, Transforming Democracy

“For every century there is a crisis in our democracy, the response to which defines how future generations view those who were alive at the time. In the 18th century it was the transatlantic slave trade, in the 19th century it was slavery, in the 20th century it was Jim Crow. Today it is mass incarceration. Alexander’s book offers a timely and original framework for understanding mass incarceration, its roots to Jim Crow, our modern caste system, and what must be done to eliminate it. This book is a call to action.”—Benjamin Todd Jealous, President and CEO, NAACP

“With imprisonment now the principal instrument of our social policy directed toward poorly educated black men, Michelle Alexander argues convincingly that the huge racial disparity of punishment in America is not the mere result of neutral state action. She sees the rise of mass incarceration as opening up a new front in the historic struggle for racial justice. And, she’s right. If you care about justice in America, you need to read this book!”—Glenn C. Loury, economist at Brown University and author of The Anatomy of Racial Inequality and Race, Incarceration and American Values

“After reading The New Jim Crow, Michelle Alexander’s stunning work of scholarship, one gains the terrible realization that, for people of color, the American criminal justice system resembles the Soviet Union’s gulag—the latter punished ideas, the former punishes a condition.”—David Levering Lewis, Pulitzer-prize winning historian at NYU and author of W.E.B. Du Bois: The Fight for Equality and the American Century, 1919-1963

“We need to pay attention to Michelle Alexander’s contention that mass imprisonment in the U.S. constitutes a racial caste system. Her analysis reflects the passion of an advocate and the intellect of a scholar.”—Marc Mauer, Executive Director, The Sentencing Project, author of Race to Incarcerate

“A powerful analysis of why and how mass incarceration is happening in America, The New Jim Crow should be required reading for anyone working for real change in the criminal justice system.”—Ronald E. Hampton, Executive Director, National Black Police Association