News
Nonviolence and the Atonement 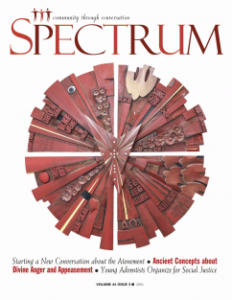 Adventist Forum, publishers of SPECTRUM and spectrummagazine.org, is an independent, progressive, non-profit organization committed to promoting community through conversation in the Seventh-day Adventist Church.

I received an invitation earlier this year to participate in their annual conference on nonviolence this fall in Silver Spring, Maryland.  Nonviolence and the Atonement was the topic chosen.  Gregory Boyd of Woodland Hills Church and reknew.org was their keynote.  Other presenters included William Johnson, Keisha McKenzie, Jean Sheldon, Richard Rice, Charles Scriven, Ronald Osborne, and myself.

Some of the highlights of the weekend were calls to understand the violence of Jesus’ execution through the lens of the experiences of those already on the underside of our society.  Sheldon gave an excellent presentation on Babylonian culture, Hebrew culture and the relevance of those cultures’ influences on our various interpretations of the atonement.  Osborn gave a superb summary of the work of the late René Girard.  McKenzie’s presentation, The Violence of Silence, named the violence of how the Adventist church has remained silent throughout most of its history in matters relating to justice for the oppressed. Two of the silences named were Adventist’s silence in the face of Native American injustice during the formation of the Adventist faith tradition, and the later silence in regards to slavery in the South as Adventism’s borders expanded.

I delivered the final presentation of the weekend on Sunday.  My topic concerned nonviolent critiques of what Christians call the Atonement that merely reject Penal Substitutionary Atonement, but fail to also recognize the violence within such explanatory theories as the Moral Influence theory and Christus Victor.  Debates regarding those three (actually they can be expanded to six) theories regarding possible salvific “purposes” for Jesus’ unjust execution represent a very small portion, globally, of theological understanding. These three ways of explaining Jesus’ execution have historically risen out of male experiences in Europe and America. And as Jacquelyn Grant so aptly wrote in her volume White Women’s Christ and Black Women’s Jesus, “Theology as developed in Europe and America is limited when it approaches the majority of human beings.” (p.1)

As an option in our efforts toward understanding the Jesus story in a way that empowers us to embrace Jesus’ radical teachings on nonviolent resistance, survival, liberation, restoration and transformation, I offered listening to the voices and experiences of those outside of male dominated theories from Europe and America.  (I’ll give a list of some of the quotations I collected for this presentation at the bottom of this entry.*) These voices offer viable alternatives to understanding the Jesus story.  These experiences, as well as the theologies that arise out of these experiences include the critiques and alternatives of Liberation theologians, Black Liberation theologians, Feminist theologians, Womanist theologians and even our Queer theologians. The alternatives that arises out of these broader and more varied experiences I believe offer much promise and hope for positive change, not just in how we interpret the Jesus story itself, but how our stories may become more holistically aligned with his as we work together in our world’s maturing toward a safe, more compassionate, less violent home for us all.

I want to deeply thank the Adventist Forum for the invitation to participate in this year’s conference.  I met so many wonderful people.  I also had the chance to meet a few scholars/teachers, who were in attendance, that I have desired to meet for years.  And to those of you who follow Renewed Heart Ministries from all over the U.S and Canada who choose to attend this conference, thank you, too!  It was such a pleasure to spend time with each of you during the weekend. This was the highlight of my year.  To all who participated in this weekend, either organizing, presenting, or attending, thank you.  I’m deeply grateful for the space we shared together. This weekend was a welcome reminder that the future remains bright!  Here’s to a world where all violence, oppression and injustice have been put right.

I’ll post a link to the presentations as soon as they are available.

Here is an additional link to an interview I gave leading up to this event.

*James H. Cone, A Black Theology of Liberation: “What is most ironic is that the white lynchers of blacks in America were not regarded as criminals; like Jesus, blacks were the criminals and insurrectionists. The lynchers were the “good citizens” who often did not even bother to hide their identities. They claimed to be acting as citizens and Christians as they crucified blacks in the same manner as the Romans lynched Jesus . . . White theologians in the past century have written thousands of books about Jesus’ cross without remarking on the analogy between the crucifixion of Jesus and the lynching of black people.” (pp. 158-159).

James H. Cone, The Cross and the Lynching Tree: “The cross places God in the midst of crucified people, in the midst of people who are hung, shot, burned, and tortured.” (p. 26)

Brown and Parker, For God So Loved the World?: “The central image of Christ on the cross as the savior of the world communicates the message that suffering is redemptive.” (p. 2)

Elizabeth Bettenhausen, Christianity, Patriarchy and Abuse: “Christian theology has long imposed upon women a norm of imitative self-sacrifice base on the crucifixion of Jesus of Nazareth. Powerlessness is equated with faithfulness.  When the cross is also interpreted as the salvific work of an all-powerful paternal deity, women’s well being is as secure as that of a child cowering before an abusive father.”   (p. xii; edited by Joanne Carlson Brown & Carole R. Bohn)

Brown and Parker, For God So Loved the World?: “The problem with this theology is that it asks people to suffer for the sake of helping evildoers see their evil ways. It puts concern for the evildoers ahead of concern for the victim of evil. It makes victims the servants of the evildoers’ salvation.” (Ibid., p. 20.)

Delores S. Williams, Sisters in the Wilderness: The Challenge of Womanist God-Talk: “In this sense Jesus represents the ultimate surrogate figure; he stands in the place of someone else: sinful humankind. Surrogacy, attached to this divine personage, thus takes on an aura of the sacred. It is therefore fitting and proper for black women to ask whether the image of a surrogate-God has salvific power for black women or whether this image supports and reinforces the exploitation that has accompanied their experience with surrogacy.” (p.127)

Joan Carlson Brown & Rebecca Parker; Christianity, Patriarchy and Abuse: “It is not the acceptance of suffering that gives life; it is commitment to life that gives life. The question, moreover, is not Am I willing to suffer? but Do I desire fully to live? This distinction is subtle and, to some, specious, but in the end it makes a great difference in how people interpret and respond to suffering.” (p.18, edited by Joanne Carlson Brown & Carole R. Bohn)

Elizabeth Bettenhausen; Christianity, Patriarchy and Abuse: “Several years ago I asked a group of seminarians to choose New Testament stories about Jesus and rewrite them imagining that Jesus had been female. The following recreation of the passion story of Luke 22.54-65 was on woman’s knowing by the heart.

‘They arrested the Christ woman and led her away to the Council for questioning. Some of her followers straggled along to find out what was to become of her.  There were seven women and two men followers. (The men followers were there mainly to keep watch over their sisters.) Someone from among the crowd asked a question of a man follower, ‘Haven’t I seen you with this woman? Who is she, and what is your relationship with her?’ He replied defensively, ‘She is a prostitute, she has had many men. I have seen her with many!’  The men who were guarding the Christ [woman] slapped her around and made fun of her. They told her to use magic powers to stop them. They blindfolded her and each them in turn raped her and afterward jeered, ‘Now, prophetess, who was in you? Which one of us? Tell us that!’ They continued to insult her.'(Kandice Joyce)

After this story was read aloud, a science surrounded the class and made us shiver. Ever since, I have wondered Would women ever imagine forming a religion around the rape of a woman? Would we ever conjure gang-rape as a salvific event for other women? What sort of god would such an event reveal?” (p. xi-xii, edited by Joanne Carlson Brown & Carole R. Bohn)

Karen Baker-Fletcher, My Sister, My Brother; Womanist and Xodus God Talk: “If Jesus is on the side of the least of these, as Matthew 25 suggests and womanist liberation theologians emphasize, then this includes the earth.  It too is hungry for nourishment.  It too is increasingly impoverished.”

Delores S. Williams, Sisters in the Wilderness: The Challenge of Womanist God-Talk: It seems more intelligent and more scriptural to understand that redemption had to do with God, through Jesus, giving humankind new vision to see the resources for positive, abundant relational life. Redemption had to do with God, through the ministerial vision, giving humankind the ethical thought and practice upon which to build positive, productive quality of life. Hence, the kingdom of God theme in the ministerial vision of Jesus does not point to death; it is not something one has to die to reach. Rather, the kingdom of God is a metaphor of hope God gives those attempting to right the relations between self and self, between self and others, between self and God as prescribed in the sermon on the mount, in the golden rule and in the commandment to show love above all else. (pp. 130-131)