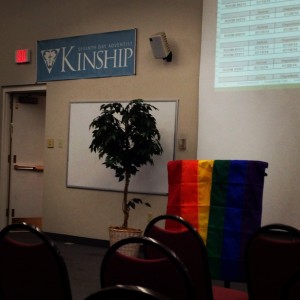 “If you had known what these words mean, ‘I desire mercy, not sacrifice,’ you would not have condemned the innocent.”—Jesus (Matthew 12.7)

Someone once said, “The truth as it is in Jesus can be experienced, but never explained.” How do you describe in words what someone experiences at a Kinship Kampmeeting?

This summer, I was privileged and humbled to be a part of 2014’s lineup of Kampmeeting speakers. Besides me were Wendy Gritter (author of Generous Spaciousness), Todd Leonard (pastor of the Glendale City Seventh-day Adventist Church) and Eliel Cruz (president of Intercollegiate Adventist Gay-Straight Alliance Coalition).

When I was first invited to be a speaker at Kinship Kampmeeting, I must confess, I was a bit naive. I envisioned that I would, within my four presentations, share a Girardian retelling of the Jesus narrative that would offer hope for those who are being scapegoated religiously, politically, economically and socially as a result of their orientation. What I didn’t realize is that I was about to have my world turned upside down as I encountered something I had never experienced. For two decades now, I have been traveling from place to place within Adventism, and never before have I witnessed an environment that involved such healing authenticity, such love for Jesus (and one another) and such wrestling with Jesus as I experienced being among this group of Christian brothers and sisters who identify also as LGBTIQ (or lesbian, gay, bisexual, transgender, intersex and queer; “alphabet people.”) I came face to face with countless stories of those who had been forced into deep introspection as they wrestled, sometimes alone, with the collision of their own sexuality and the hetero-normative faith many had been raised in. To be honest, some had navigated the journey beautifully, others had become casualties, and others were still on that journey. But what I found breathtakingly beautiful was that I was encountering for the first time within Adventism a safe place for all, regardless of where on this journey they found themselves today. On Friday night, as we came together around a shared table upon which were the emblems of our Jesus who was broken and spilled out as He stood in solidarity with the oppressed in every generation, something inside of me changed forever. I had gone there thinking I would share with them, but what I discovered was a group that had recaptured what Jesus called the Kingdom, as well as a group of people who are particularly gifted because of their experiences to teach the rest of the Church what the Kingdom really looks like.

I had so many beautiful experiences, and space here does not permit me to recount them all…but I will share just one. At the end of my week, a dear, dear sister, whom I would later discover had been an agnostic for most of the last thirty years as a result of hetero-hierarchical faith, walked up to my daughter, who was standing beside me. She pointed at my daughter sternly and said, “You be careful hanging around that man right there,” then pointed at me.
My daughter innocently asked, “Why?”

My daughter was puzzled. “Dangerous?”

My new friend hung her head and said quietly, “Yes, dangerous. He can make even an old agnostic begin to have the courage to believe once again.”

May we all have the courage to listen to our LGBTIQ brothers and sisters in Jesus. We all have so much still to learn…till the only world that remains is a world where Christ’s love reigns.

(The four presentations I gave at this event will be on the website shortly.) 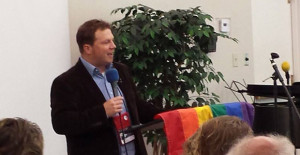 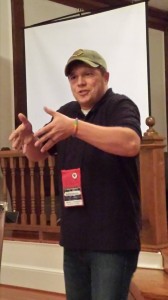