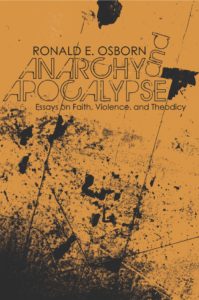 In this wide-ranging collection of essays Ronald E. Osborn explores the politically subversive and nonviolent anarchist dimensions of Christian discipleship in response to dilemmas of power, suffering and war.  Essays engage texts and thinkers from Homer’s Iliad, the Hebrew Bible, and the New Testament to portraits of Dietrich Bonhoeffer, Noam Chomsky, William Lloyd Garrison, Reinhold Niebuhr, and Elie Wiesel.  This book also analyzes the Allied bombing of civilians in World War II, the peculiar contribution of the Seventh-day Adventist apocalyptic imagination to Christian social ethics, President Obama’s Nobel Prize acceptance speech, and the role of deceptive language in the Vietnam War.  From these and diverse angles, Osborn builds the case for a more prophetic witness in the face of the violence of the “principalities and powers” in the modern world.  This book will serve as an indispensible primer in the political theology of the Adventist tradition, as well as a significant contribution to radical Christian thought and Christian anarchism in biblical, historical, and literary perspectives.

“This book is a bracing read for anyone trying to make sense of Christian witness in a violent world. Osborn ranges both widely and deeply, connecting insights from theology, history, literature, and political science in startling and inventive ways. He shows how violence creates its own momentum, and offers a wide range of resources for countering that momentum. Anyone interested in living creatively in a destructive world will benefit from this book. It is the kind of book that has the power to transform lives.” (William T. Cavanaugh, author of The Myth of Religious Violence)

“Rich in subject matter and argument.  There is a stringency in Osborn’s thinking that is prophetic and liberating.” (Patrick Jordan, Commonweal Magazine)

“This collection of provocative essays on theological and political ethics, with special attention paid to pacifism, warfare, and violence, crackles with energy.  Osborn offers a trenchant critique of the industrial-military complex in the USA. What his dialogue partners have in common is the simple truth that war is madness. Once the logic of warfare is unleashed, perhaps even for good reasons, it breaks the bounds of all attempts to curtail, channel, and control it, a fact that calls into question even the noble tradition of ‘Just War.'” (Religious Studies Review)

“Osborn’s powerful and moving essays lay out profound social and political consequences of following Jesus, especially the Christian calling to be peacemakers.  His writing has the clarity and vision of an Old Testament prophet like Amos, or contemporary prophets like Jacques Ellul and Bob Ekblad.” (Kurt Armstrong, author of Why Love Will Always Be a Poor Investment)

“In reading Osborn you cannot help but think, ‘He has to be kidding. He has to be putting us on to suggest there is a connection between anarchy and that form of Christianity called Adventist.’ But he is not kidding. Rather he has written a book of lively essays to remind us that a commitment to peace is a challenge to any order based on violence…that peace requires a different kind of order altogether.” (Stanley Hauerwas, author of War and the American Difference)