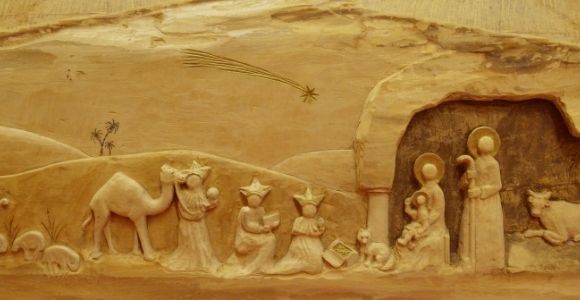 “This Christmas story, far from being about how Jesus would make a way to the afterlife and leave the oppressive systems and structures of this world passively untouched, speaks to its audience of liberation from soul-crushing realities affecting its listeners in the here and now . . . This year, as many of us are facing our own harsh realities, there may have never been a more appropriate time to consider the concrete liberation in the birth narratives of the Advent season: they were written for people who were facing harsh realities.”

“This is how the birth of Jesus the anointed came about.” (Matthew 1.18)

Over the next few weeks, we’ll look at the birth narratives of Jesus from 1st Century perspectives. In their cultural context, both Matthew’s and Luke’s birth narratives are about concrete liberation for oppressed Jewish people in the here and now. Matthew and Luke differ greatly on the details of the birth of Jesus but both speak of concrete liberation. We will read each story in the religious and political contexts they were written in. They intensely subvert the political theologies of their day.

Today, we have access to information that helps us rediscover the stories’ meaning to the first-century followers of Jesus and also to us today as well.

Something to note before we begin: these narratives are primarily concerned with this world, not with heaven. They are focused on liberation in this life, much like the Exodus liberation narratives of the Torah are. Too often, the birth narratives of Jesus are read through the lens of salvation defined as an entrance into post-mortem heaven. But that is not how the original Jewish Jesus community would have heard these stories.

That community was concerned with the whole of life, not merely with an afterlife. A spiritual, afterlife application of these narratives became the dominant interpretation through the cultural influence of the Christianizing and expanding Roman Empire. Reading the gospel narratives with an otherworldly focus has born an intensely destructive fruit ever since then. Before imperial Christianity, people understood these narratives to be about the liberation and transformation of our communities and this world. They were not solely religious stories; they were also political, economic, and social, with distributively just imaginings of an end of violence, injustice, and oppression.

If we are going to wrest these two narratives from centuries of purely religious and otherworldly interpretations, we must discover their historical context. Once we see that context, we cannot unsee it. Once we know it, we cannot unknow it. Learning this context for myself has forever changed how I read the birth narratives of Jesus, so I want to share that journey with you.

This week, we’ll begin with Matthew’s narrative. We will consider why Herod is the focus and why the Magi are included. Next time, we will explore Luke’s birth narrative. My hope is the information in this series will enable you to read the birth narratives in Matthew and Luke anew. And I hope that these narratives, seen in their own contexts, will renew your heart and hope, and inspire you as a Jesus follower to more deeply embody their focus on transforming this world.

Though the early Jesus birth narratives were originally intended for 1st Century listeners, I believe they’re also significant for us today. In our era, these narratives are being eclipsed for Christians by consumerism that uses the gift of Jesus to affirm our holiday economic machine.

Richard Horsley describes this in the introduction to The Liberation of Christmas: The Infancy Narratives in Social Context. He writes:

“Indirectly at least, the giving, hence the buying, of gifts is rooted in the paradigms of God’s gift of the Christ-child and the costly gifts of the Magi. The Christmas story has clearly come to have a material significance: it helps to legitimate the festival of retailing and consumption of goods. The Christmas story has thus also become subservient to the contemporary economic ends as well as subjected to modern cultural presuppositions.” (p. ix)

Today the subversive political and economic themes of the Christmas story are lost even to Christians who are most familiar with them. Systemic racism continues to thrive, xenophobia toward immigrants and Muslim Americans flourishes, LGBTQ exclusion is still practiced by a large number of Christian congregations, and, much like the Rome of these birth narratives, the U.S. still seeks, to achieve peace through military violence—all while we adorn our American lawns with nativities of the babe from Bethlehem.

If we are to rediscover the original subversive power of the birth narratives of Jesus and rightly apply those stories to our lives today, we must read them in the context of the lives and hopes of people in 1st Century Galilee and Judea who daily faced dehumanizing and economically crushing oppression.

Matthew’s ‘King of the Jews’ uses a title reserved for Herod the Great. And Luke’s “Son of God”, Savior of the world, the One who brings peace on earth also uses titles and accomplishments normally applied to Caesar alone. We’ll explore what difference the reassigning of these titles to Jesus made for the oppressed communities of early Jesus followers throughout this series.

For now, the Gospel of Rome promised peace through terror and violence. The Gospels envisioned peace on the other hand through an establishment of distributive justice for all.

The historian Josephus wrote about the ceremonial celebration at which the Roman Senate made Herod the client king of the Jewish region. He said:

“The meeting was dissolved and Antony and Caesar (Augustus) left the senate-house with Herod between them, preceded by the consuls and the other officials, as they went to offer sacrifice and to lay up the decree in the Capitol. On this, the first day of his reign, Herod was given a banquet by Antony.” (War 1.285)

Herod would later economically crush the Jewish common people, piling on the already oppressive Roman tax burden of the inhabitants of the area under his control and threatening violent redress by a large and heavily armed militia. Not only was the Jerusalem Temple-state responsible for collecting the temple tax and the tribute due to Rome, but Herod would also extract heavy tributes for an extensive building project aimed at paying homage to Caesar and thus securing his position within the Roman empire. Herod was intensely efficient at crushing uprisings and rebellions against his oppressive policies, and his slaughter of the people in villages and towns was extensive at certain times. This was a time when life in this region under Herod looked most hopeless. It was a time characterized by exploitation and tyranny for the Jewish peasantry: Herod was economically bleeding his people and country dry.

Josephus again writes that, at one point, Herod’s economic tributes became so heavy that, Herod had to remit “to the people of his kingdom a third part of their taxes, under the pretext of letting them recover from a period of lack crops” (Antiquities 15.365). Because Herod himself was involved in projects whose expenses were greater than his means, “he was compelled to be harsh toward his subjects, for the great number of things on which he spent money as gifts to some, caused him to be the source of harm to those from whom he took his revenues.” (Antiquities 16.154)

The situation for many under Herod’s reign that the peasantry cried out day and night for relief from Herod’s tyranny. Herod had reduced the entire people to helpless and hopeless poverty. Herod had become a conduit for the transfer of the economic lifeblood of Jewish people to other peoples and thus deeply harmed the towns in his own realm as people, once of means, daily passed into poverty.

This is the concrete political, economic, and real-life situation Matthew’s birth narrative centers as it tells the story of a threat to Herod’s reign. This Christmas story, far from being about how Jesus would make a way to the afterlife and leave the oppressive systems and structures of this world passively untouched, speaks to its audience of liberation from soul-crushing realities affecting its listeners in the here and now.

We’ll take a deeper look at Matthew’s version of the story of the birth of Jesus next time.

What economically life-crushing realities are impacting you this week?

How has the COVID pandemic impacted your life? How has the government downplaying it, some leaders’ apparent choice to choose the do-nothing, mass-murder-policy of natural herd immunity, the U.S. Senate’s choice to recess early before the Thanksgiving holiday instead of passing on much-needed relief—how have these and more failed approaches to the pandemic impacted you?

This year, as many of us are facing our own harsh realities, there may have never been a more appropriate time to consider the concrete liberation in the birth narratives of the Advent season: they were written for people who were facing harsh and crushing realities themselves and found hope in the person and teachings of Jesus.

What do its stories have to share with us today?

2. In what ways do you see the Advent narratives being much more concerned with our concrete lives, here and now, rather than being otherworld or afterlife focused?