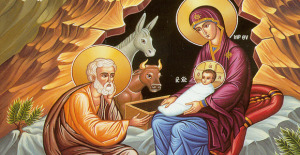 He has brought down the powerful from their thrones, and lifted up the lowly; he has filled the hungry with good things, and sent the rich away empty. He has helped his servant Israel, in remembrance of his mercy, according to the promise he made to our ancestors, to Abraham and to his descendants forever. – Mary; Luke 1.52–55

The Jesus narrative, with all its challenges to us today, is proclaiming that this new world has actually begun. I’m also well aware that when the Roman Empire coopted the Jesus movement in the fourth century, in what many scholars call “the Constantinian shift,” what the Jesus narrative says to those who are oppressed became eclipsed and largely lost as the church (those by whom the Jesus narrative was taught) would eventually become the Empire itself and almost irredeemably attach the name of Jesus to one of the most oppressive structures in the history of the Western world. Even with the protestant reformation, “Christianity” today continues to be one of the most oppressive voices in the West regarding issues of race, gender, sexuality, and economics. How has that which claimed the Jesus of the Jesus narrative to be its central object of reverence veered so far from what that Jesus taught in regards to liberation?

From all the pictures of God within the Jewish scriptures that this Jesus could have chosen to characterize his movement, he chose an advocate God who liberates the oppressed.

“The Spirit of the Lord is upon me, because he has anointed me to bring good news to the poor. He has sent me to proclaim release to the captives and recovery of sight to the blind, to let the oppressed go free, to proclaim the year of the Lord’s favor.” (Luke 4.18–19, emphasis added.)

When John’s disciples came asking Jesus if he was really the one they had been looking for, this Jesus offers his work of liberation for those socially oppressed as the conclusive evidence.

He answered them, “Go and tell John what you have seen and heard: the blind receive their sight, the lame walk, the lepers are cleansed, the deaf hear, the dead are raised, the poor have good news brought to them” (Luke 7.22).

Notwithstanding all of the challenges that the narrative of Jesus’ birth produces for us today, we can trace this picture of an advocate God of liberation all the way back to the words of Jesus’ mother Mary.

“He has brought down the powerful from their thrones, and lifted up the lowly; he has filled the hungry with good things, and sent the rich away empty. He has helped his servant Israel, in remembrance of his mercy, according to the promise he made to our ancestors, to Abraham and to his descendants forever” (Luke 1.52–54).

He has brought down the powerful from their thrones, and lifted up the lowly

Mary first portrays the work of her son to be subversive to monarchy. Her son’s work would decenter a world that functions hierarchically where humans “reign” over other humans. We can see this in Jesus’ words to his disciples in Luke 22. “He said to them, “The kings of the Gentiles lord it over them; and those in authority over them are called benefactors. But not so with you; rather the greatest among you must become like the youngest, and the leader like one who serves. For who is greater, the one who is at the table or the one who serves? Is it not the one at the table? But I am among you as one who serves.” Jesus came announcing the possibility of a world that does not depend upon hierarchical structures for it to function. Hierarchy rules coercively; love inspires compellingly. Jesus came with the message that we can live together without being “ruled.” Jesus cast a vision of a world inspired by the beauty of egalitarian love (Matthew 23.8) where each person treats every other simply the way one would like to be treated (John 13.35; Matthew 7.12).

It might be said that today, at least here in America, we no longer practice monarchy but democracy. Nevertheless, even within democracy, hierarchy is still practiced. Privilege and advantage cause those of a different race, gender, orientation, or economic status to be “ruled over” by laws and policies written by white, wealthy, straight, cisgender males like myself. What does it mean, within a democracy, for the “powerful” to be pulled down “from their thrones?” Those who wear the name of this Jesus should not be supporting the status quo, but subverting it, pioneering a new way of “doing life,” calling those at “the top” of a nation founded on privilege to follow this “dethroning” Jesus as well. It is my belief that there is no better place for this to begin than within Ecclesiastical structures themselves. Until religious hierarchy ceases to be practiced and protected by those who say they are following Jesus, the church is betraying itself. Until those who claim the name of Jesus begin themselves to follow this “dethroning” Jesus, we cannot even begin to dream of (much less pioneer) a world that is truly different. New hierarchical structures will simply replace old ones. The names of the streets will be changed, yet the same old ways of mapping those streets will remain the same.

He has filled the hungry with good things, and sent the rich away empty.

It would be well to remember the words of Jesus in Luke’s version of the Jesus narrative in Luke 6.20–26:

Yes, Jesus came announcing good news to the disadvantaged, but it was not perceived to be good news by all. There were the few at the top of the political, economic, and ecclesiastical structures who viewed Jesus’ “good news” as a threat to be swiftly dealt with (see Mark 11.18 cf. John 11.47–50).

As Peter Gomes in his book The Scandalous Gospel of Jesus writes, “Good news to some will almost inevitably be bad news to others. In order that the gospel in the New Testament might be made as palatable as possible to as many people as possible, its rough edges have been shorn off and the radical edge of Jesus’ preaching has been replaced by a respectable middle, of which ‘niceness’ is now God. When Jesus came preaching, it was to proclaim the end of things as they are and the breaking in of things that are to be: the status quo is not to be criticized; it is to be destroyed.”

“When the gospel says, ‘The last will be first, and the first will be last,’ despite the fact that it is counterintuitive to our cultural presuppositions, it is invariably good news to those who are last, and at least problematic news to those who see themselves as first” (Ibid.).

Today wealth and prosperity is taken as evidence of God’s blessing. Jesus did not teach this. Jesus taught that wealth and prosperity reveal an inequality in foundational structures that left some hungry while others were well fed. This new world pioneered by this Jesus was a world where “the hungry would be filled with good things,” and the stockpile reserves of the “rich would be sent away empty.”

He has helped his servant Israel, in remembrance of his mercy, according to the promise he made to our ancestors, to Abraham and to his descendants forever.

The great hope of the Hebrew people was not to die and go to heaven, but that some day, on earth, all oppression, violence, and injustice would be put right. This hope was held to be precious by a people whose history was one of being the sweatshop workers of Egypt, then the conquered natives of the Babylonian Empire, and presently the victims of Roman colonization.

What Mary is announcing is that her son would be the liberator of her people from the oppressive presence of the then present Superpower of the known world. What Mary as well as many of the others within the Jesus narrative do not perceive is that this Jesus, whenever followed, would be the liberator of all who are oppressed in every generation. One needs only think of Gandhi and Dr. Martin Luther King, Jr. for the evidence of this being true. What I find most ironic is that Gandhi, in being inspired to follow the teachings of Jesus in the “sermon on the mount,” found liberation from British Christians. And King, by doing the same, found liberation from white Christians in positions of privilege here in America.

What does this mean to us this Advent season?

Change doesn’t have to be scary. For those at the top, following Jesus will change everything. But the beauty of the world promised by the Jesus narrative, I choose to believe, is possible. And it’s the beauty of this new world that wins me, at a heart level, to allow my present world to be “turned upside down” (see Acts 17.6).

Will it be costly? Of course it will be. But it’s worth it.

“The kingdom of heaven [this new world] is like treasure hidden in a field, which someone found and hid; then in his joy he goes and sells all that he has and buys that field” (Matthew 13.44).

1. As we begin this Advent season, let’s spend some time sitting with the living Jesus allowing him to open our eyes. As Rabbi Tarfon so eloquently stated, “Do not be daunted by the enormity of the world’s grief. Do justly, now. Love mercy, now. Walk humbly, now. You are not obligated to complete the work, but neither are you free to abandon it.”

2. As you contemplate the injustice of the present world as contrasted with the justice of the new world promised by the Jesus narrative (see Matthew 6.33), journal what Jesus inspires you with.

3. Share with your upcoming HeartGroup in what areas of the world around us that Jesus has inspired you to want to make a difference.

Until the only world that remains, is a world where love reigns, may this Advent season mark a furthering and deepening of the world that babe in Bethlehem came to found.

Together we can ensure a better world is yet to come.

I love each of you, and remember the advocating, liberating God we see in Jesus does too.