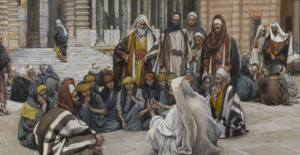 Jesus said to them, “Have you never read in the scriptures: ‘The stone that the builders rejected has become the cornerstone; this was the Lord’s doing, and it is amazing in our eyes’?” (Matthew 21.42)

First, I want to say a big thank you to all who have been praying for my recovery over the last three weeks. I’m back on my feet now after a pretty tough bout of pneumonia. Thanks for your love, support, prayers, and patience. I really appreciate your concern.

Matthew 21 presents a series of parables that Jesus was sharing with the chief priests and Pharisees on the subject of their religious rejection of others to whom they felt morally superior.

“What do you think? A man had two sons; he went to the first and said, ‘Son, go and work in the vineyard today.’ He answered, ‘I will not’; but later he changed his mind and went. The father went to the second and said the same; and he answered, ‘I will go, sir’; but he did not go. Which of the two did the will of his father?” They said, “The first.” Jesus said to them, “Truly I tell you, the tax collectors and the prostitutes are going into the kingdom of God ahead of you. For John came to you in the way of justice and you did not believe him, but the tax collectors and the prostitutes believed him; and even after you saw it, you did not change your minds and believe him. (Matthew 21.28–32, emphasis added)

There are three points to keep in mind as we read these parables that will enable us to step into their context and receive their full impact.

“Listen to another parable. There was a landowner who planted a vineyard, put a fence around it, dug a wine press in it, and built a watchtower. Then he leased it to tenants and went to another country. When the harvest time had come, he sent his slaves to the tenants to collect his produce. But the tenants seized his slaves and beat one, killed another, and stoned another. Again he sent other slaves, more than the first; and they treated them in the same way. Finally he sent his son to them, saying, ‘They will respect my son.’ But when the tenants saw the son, they said to themselves, ‘This is the heir; come, let us kill him and get his inheritance.’ So they seized him, threw him out of the vineyard, and killed him. Now when the owner of the vineyard comes, what will he do to those tenants?”

They said to him, “He will put those wretches to a miserable death, and lease the vineyard to other tenants who will give him the produce at the harvest time.” Jesus said to them, “Have you never read in the scriptures: ‘The stone that the builders rejected has become the cornerstone; this was the Lord’s doing, and it is amazing in our eyes’? Therefore I tell you, the kingdom of God will be taken away from you and given to a people that produces the fruits of the kingdom. The one who stumbles over this stone will be broken to pieces; and it will crush anyone on whom it falls.” (Matthew 21.33–46, emphasis added)

I want to draw your attention to the phrase, “The stone that the builders rejected has become the cornerstone.” This is nothing unique, and certainly nothing new. From the founding of human society, societies have always been built on the rejection of, or scapegoating of, a single victim. Human societies find unity and cohesiveness in joining together against a common “enemy.” This enemy is accused of being responsible for societies stresses and conflicts. It’s the age old, “Us versus Them!” The rejection of a “stone” has always been the “cornerstone” of forming societies. Yet in a very real sense, there is something different about this time. In all the stories of history, legends, and myths, deities are always on the side of those who are doing the rejecting—the rejectors. In fact, the gods are the ones demanding that the victim be sacrificed/rejected! Yet in the Jesus story, the scapegoating mechanism is turned on its head. God, for the first time in all the stories, is in the One being rejected, showing the victims to innocent, over and against those who are endeavoring to found (or in this case preserve) a society on sacrificing, rejecting, a victim. (See Caiaphas’ statement in John 11.50)

In short, according to Jesus, the rejectors were about to be rejected. And this is a first! God, in Jesus, for the first time, is revealed as rejecting their rejection of the rejectors. Those who had been rejected were being taken up by God, shown to be being victimized and objectified, and then used by this same God to pioneer a new way of living life on planet Earth. This new way of doing life will be rooted in equality, justice, restoration, reconciliation, mercy and love. Jesus referred to this new way of orchestrating the world as the Kingdom. For those who were offended by this divine rejection of their rejection, those who endeavored to go against this “amazing,” unique, and original “doing of God,” would find themselves “broken to pieces and crushed.” As some have said, the grain of the universe is love and those who go against this grain receive within themselves the splinters of such a course.

The vineyard was in the process of being taken away from those who had abused and oppressed others through it—those who had chosen to go against the grain of love. Ironically, as those who had been abused and oppressed were actually responding to Jesus and aligning themselves “with the grain” (in a way unrecognizable to the chief priests and Pharisees), the vineyard was now being given to them because they could be entrusted with producing the right kind of fruit.

What does this mean for us today?

The good news is that it doesn’t matter to God why you have been rejected. You are precious to the God we see in Jesus. To this God, the rejection you have experienced has been divinely discarded itself. It doesn’t matter whether your rejection has been social, political, economic, or religious. You’re the last people on the planet to turn others away because you know how it feels to be abandoned. If you would like to follow Jesus into this new world, remember, He was the original “reject!” This rejected Jesus, “scapegoated” by the religious of His own day, has founded a new world, one that operates very differently, yes, but also founded with “rejects.”

You—come to Him, a living stone, though REJECTED by mortals yet CHOSEN and PRECIOUS in God’s sight, and like living stones [also rejected by others but chosen by God and precious in His sight], let yourselves be built into a spiritual house, be a holy priesthood, and offer spiritual sacrifices acceptable to God through Jesus Christ. (1 Peter 2.4–5)

“The stone that the builders rejected has become the cornerstone.”—Jesus

“The kingdom of God will be taken away from you [the rejectors] and given to the people [the rejected] who produce the fruits of the kingdom.”—Jesus

If you have been rejected, in Jesus, God has rejected your rejection. You are precious to the God we find in Jesus and by this God, you are chosen.

To all the rejects, myself included, Jesus is saying the same thing that we find Him saying over and over again in the four gospels—“Follow Me.”

Matthew ends this series of parables with the statement:

When the chief priests and the Pharisees heard his parables, they realized that he was speaking about them. They wanted to arrest him, but they feared the crowds, because they regarded him as a prophet. (Matthew 21.45–46)

This was the ultimate rejection of Jesus that would lead to His unjust crucifixion by them.

I receive so many emails with such sad stories of how precious people, made in the image of God, have been rejected, especially by their religious communities. There are many ways in which individuals can be disregarded, not just religiously, but these seem to be the ones I hear from the most. To each of you, remember, Jesus was the original reject. You’re in good company. As a matter of fact, if you have ever felt unwanted by others for whatever reason, you are part of a precious group that Jesus called His tribe.

Wherever this message finds you this week, remember, I love you and God does, too. Keep living in love and loving like Jesus, till the only world that remains is the one where Christ’s love reigns. Now go and enlarge the Kingdom.

I’ll see you next week,
Herb