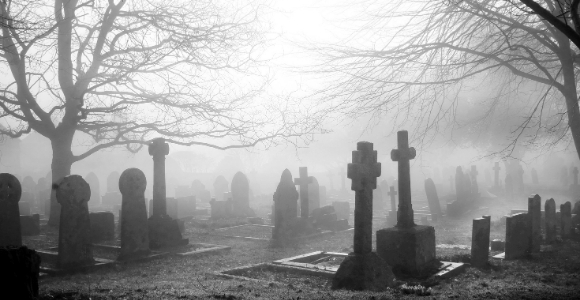 In Mark’s gospel we read a story that many people find difficult:

“[Jesus and his disciples] went across the lake to the region of the Gerasenes. When Jesus got out of the boat, a man with an evil spirit came from the tombs to meet him. This man lived in the tombs, and no one could bind him anymore, not even with a chain. For he had often been chained hand and foot, but he tore the chains apart and broke the irons on his feet. No one was strong enough to subdue him. Night and day among the tombs and in the hills, he would cry out and cut himself with stones. When he saw Jesus from a distance, he ran and fell on his knees in front of Him. He shouted at the top of his voice, “What do you want with me, Jesus, Son of the Most High God? In God’s name, don’t torture me!” For Jesus had said to him, “Come out of this man, you evil spirit!” Then Jesus asked him, “What is your name?” “My name is Legion,” he replied, “for we are many.” (Mark 5:1-9)

The original audience of Mark’s gospel would have recognized the symbols and codes in this story. We are removed by time and context, and so it’s harder to follow.

I believe this story is a symbolic portrait of Roman imperialism. Ched Myers notes in his commentary on Mark’s gospel that this story is a story of “symbolic confrontation” and has specific political meaning. The name of the man, Legion, was the name of a division of Roman soldiers.

“The conclusion is irresistible that we are here encountering imagery meant to call to mind the Roman military occupation of Palestine,” Myers writes in Binding the Strong Man (p. 191). This occupation was destroying the spirit, independence, and will of the people Rome colonized, and this story depicts what we refer to today as a person’s internalized oppression.

As soon as Jesus arrives in this story, he is met with immediate resistance. This ancient exorcism story is full of symbolic action: oppression by foreign rule appears as occupation by a foreign “spirit.” The man Jesus meets, whom no one could bind, cut himself with stones. Self-cutting in this context is a form of auto-lapidation. Lapidating is the act of pelting or killing someone with stones until they die, and the gospels typically attribute this activity to a crowd stoning someone (Matthew 21:35; 23:37; Luke 20:6; John 8:7, 59, 10:31–33, 1:8) Why would this man do this to himself?

In the gospels, it is always the many, the majority, the privileged crowd that engages in this form of capital punishment, but this man has internalized this kind of violence toward himself. So this is a story where societal oppression leads someone to believe their oppressors’ valuation of themselves, and that leads to self-hatred and self-destruction.

Social violence becomes collective as members choose someone they can come together against. They find unity in agreeing on who they are against. Victims of this violence can adopt their society’s estimation of themselves. In our context this can take many forms:

Women internalize the patriarchy, going along to get along,

The poor and/or working-class people champion the cause of exploitative capitalists,

Jesus arrives in the story as someone outside of this man’s community coming to set him free from his own self-hatred.

The story doesn’t end with this man’s isolated experience, though.

“[Legion] begged Jesus again and again not to send them out of the area. A large herd of pigs was feeding on the nearby hillside. The demons begged Jesus, ‘Send us among the pigs; allow us to go into them.’ He gave them permission, and the evil spirits came out and went into the pigs. The herd, about two thousand in number, rushed down the steep bank into the lake and was drowned. Those tending the pigs ran off and reported this in the town and countryside, and the people went out to see what had happened. When they came to Jesus, they saw the man who had been possessed by the legion of demons, sitting there, dressed and in his right mind; and they were afraid. Those who had seen it told the people what had happened to the demon-possessed man—and told about the pigs as well. Then the people began to plead with Jesus to leave their region.” (Mark 5:10-17; Emphasis added)

In this Hellenized, mostly Greek region (Gentile with very few Jews), pigs were a farming commodity. Here the author zooms in to focus on the economic dimension of Jesus’ politics. If the larger community embraces this man’s liberation from internalized oppression, what will this mean for them? If they honestly estimate the Roman occupation, that will change everything, including their economic structure. Economic change is emotionally unsettling even when it’s more distributively just: it’s challenging what some people need for survival on one hand, and what others have hoarded for security and anxiety management on the other hand.

Jesus began by restoring the man, but the story quickly redirects us to the man’s surrounding society. His liberation of the man from internalized oppression threatens the unity and peace that the privileged of society had found in Roman occupation. Jesus turns their way of life, their stability, on its head and forces them to see the man as a fellow human being, like themselves. Jesus un-objectifies the man, de-dehumanizes him, un-degrades him. Jesus lifts this man up and returns him to a place of belonging in the humanity in the sight of a society that had found unity and coherence by purging him to the tombs. Jesus challenges the entire arrangement of this society.

The story doesn’t end well. The people choose economic and political security over the liberation Jesus pointed to. They cry, “Don’t bite the hand that feeds us.” Jesus and his liberation is not welcome with them.

Just this week I had a discussion with a neighbor of mine who was expressing their views about the upcoming election. He admitted that the present administration had economically benefited him and his business. At last, though, he said that even that economic benefit was not enough for him. He felt he also had to consider the thousands upon thousands whom the administration had harmed. He was choosing harm-mitigation and planned to vote for change come November. My neighbor made the opposite decision to the privileged in Mark’s story.

Seeing the man set free from his internalized oppression, the society around him refuses to get free of the same “demons.” Until then, this man had become infected with the bigotry of his own society toward himself.  He had allowed how his society defined him to become the way he defined himself as well. When people get free of collective violence toward a marginalized sector of our society, (whether in themselves toward themselves, or within themselves toward others) they are following the social truth within this gospel story.

This is my story, too. I am a member of the kind of scapegoating society this man lived in. But I have also seen the humanity of the ones I once marginalized, and it has turned my world upside down. I wish I could claim some credit for this transformation, but I did not go looking for it. Once it was laid at my doorstep, though, I did have to make a choice.

Today, I simply want to bring others with me. Has it brought me some economic uncertainty? You bet. The ministry I direct has gone through huge economic shifts as our support base has changed. I hope it will continue to recover. Too often, economic reasons drive us to reject positive changes and this story is a cautionary tale for just such moments.

What would happen if we saw those people we have placed on society’s altars as having just as much value, worth, and right to be included as we have? Though we are living with a very different worldview today than those for whom this story was written, our society, political, economic, and even religious bigotries are no different than those in this gospel story.

This story calls us today to once again see those whom we have labeled as different or other as human, bearing the image of the Divine just as we do. Jesus calls us to embrace the reality that they are our siblings, we are part of the same human family, and they deserve a place at the table, too.

2. Share an experience with your group of how you broke free from your own internalized dehumanization from how other’s viewed you, or where you chose to reject your own dehumanization of others.