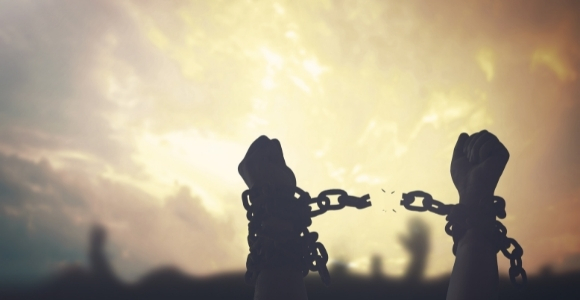 “These types of systems are to be eliminated, not reformed. We must not merely seek the lowest positions within hierarchical systems of domination and oppression, we are to reject those systems in their entirety. We need neither lords nor slaves. It’s time to leave both categories behind. What would our world look like with neither slaves or servants nor lords? What would it look like if we instead made commitments of mutual care for one another rather than to  more effectively or efficiently dominate each other?”

Then James and John, the sons of Zebedee, came to him. “Teacher,” they said, “we want you to do for us whatever we ask.” “What do you want me to do for you?” he asked. They replied, “Let one of us sit at your right and the other at your left in your glory.” “You don’t know what you are asking,” Jesus said. “Can you drink the cup I drink or be baptized with the baptism I am baptized with?” “We can,” they answered. Jesus said to them, “You will drink the cup I drink and be baptized with the baptism I am baptized with, but to sit at my right or left is not for me to grant. These places belong to those for whom they have been prepared.” When the ten heard about this, they became indignant with James and John. Jesus called them together and said, “You know that those who are regarded as rulers of the Gentiles lord it over them, and their high officials exercise authority over them. Not so with you. Instead, whoever wants to become great among you must be your servant, and whoever wants to be first must be slave of all. For even the Son of Man did not come to be served, but to serve, and to give his life as a ransom for many.” (Mark 10:35-45)

In this week’s narrative, two of Jesus disciples ask for precedence above the other disciples. In modern political terms, and given what they understand the reign of God to allow for, they are asking for the equivalent of the first and second cabinet positions. But before we fault them too harshly for this, they had good reasons from their sacred text for assuming what God’s just future might look like.

In the Psalms we read:

“The LORD says to my lord: ‘Sit at my right hand until I make your enemies a footstool for your feet.’ The LORD will extend your mighty scepter from Zion, saying, ‘Rule in the midst of your enemies!’” (Psalms 110:1,2)

Both Matthew’s and Luke’s Jesus repeat this kind of language:

“Jesus said to them, “Truly I tell you, at the renewal of all things, when the Son of Man sits on his glorious throne, you who have followed me will also sit on twelve thrones, judging the twelve tribes of Israel. (Matthew 19:28)

“So that you may eat and drink at my table in my kingdom and sit on thrones, judging the twelve tribes of Israel.” (Luke 22:30)

In this week’s story in Mark, Jesus replies that they are clueless as to what they are asking for and then asks them, “Can you drink the cup I drink or be baptized with the baptism I am baptized with?”

I appreciate that in this passage, Jesus looks at his future cross (“the cup”; see Mark 14:36) as participatory for his followers, just as his baptism was. Jesus had been baptized by John, who ended up beheaded by the powers for his refusal to be silent. Jesus’ options for his followers, cup or cross, are similar to John’s options.

James and John were asking for what belonged to those who choose to follow the path of resistance. But the cross for Jesus is not substitutionary or a redemptive sacrifice. It is the price of resisting a system that seeks to silence resistance to its abuses. It calls us not to be passive in response to injustice, even when resistance will bring consequences. (See Taking Up Our Crosses, Injustice, and Abuse; Those Things Which Are Eternal; and Speaking Truth to Those in Power)

Remember that Mark’s narrative was written after Herod had executed James, the first of the two brothers: “It was about this time that King Herod arrested some who belonged to the church, intending to persecute them. He had James, the brother of John, put to death with the sword.” (Acts 12.1-2)

In the story, though, the other disciples respond in anger. We are left to assume that they are not angry because the brothers failed to understand the egalitarian nature of Jesus’ vision for human communities, but because these two disciples outflanked the others in their mutual competition to be first. They all failed to understand Jesus’ lesson of the first becoming last and the last becoming first (Mark 9:35). Jesus does not repeat the teaching in Mark 10:

“You know that those who are regarded as rulers of the Gentiles lord it over them, and their high officials exercise authority over them. Not so with you. Instead, whoever wants to become great among you must be your servant, and whoever wants to be first must be slave of all.”

The reign of God is to be of a different order than the disciples assume. I will push back against this in a moment, but for now, the disciples are to aspire not to be “lords” but “slaves.”

“To the elders among you, I appeal as a fellow elder and a witness of Christ’s sufferings who also will share in the glory to be revealed: Be shepherds of God’s flock that is under your care, watching over them—not because you must, but because you are willing, as God wants you to be; not pursuing dishonest gain, but eager to serve; not lording it over those entrusted to you, but being examples to the flock. And when the Chief Shepherd appears, you will receive the crown of glory that will never fade away.” (1Peter 5:1-4)

I appreciate the emphasis on not encouraging lordship, and we must also be honest that our sacred texts and narratives do endorse slavery and its hierarchy.

Jesus challenges political patriarchy and familial patriarchy (these forms are connected) from the beginning of Mark to the end. From the male disciples’ repeated blinkered leadership failures to the ways women disciples practice the vocation of service, Mark shows yet another illustration of those who are last being honored as first while those first made to be last. Some scholars now question whether the gospel of Mark could have been written by women within the early male-dominated Jesus community.

While I find that idea intriguing, today we must be clear that any effort to merely reform a system that includes slaves and lords rather than eliminating these kinds of relationships is not good enough. These types of systems are to be eliminated, not reformed. We must not merely seek the lowest positions within hierarchical systems of domination and oppression, we are to reject those systems in their entirety.

We need neither lords nor slaves. It’s time to leave both categories behind.

What would our world look like with neither slaves or servants nor lords? What would it look like if we instead made commitments of mutual care for one another rather than to  more effectively or efficiently dominate each other? At the heart of that kind of world would be respect for the dignity of every human being and understanding that we are a connected part of one another. As Valarie Kaur states, “You are a part of me I do not yet know” (in See No Stranger: A Memoir and Manifesto of Revolutionary Love, p. 4). It would be a world where we chose social, political, and economic systems rooted in the ethic of loving our neighbors as a part of or as connected to ourselves (Mark 12:31).

Mark puts these words in the mouth of Jesus: “ For even the Son of Man did not come to be served, but to serve, and to give his life as a ransom for many.” Here the early Jesus movement is wrestling with efforts to redeem some meaning from Jesus’ execution. As I’ve stated before, this is one explanation in the gospels. I find a more compelling and life-giving narrative than the language of redemptive suffering and sacrifice in the parts of the gospel narratives and the book of Acts that focus on God overcoming, reversing, undoing, and triumphing over Jesus’ unjust execution through the resurrection event (see Reinterpreting the Easter Story and Imagery of a Good Shepherd). Death is not overcome in these narratives through more death. Death and death-dealing is overcome through the greater power of life—resurrection life. Everything the state accomplished by executing Jesus was undone through the resurrection.

Our goal today is not to passively give ourselves as ransoms for death, but to become channels of death-overcoming life as we relate to one another as individuals and shape social, political, and economic structures as we share space with each other here in our world. For if we take seriously Jesus’ call for no more lords, and we work for a world where there are no more, we will by that same effort create a world with no more slaves as well.

This week’s narrative is call to both imagine and work toward a different world.

2. This week, we have read about being honest regarding our sacred texts rather than a posture of defensiveness and protectiveness.  What are some of the discomforts this level of honesty creates in you, if any? What long term benefit is there in lowering our defensiveness and embracing this kind of honesty? Discuss with your group. 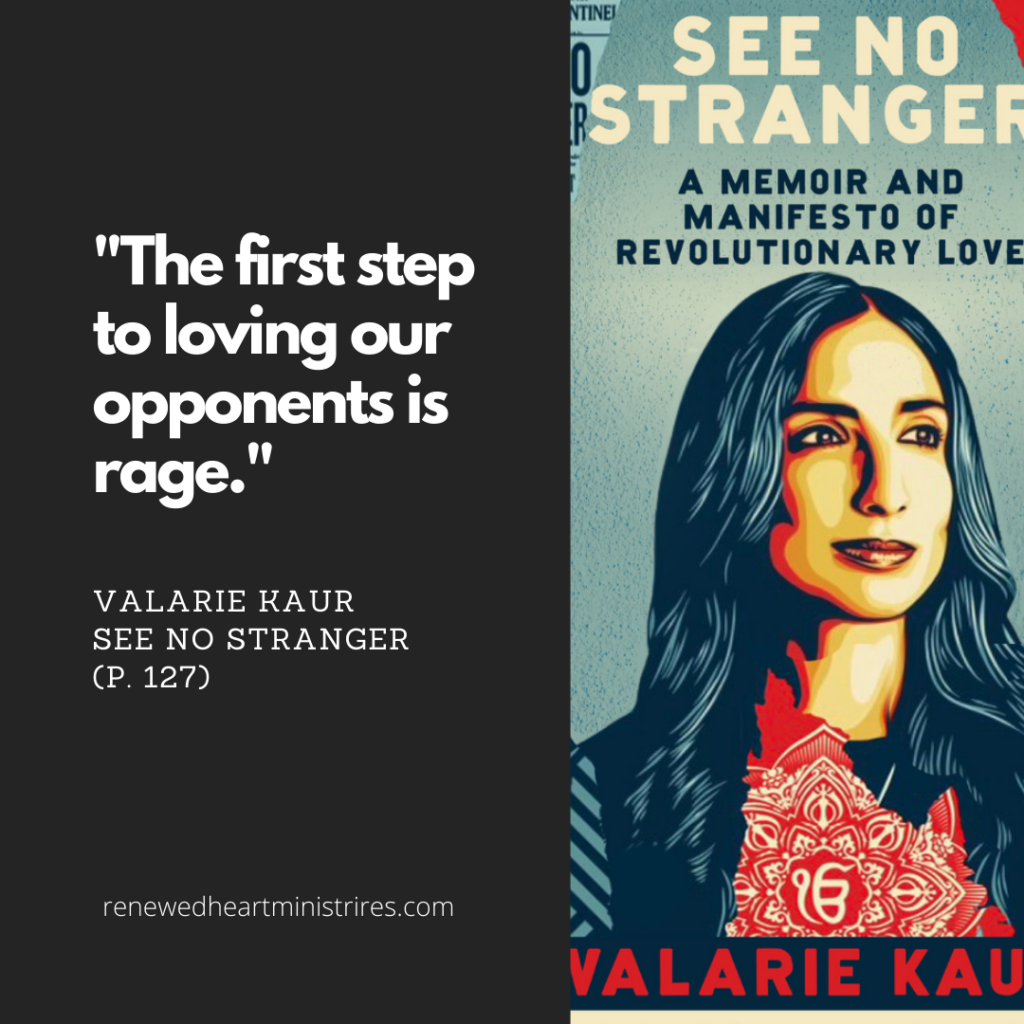