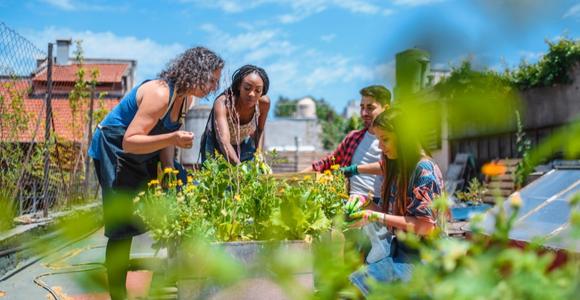 “Those of us from Western cultures have a lot we can learn from cultures that value community wellbeing over or alongside individual thriving. There are ways of structuring our society where the common good is emphasized, where the community thrives alongside each person comprising it, where we collectively take responsibility for taking care of every person.”

Now on his way to Jerusalem, Jesus traveled along the border between Samaria and Galilee. As he was going into a village, ten men who had leprosy met him. They stood at a distance and called out in a loud voice, “Jesus, Master, have pity on us!” When he saw them, he said, “Go, show yourselves to the priests.” And as they went, they were cleansed. One of them, when he saw he was healed, came back, praising God in a loud voice. He threw himself at Jesus’ feet and thanked him—and he was a Samaritan.

Jesus asked, “Were not all ten cleansed? Where are the other nine? Has no one returned to give praise to God except this foreigner?” Then he said to him, “Rise and go; your faith has made you well.” (Luke 17:11-19)

We can glean something from this week’s reading, and we have a few things to unpack first. We are far removed from the cultural setting of our story, but if we give it a moment, wisdom will come to the surface.

First, let’s understand how the Torah approached skin abnormalities. Anyone with a skin problem was to show it to the priest. If the issue was thought questionably contagious and a danger to the community, the person would be isolated for a period and re-examined before regaining access to the community. The result was either re-inclusion or continued isolation.

“If the shiny spot on the skin is white but does not appear to be more than skin deep and the hair in it has not turned white, the priest is to isolate the affected person for seven days. On the seventh day the priest is to examine them, and if he sees that the sore is unchanged and has not spread in the skin, he is to isolate them for another seven days.” Leviticus 13:4-5

Leprosy was an especially harmful skin disease socially. Not only did the person have to deal with the negative effects of the disease itself, they also had no social reinstatement to look forward to. Lepers were sentenced to an isolated life, living away from their community and alone for the rest of your days. Leper communities were invented so that lepers could still have some type of community with whom to survive.

Survival in Jesus’ world depended on belonging to one of many village communities. Belonging to a community comprised of a network of rural families was how you survived. A person would not survive on their own.

Now let’s look at the purpose of the healing stories in the Jesus story.

We could interpret these healing stories through a post-Enlightenment, naturalistic worldview that challenges all miracles as a violation of natural laws. We could question the historicity of each of these stories too. But I find many more life-giving lessons from interpreting the healing stories as Richard Horsley does in his excellent volume Jesus and Empire: The Kingdom of God and the New World Disorder. This approach asks us to take the healing stories, not within our context today, but in the context the original audience would have heard them, given their assumptions. In the four canonical versions of the Jesus story we have today, we must hear each of these stories in the debilitating context of Roman imperialism.

Leprosy broke down a person’s place in their village community, isolating them from a community-based system of survival to an individualistic mode of survival on the edges of their society. They were on their own.

In our individualistic culture, we have the myth of success being the result of pulling up oneself up by one’s own bootstraps. One of the deepest fall-outs of colonialism is the repression of Indigenous community ways, such as  the community coming together to make sure everyone is cared for, and where individual wellbeing was balanced with the common good or the community thriving. Colonialism has left each of us a “leper” today, isolated from community and having to make it on our own. This has been quite convenient for the capitalist elite, who can consolidate more power and wealth if we are only individuals working for our own survival, receiving only a portion of our work’s value, having the majority of our hard work only go to make someone else richer.

Jesus’ ministry was not to start a new religion, but to socially and economically renew his own Jewish society. His ministry involved restoring people to communal life in villages in a context where Roman imperialism was destroying communities, transforming landowners belonging to a small village community into isolated, individual, workers on land they’d once owned but lost through oppressive Roman taxation and defaulted debt.

In these stories, Jesus’ healings represent the restoration of the rule or kingdom of the God of the Torah and the victory of God’s rule over Roman rule. Jesus’ world was one where people were restored from the economic isolation of self-reliance to a community dedicated to making sure everyone had enough (see Acts 2 and 4). The leprosy is a real disease, and it was also used in the Jesus stories as a metaphor for the very real isolating effects of Roman imperialism. Roman rule was a disease that transformed the way people lived with each other.

So Jesus acted to heal and reverse the effects of Roman occupation. He called his listeners to rebuild their community life. And in this week’s story, we see yet another example of people being healed of that which kept them on the margins or edges of their society. His goal was not just to heal people as individuals, but that they also present themselves to their priests so they could be restored to their community.

If this is a new idea to you, I recommend the section “Healing the Effects of Imperialism” in Horsley’s book, Jesus and Empire: The Kingdom of God and the New World Disorder.

“Like the exorcisms, Jesus’ healings were not simply isolated acts of individual mercy, but part of a larger program of social as well as personal healing…

In these and other episodes Jesus is healing the illnesses brought on by Roman imperialism.

He was pointedly dealing with whole communities, not just individuals, in the context of their meeting for self governance. He was not dealing only with what we moderns call ‘religious’ matters, but with the more general political-economic concerns of the village communities as well, as we shall see below.” (Kindle Locations 1391-1392, 1406, and 1440-1442)

“Jesus launched a mission not only to heal the debilitating effects of Roman military violence and economic exploitation, but also to revitalize and rebuild the people’s cultural spirit and communal vitality. In healing various forms of social paralysis, he also released life forces previously turned inward in self blame. In these manifestations of God’s action for the people, and in his offering the kingdom of God to the poor, hungry, and despairing people, Jesus instilled hope in a seemingly hopeless situation. The key to the emergence of a movement from Jesus’ mission, however, was his renewal of covenantal community, calling the people to common cooperative action to arrest the disintegration.” (Richard A. Horsley. Jesus and Empire: The Kingdom of God and the New World Disorder, Kindle Locations 1634-1638)

At the end of this story, the writer states that the only leper who was thankful was a Samaritan. With this point in the narrative, we can see the antisemitism growing in Christianity by this point. So I don’t find this part of the story very life-giving for us. Jewish people had always believed that the restoration of justice and end of oppression and violence was for all people. Bringing up the Samaritans seems like just another Gentile Christian attempt to distance their group from their Jewish siblings and cast those Jewish siblings in a negative light. Had they wanted to extend Jesus’ liberation beyond the borders of Judea and Galilee, the author could have been accomplished this without this plot point, but since it’s in this story, it’s important that we as Jesus followers today be honest about it.

What is the gem of wisdom in this story?

As I briefly stated earlier, we are living in the wake of colonialism’s global destruction of so many indigenous cultures and repression of their communal way of life, including here in the United States. This week’s story calls into question the myth of pulling ourselves up by our bootstraps and calls us to lean into communal ways of living.

Those who have much more wealth to gain from our isolated way of living will try to scare us with labels like “socialism” or “communism.” Pay them no mind. Realize the game that they are playing.

Lean instead into the Jesus story. Those of us from Western cultures have a lot we can learn from cultures that value community wellbeing over or alongside individual thriving. There are ways of structuring our society where the common good is emphasized, where the community thrives alongside each person comprising it, where we collectively take responsibility for taking care of every person. They can call it “socialism.” I disagree because socialism doesn’t go far enough to follow the Jesus we read about in these gospel stories.

2. List some of the ways you see our present system pushing us toward isolated individualism for our survival? Discuss these with your group.

In this topic:
Trading Individualism for Community