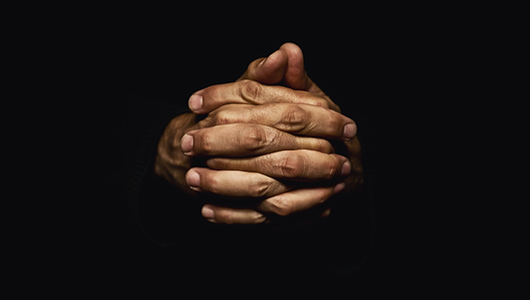 “I tell you, ask and it will be given to you, search and you will find, knock and it will be opened to you. For everyone who asks receives, and the one who searches finds, and to the one who knocks will it be opened. What person of you, whose son asks for bread, will give him a stone? Or again when he asks for a fish, will give him a snake? So if you, though evil, know how to give good gifts to your children, by how much more will the Father from heaven give good things to those who ask him!” (Q 11:9-13)

Matthew 7:7-11: “Ask and it will be given to you; seek and you will find; knock and the door will be opened to you. For everyone who asks receives; those who seek find; and to those who knock, the door will be opened. Which of you, if your son asks for bread, will give him a stone? Or if he asks for a fish, will give him a snake? If you, then, though you are evil, know how to give good gifts to your children, how much more will your Father in heaven give good gifts to those who ask him!”

Luke 11:9-13: “So I say to you: Ask and it will be given to you; seek and you will find; knock and the door will be opened to you. For everyone who asks receives; those who seek find; and to those who knock, the door will be opened. Which of you fathers, if your son asks for a fish, will give him a snake instead? Or if he asks for an egg, will give him a scorpion? If you then, though you are evil, know how to give good gifts to your children, how much more will your Father in heaven give the Holy Spirit to those who ask him!”

Gospel of Thomas 92: Jesus says, “Seek and you will find.”

Gospel of Thomas 94: Jesus says: “The one who seeks will find. The one who knocks, to that one will it be opened.”

There is so much to say in regards to this week’s saying. The passage has been touted by sincere Christians wanting to encourage others to have assurance in relation to their prayers. I believe that interpretation takes this week’s saying out of its context.

Most Q scholars believe that this saying originally appeared right after the section we call the Lord’s prayer. This means that Jesus isn’t trying to bolster up our confidence in prayer or setting us up for disappointment when things don’t work out the way we hoped.

In the Lord’s prayer, Jesus has just called us to pray for debt cancellation, today’s bread, and freedom from testing and trials. So with this week’s saying, Jesus is trying to inspire hope in that prayer. He is pleading with his audience to lean into the risk of being the first to set in motion economic revolution and then trust that it will come back around.

Remember, as we’ve said this year, God’s reign in Q is about trusting enough that God will send people to take care of you when you are in need tomorrow that you choose to be the person God sends to take of someone else today. Jesus’s saying is not on prayer in general. It’s specially in the context of trusting that Jesus’ economic plan will really work so we can let go and share.

If we do trust that if we seek this new world of people taking care of people, we will find it. If we knock on that door, it will open. Asking for today’s bread, we won’t get stones. Asking for fish, we won’t get snakes. And if we know how to take care of our kids, how much more will we, too, as we reach out to each other, also be taken care of.

Jesus shared this saying in the context of our fear or anxiety about following Jesus in mutual aid, resource-sharing, wealth redistribution, and praying for our and others’ debts to be cancelled.

That this saying ever made it out of its original Judean context to the more Platonic context in the region around Edesse, where modern scholars believe that the Gospel of Thomas originated, suggests that this is a saying of the historical Jesus and not simply a saying attributed to him after his death. There are a few points of evidence for this.

Matthew, believed to have been written before Luke, preserves the concrete, economic language in this week’s saying, even though the author of Matthew separated it from the Lord’s prayer by a whole chapter’s* worth of instruction. Luke, on the other hand, keeps this saying in the context of the Lord’s prayer but changes the wording dramatically to petition not for bread, resources, or debt cancellation but for the Holy Spirit.

The Holy Spirit is a unique element in the books attributed to Luke. In both Luke and Acts, the Holy Spirit plays a much more substantial role than in Mark’s, Matthew’s or John’s gospels. Luke uses this saying about prayer to prepare us for what will later happen in Acts when the Holy Spirit is “given.” We’ve witnessed this kind of change before. In last week’s saying, too, Luke changed the earliest emphasis on debts being cancelled into personal grievances being forgiven. (See The Lord’s Prayer.)

As we said last week, both versions can be true. They are not necessarily mutually exclusive. They are different, however, and these differences should not be glossed over as we study the canonical gospels.

I feel very strongly when we remove this saying from its context and make it about generic prayer rather than prayer specifically for economic revolution, then our false expectations set us up for deep disappointments. We might pray for something important to us and place all our hopes in what seems to be a magical promise, only to watch what we pray for not materialize.

A friend of mine recently claimed this passage as he interviewed over for job after job. He “asked, sought, and knocked,” only to be told repeatedly he was not what each company was looking for. After this series of disappointments, he wrote:

His disappointment over his unanswered prayer was only worsened by the false expectations of prayer that he’d been taught. Understanding this saying as a proverb about all prayer was emotionally damaging in a disheartening situation.

So how should we understand this passage?

In light of Jesus’ “year of the Lord’ favor,” the year when all debts should be cancelled (Deuteronomy 15:1), imagine you are one in Jesus’ audience who both owes others money and is also owed money by others. You depend on being repaid to repay those you owe, and you have real anxiety about releasing those who owe you and the fear that those you owe will still hold you accountable is real. Jesus encourages you, “Ask, seek, knock. You won’t get a stone, and you won’t get snakes.”

Say you are one who barely has enough for yourself to survive from day to day. Jesus’ words on mutual aid and resource sharing activate your fear that you will go without if you share with others, and your self-preservation impulse is triggered. Jesus again encourages you, “Ask, seek, knock. You won’t get a stone, you won’t get snakes.”

Or imagine you are someone very wealthy in Jesus’ audience. You have taken savvy risks with your money. You have been careful and  overcome bad turns of events. Things may not have always gone your way, but somehow, today, you have come out on top. Jesus asks even you to voluntarily redistribute your wealth to those with great needs around you. Jesus is asking you to let go of your fear of what may happen to you in the future and to prioritize taking care of people today over profit so that you can survive what may come tomorrow. The fear is real, and yet Jesus encourages you, “Ask, seek, knock, you won’t get a stone, you won’t get snakes.”

It is easier to interpret this saying as about all prayer rather than specifically about the prayer Jesus taught. But we must allow the context of this saying to confront us, to inspire us to take specific economic action, and not to give us false hope. When we minimize the economic meaning of this saying, we only set ourselves up for grief when our expectations aren’t met.

Remember, the reign of God is not God simply raining down what we pray for from some place above. God’s reign, for Jesus, is people taking care of people. People who take responsibility for people, balancing the needs of each individual with the needs of the community, the human community, and the global community, and this would today include the care of the earth itself. Trusting in our choices today, specifically our choices to be the ones who take care of each other, we will be setting in motion an awakening where tomorrow there will be those who will also take care of us.

Recently, in an announcement that she would become a visiting professor at Union Theological Seminar in New York City, Michelle Alexander states, “Without a moral or spiritual awakening, we will remain forever trapped in political games fueled by fear, greed and the hunger for power.”

It is by understanding this week’s saying in its original context that we might be able to recapture a Jesus who called for an awakening in his own society. Two thousand years ago, he hoped for liberation that included being freed from “fear, greed, and the hunger for power.”

So, in this context, let’s consider the courage we’re called to take hold of in these words:

I tell you, ask and it will be given to you, search and you will find, knock and it will be opened to you. For everyone who asks receives, and the one who searches finds, and to the one who knocks will it be opened. What person of you, whose son asks for bread, will give him a stone? Or again when he asks for a fish, will give him a snake? So if you, though evil, know how to give good gifts to your children, by how much more will the Father from heaven give good things to those who ask him! (Q 11:9-13)

This week, as a group, go back to the Lord’s prayer from last week and look at all three sections:

c. Choosing Life rather than Death

However you choose to apply the values we are considering this week, do so in love, till the only world that remains is a world where only love reigns.

*Chapter and verse delineation did not exist in the original documents but were added between the 13th and 16th centuries.