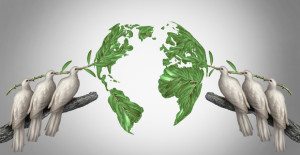 While Jesus was teaching in the temple courts, he asked, “Why do the teachers of the law say that the Messiah is the son of David? David himself, speaking by the Holy Spirit, declared:

This week we are looking at a question Jesus asks in Mark’s gospel on the Tuesday of his final week. So far on that day, Jesus has responded to multiple attempts to discredit him in the eyes of the people after his nonviolent, anti-imperial entry on Sunday and his Temple demonstration against religious imperialism on Monday. For the first time in Mark’s narrative, Jesus moves away from reactive defense of his actions to a more proactive teaching.

As he teaches on King David and the Messiah, Jesus is quite clever. He asks, how can the Messiah be David’s son when David refers to this messiah as “Lord”?

The passage Jesus is referencing is Psalm 110:1, a psalm that reassures David of God’s aid defeating Israel’s enemies :

The LORD says to my Lord:
“Sit at my right hand
until I make your enemies
a footstool for your feet.”

By the 1st Century, according to Marcus Borg and Dominic Crossan in their wonderful volume The Last Week, this psalm had come to be understood as a messianic psalm.

By alluding to this psalm, Mark’s Jesus focuses on how David describes the “coming one” as David’s “Lord.”

Since returning from exile during the 7th Century BCE, the Hebrew people had held the restoration of “the house of David” as a nationalistic hope. The writers of the Jesus story are writing from within this tradition.

Mark wants his readers to see Jesus as superior to David. Jesus is seen by the early Jesus community as the fulfillment of their long held Davidic hope for the liberation of Israel from foreign oppression and the restoration of Israel as a self-determining, self-governing people. Mark’s Jesus was also to be different in some significant ways from the David of the Hebrews’ most cherished stories.

How did the early Jesus community perceive Jesus to be different/superior to David?

Yet the Jesus of the gospels isn’t only opposed to foreign domination systems in Israel. He also imagines a new human society not based on the domination of others at all. For Jesus, our hope as humans is not in our ability to devise more efficient ways of subordinating others, but in creating more effective ways of caring for one another:

They came to Capernaum. When he was in the house, he asked them, “What were you arguing about on the road?” But they kept quiet because on the way they had argued about who was the greatest. Sitting down, Jesus called the Twelve and said, “Anyone who wants to be first must be the very last, and the servant of all.” (Mark 9:33-35)

Jesus called them together and said, “You know that those who are regarded as rulers of the Gentiles lord it over them, and their high officials exercise authority over them. Not so with you. Instead, whoever wants to become great among you must be your servant, and whoever wants to be first must be slave of all. (Mark 10.42-44)

Jesus demonstrated that his Way was to lay down our desire to fashion human societies on the basis of domination and choose instead lovingly caring for the needs of one other.

Jesus was committed to nonviolence

Another way the early believers saw Jesus as different from David was in Jesus’ teachings on nonviolence.

Jesus is the long awaited Messiah, and as such has the political/religious title of “son of God.” Mark’s first verse announces “the beginning of the good news about Jesus the Messiah, the Son of God” (Mark 1:1). The title, son of God, had a twofold meaning in the 1st Century. It first pointed back to David who also had the title “son of God” (see Psalm 2:7), and it also poked at the Roman title for Caesar.  All three receive their titles after being anointed.

Jesus is anointed with the Spirit just as Samuel anointed David with oil in the ancient story when David was chosen to be king (1 Samuel 16:13). Yet Mark’s anointing Spirit comes in the form of a dove.

“Claudius entered on his belated public career as Gaius’s colleague in a two-months’ consulship; and when he entered the Forum with the consular rods, an eagle swooped down and perched on his shoulder.” (Suetonius, Claud. 7)

“At Bononia, where the army of the Triumvirs Augustus, Antony, and Lepidus was stationed, an eagle perched on Augustus’s tent and defended itself vigorously against the converging attack of two ravens, bringing both of them down. This augury was noted and understood by the troops as portending a rupture between their three leaders, which later took place.” (Suetonius, Aug. 94)

“By the brave and good, are the brave created: their sire’s virtues exist in horses and men, while the ferocious golden eagles don’t produce shy doves.” (Horace, Odes 4.4)

(For more on this line of thought see Jesus and the Dove: how a Roman audience may have read the Gospel of Mark by Neil Godfrey.)

So what about Jesus and David? If Jesus had only been a 1st Century David figure, the symbolism used for him should have been a fiercer bird of prey than the eagle. (The eagle is an appropriate symbol for a political power that wants to portray itself as undefeatable as eagles have no known natural predators.)

Jesus’ way is the way of the cross, not of a sword. It comes through offering the left cheek rather than striking back; through going the second mile, and throwing off the second garment.

This is why the dove has come to be a symbol of Jesus’ teachings on nonviolence. In the book of Revelation, a lamb defeats a dragon, contrary to most folk stories that picture the dragon feasting on helpless lambs. A great story I learned while I was in Poland (I gave a series of presentations in Czestochowa in the spring of 2003) is of lambs being used subversively to defeat the Wawel dragon.

Yet as I have offered before, Jesus’ nonviolence was not passive withdrawal from crisis or injustice. It was also not merely nonresistance, it was a Way of resistance. Jesus’ nonviolence was self-affirming in a world where the lives of the weak were already being denied by their oppressors. Jesus called his followers to imagine Jewish nonviolent direct action against Roman imperial domination.

David represented the violent defeat of Israel’s enemies—so much so that the Hebrew Bible describes his hands as too bloody to build the temple. Jesus represents the nonviolent end of Israel’s enemies because he transforms those enemies, even the Roman ones, into his friends. As the old proverb goes, “Do I not destroy my enemies when I make them my friends?” Jesus’ nonviolence is rooted in justice for the oppressed. It is the liberation of the oppressed and the transformation of the oppressor.

Violent revolutions like those David once led only place those on the bottom of our societies in a new position of power and create new hegemonies. Jesus’ movement, as shown above in Mark 9 and 10, is non-kyriarchical and is based on service, not domination.

Jesus’ new world is characterized by at least two values: service rather than dominance; and the non-violent self-affirmation of oppressed people alongside the subversion of domination systems and the transformation of those who oppress them.

Jesus showed us The Way. It’s up to us to choose to put his teachings into practice.

Till the only world the remains is a world where love reigns.