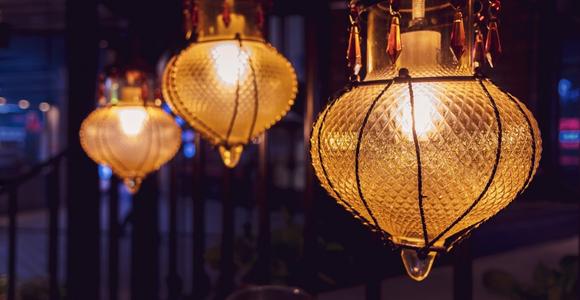 “This story might have spoken to those in Luke’s culture, but it would not work to threaten people in our culture with a burning afterlife. It’s much more realistic to focus on the gains and losses we experience in this life when we practice this kind of indifferent exclusion.”

“There was a rich man who was dressed in purple and fine linen and who feasted sumptuously every day. And at his gate lay a poor man named Lazarus, covered with sores, who longed to satisfy his hunger with what fell from the rich man’s table; even the dogs would come and lick his sores. The poor man died and was carried away by the angels to be with Abraham. The rich man also died and was buried. In Hades, where he was being tormented, he looked up and saw Abraham far away with Lazarus by his side. He called out, ‘Father Abraham, have mercy on me, and send Lazarus to dip the tip of his finger in water and cool my tongue; for I am in agony in these flames.’ But Abraham said, ‘Child, remember that during your lifetime you received your good things, and Lazarus in like manner evil things; but now he is comforted here, and you are in agony. Besides all this, between you and us a great chasm has been fixed, so that those who might want to pass from here to you cannot do so, and no one can cross from there to us.’ He said, ‘Then, father, I beg you to send him to my father’s house—for I have five brothers—that he may warn them, so that they will not also come into this place of torment.’ Abraham replied, ‘They have Moses and the prophets; they should listen to them.’ He said, ‘No, father Abraham; but if someone goes to them from the dead, they will repent.’ He said to him, ‘If they do not listen to Moses and the prophets, neither will they be convinced even if someone rises from the dead.’” (Luke 16:19-31)

Folk tales about reversing circumstances in the next life were a staple in Jesus’ world, in Hellenistic, Roman, and Jewish culture. The author of Luke choosing to contrast the lived realities of the rich and the poor is consistent with the theme of economic justice in this version of the Jesus story.

I love the cultural diversity and richness in this week’s story. The influence of Hellenism comes through in an eternally burning Hades, yet this folk tale is also thoroughly Jewish with the poor person being whisked away, not to a Christian heaven, but to the bosom of father Abraham.

“In order to understand the parable in detail and as a whole, it is essential to recognize the first part derives from a well-known folk material . . . This is the Egyptian folk-tale of the journey of Osiris, the son of Setme Chamois to the under-world . . . Alexandrian Jews brought this story to Palestine, where it became very popular as the story of the poor scholar and the rich publican Bar Ma’Jan.” (Parables, p. 183)

I also want to say something about the Hellenistic idea of flaming torment in the afterlife in this story due to its abuse by Christians throughout history.

This week’s story is a folk tale, but the 1st Century historian Josephus does tell us that some Pharisees taught of an eternal punishment after death:

“They [the Pharisees] say that all souls are imperishable, but that the souls of good men only pass into other bodies while the souls of evil men are subject to eternal [aidious] punishment [timoria]. (Josephus, The Wars of the Jews, Vol. II, Chapter 8, Paragraph 14; words in brackets added.)

The Pharisaical schools weren’t monolithic: they had a rich diversity of ideas about afterlife and resurrection. Josephus’ report could not have been true of all Pharisees, then, but there must have been enough for Josephus to describe their beliefs this way.

The words Josephus used to communicate what these Pharisees were teaching are also interesting. The Greek word he used for eternal is aidious and the Greek word he used for punishment is timoria. According to Louw and Nida’s Greek–English Lexicon of the New Testament Based on Semantic Domains, aidious meant “Pertaining to an unlimited duration of time.” Timoria, on the other hand, meant “to punish, with the implication of causing people to suffer what they deserve.” Thayer’s Greek-English Lexicon of the New Testament explains that the nature of this word is “penal and has reference to the satisfaction of him who inflicts.” Timoria, then is a retributive punishment to satisfy something in the person inflicting the suffering, who feels the offender must experience punishment.

But every time the gospel authors write about Jesus speaking of some type of punishment or reversal of fates either in this life or the next, they use the Greek phrase aionion kolasis for eternal punishment (see Matthew 25:46).

Aionion kolasis was a known phrase among Hellenistic Jews, many of whom populated the region of Galilee where Jesus travelled and taught. Philo, a Hellenistic Jewish philosopher who was a contemporary of Jesus, wrote, “It is better not to promise than not to give prompt assistance, for no blame follows in the former case, but in the latter there is dissatisfaction from the weaker class, and a deep hatred and eternal [aionion] chastisement [kolasis] from such as are more powerful.” (Philo, Fragments)

Mounce’s Concise Greek English Dictionary of the New Testament tells us that aionion is an indeterminate adjective, “indeterminate as to duration.” Thayer’s Greek-English Lexicon of the New Testament tells us anionion “gives prominence to the immeasurableness of eternity.” In other words, it’s not that it lasts forever, but that it takes forever for whatever this adjective is describing to accomplish its purpose. We have as much time as it takes, no matter how long that is.

The meanings of the word kolasis are why this topic pricks my interest. Thayer’s Greek-English Lexicon of the New Testament confirms what we learned earlier about timoria and compares this with the difference of kolasis, “The noted definition of Aristotle, which distinguishes kolasis from timoria is that kolasis is disciplinary and has reference to him who suffers, while the latter timoria is penal and has reference to the satisfaction of him who inflicts.”

In Protagoras, Plato writes, “If you will think, Socrates, of the nature of punishment, you will see at once that in the opinion of mankind virtue may be acquired; no one punishes [kolasis] the evil-doer under the notion, or for the reason, that he has done wrong—only the unreasonable fury of a beast acts in that manner. But he who desires to inflict rational punishment [kolasis] does not retaliate for a past wrong which cannot be undone; he has regard to the future, and is desirous that the man who is punished [kolosis], and he who sees him punished, may be deterred from doing wrong again. He punishes for the sake of prevention, thereby clearly implying that virtue is capable of being taught.”

The purpose of kolasis, then, is to deter others and to discipline or transform the one who experiences it. This implies that the gospel authors using this term want us to imagine a Jesus who taught a restorative punishment rather than a retributive one. If this discipline is to take place in the afterlife, then the people receiving it have all the time that it will take. This kind of punishment is intended to be something that someone passes through and is changed by, not an inescapable fate people are abandoned to.

Even though we’ve been considering Hellenistic sources so far, the idea of using fire to symbolize removing something considered harmful, like fire removes dross from gold, is also a Jewish idea and part of the Hebrew scriptures:

“The sinners in Zion are terrified; trembling grips the godless: ‘Who of us can dwell with the CONSUMING fire? Who of us can dwell with THE EVERLASTING BURNING?’ Those who walk righteously and speak what is right, who reject gain from extortion and keep their hands from accepting bribes, who stop their ears against plots of murder and shut their eyes against contemplating evil.” (Isaiah 33:14, emphasis added.)

In this passage, those who dwell with “the everlasting burning” are the righteous. From this we might understand that the righteous are those those who go through this kind of experience and are transformed.

Back to our reading. This story might have spoken to those in Luke’s culture, but it would not work to threaten people in our culture with a burning afterlife. It’s much more realistic to focus on the gains and losses we experience in this life when we practice indifferent exclusion in the ways of the unnamed rich person in this story.

“The poor are a by-product of the system in which we live and for which we are responsible. They are marginalized by our social and cultural world. They are the oppressed, exploited proletariat, robbed of the fruit of their labor and despoiled of their humanity. Hence the poverty of the poor is not a call to generous relief action, but a demand that we go and build a different social order.” (The Power of the Poor in History, p. 44)

How this week are you being called to prioritize those our present system marginalizes or disenfranchises, politically, socially, economically, or in all three ways?

2. What stories have shaped you in your journey? Share one with your group.

You can find Renewed Heart Ministries on Twitter, Facebook and Instagram. If you haven’t done so already, please follow us on your chosen social media platforms for our daily posts.  Also, if you enjoy listening to the Jesus for Everyone podcast, please like and subscribe to the JFE podcast through the podcast platform you use and consider taking some time to give us a review. This helps others find our podcast as well. 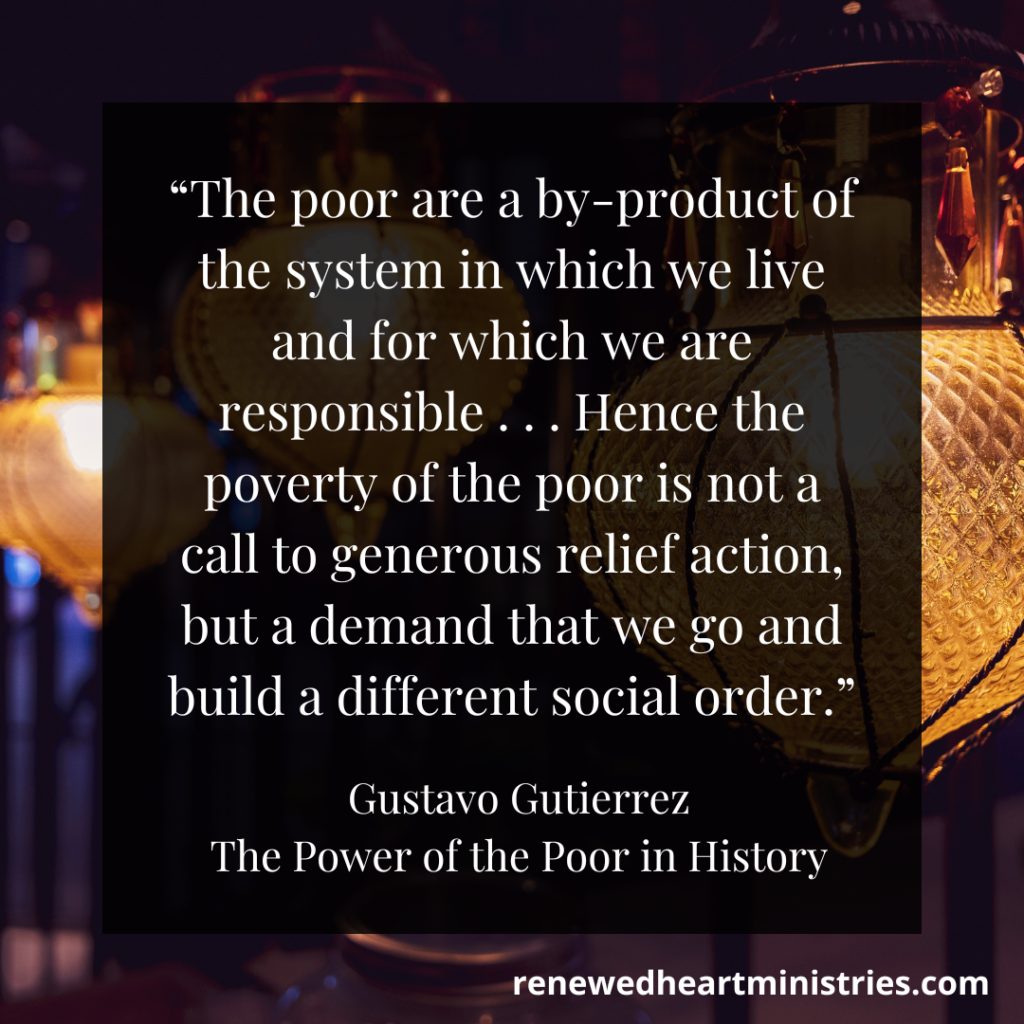