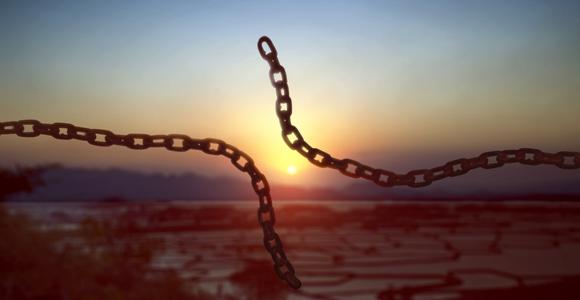 We don’t see Luke’s Jesus traveling around passing out tickets to heaven; instead we see him teaching a more socialized way of living here on earth that could lift up the marginalized and downtrodden from the harms their society was committing against them.

Our reading this week is from the gospel of Luke.

“Do not be afraid, little flock, for your Father has been pleased to give you the kingdom. Sell your possessions and give to the poor. Provide purses for yourselves that will not wear out, a treasure in heaven that will never fail, where no thief comes near and no moth destroys. For where your treasure is, there your heart will be also.

“But understand this: If the owner of the house had known at what hour the thief was coming, he would not have let his house be broken into. You also must be ready, because the Son of Man will come at an hour when you do not expect him.” (Luke 12:32-40)

The first portion of this week’s reading centers on Jesus’ ethic of resource-sharing and wealth redistribution as a universal expectation for all of Jesus’ followers. This is the same ethic Jesus called individuals to elsewhere in the gospel stories (see Luke 18:22, Mark 10:21, and Matthew 19:21). But in Luke, this ethic of sharing and redistribution was not for isolated individuals in specific situations, but for every able Jesus follower.

There’s a similar principle in the companion book to Luke’s gospel, the book of Acts:

“Those who accepted his message were baptized, and about three thousand were added to their number that day. They devoted themselves to the apostles’ teaching and to fellowship, to the breaking of bread and to prayer. Everyone was filled with awe at the many wonders and signs performed by the apostles. All the believers were together and had everything in common. They sold property and possessions to give to anyone who had need. Every day they continued to meet together in the temple courts. They broke bread in their homes and ate together with glad and sincere hearts, praising God and enjoying the favor of all the people. And the Lord added to their number daily those who were being saved.” (Acts 2:41-47, emphasis added)

“All the believers were one in heart and mind. No one claimed that any of their possessions was their own, but they shared everything they had. With great power the apostles continued to testify to the resurrection of the Lord Jesus. And God’s grace was so powerfully at work in them all that there were no needy persons among them. For from time to time those who owned land or houses sold them, brought the money from the sales and put it at the apostles’ feet, and it was distributed to anyone who had need.“ (Acts 4:32-35)

This is the basis for the story of Ananias and Saphira (Acts 5) and the story about the Hellenistic widows in the early Jesus movement being overlooked and not receiving shared resources (Acts 6).

Most Christians exclude this practice from their Jesus-following today but early Jesus followers couldn’t exclude it. It was expected that Jesus followers would practice this principle. We don’t see Luke’s Jesus traveling around passing out tickets to heaven; instead we see him teaching a more socialized way of living here on earth that could lift up the marginalized and downtrodden from the harms their society was committing against them.

It’s a competing vision for organizing our world. We can follow the path of rugged individualism where isolated people place their assurance in how much wealth they have hoarded to provide for themselves and their needs. Or we can follow the path of Jesus, where we are investing in one another and creating a community that shares resources so that if we ever have needs, we also have each other. No matter what the future brings, we can face it together because we have each other’s back.

This is how I interpret the following passage:

“Provide purses for yourselves that will not wear out, a treasure in heaven that will never fail, where no thief comes near and no moth destroys. For where your treasure is, there your heart will be also.”

As I shared last week from the work of James Robinson:

“[Jesus’] basic issue, still basic today, is that most people have solved the human dilemma for themselves at the expense of everyone else, putting them down so as to stay afloat themselves. This vicious, antisocial way of coping with the necessities of life only escalates the dilemma for the rest of society.” (The Gospel of Jesus: A Historical Search for the Original Good News, Kindle location 138)

We can store up wealth or invest in building communities where we take care of each other. For wherever our treasure is, there our hearts will be also.

The next part of our reading transitions away from resource-sharing and wealth redistribution and focuses on examples of watchfulness and alertness.

This is another place in the Jesus story where we must be honest about context. The authors of the early Jesus story never assumed a world where some humans were not owned in some form by others. All the way to the final book in the New Testament cannon, we still encounter the language of masters and slaves.

As much as I wish the writers of our sacred texts had had large enough imaginations to envision a world without slaves, the fact is that they didn’t. But today, as Jesus followers, we can and must do better. Rather than using the scriptures as a justification for injustice when we encounter it, we can be honest about the shortcomings of our sacred texts and take the ethics of love, compassion, justice and mercy, the golden rule, etc. to their logical conclusions and applications, further than the authors of our texts could or did. Today we can work toward a world with no more masters and no more slaves. As Marx and Engles used to say, “we have nothing to lose but our chains.”

Lastly, I want to address an unsettled debate among Jesus scholars today. There are two camps among scholars of the historical Jesus. One believes that Jesus, like John the Baptist, Paul, and Paul’s Christian converts, subscribed to apocalypticism and believed the world was about to end. The other camp believes Jesus did not hold this view but was laying down ethical teachings that could become a long-term lifestyle here on earth, a way of living that was salvific in the sense that it saved us from structures of violence, oppression and injustice offering a different way of ordering our world. (If this debate is new to you, let me recommend a small, introductory book: The Apocalyptic Jesus: A Debate by Robert J. Miller and Dale C. Allison Jr.).

This debate has practical implications for how we choose to live today. Were Jesus’ ethical teachings of resource-sharing and wealth redistribution a short-term way of living because the world was about to end? Does that mean that we cannot possibly be expected to practice them long term or apply them to our lives today? This interpretation would be very convenient for the billionaire class or a capitalistic society!

Or, much more challenging, was Jesus different from John the Baptist and Paul in this sense? Was he laying down a livable ethic of community and taking care of one another that we can apply to our lives long term and use to organize our societies and economies in a different way? Was Jesus imagining a world where we didn’t live by a system that produced winners and losers no matter how many had equal opportunity to play the game? Or was he imagining a world where everyone had what they needed to thrive?

There are signs of this ethic in the ancient Hebrew story too:

I believe the ethics we find in the Jesus story are livable, and regardless of where we land on scholarly debates about the historical Jesus, I hope that we can agree that a world where we take care of each other rather than leaving each person on their own to take care of themselves is a much better world to live in and the kind of world we would all want to live in.

This topic can lead us to heated discussions about things like taxes, wealth limits, redistribution, universal health care and child care, universal basic income, and more. And when I look around at today’s disparities and the harm being produced, these are discussions worth having.

There’s a lot to ponder here. How does our Jesus story where Jesus tells his followers, “Sell your possessions and give to the poor” have any application to our economic challenges today?

2. What are some present-day applications to current political and economic debates around economic justice in our society today? Rather than labelling positions as liberal or conservative, grade various opinions along a spectrum from closer to far away from the world-vision we have been reading in the past two weeks here in Luke. Discuss with your group. 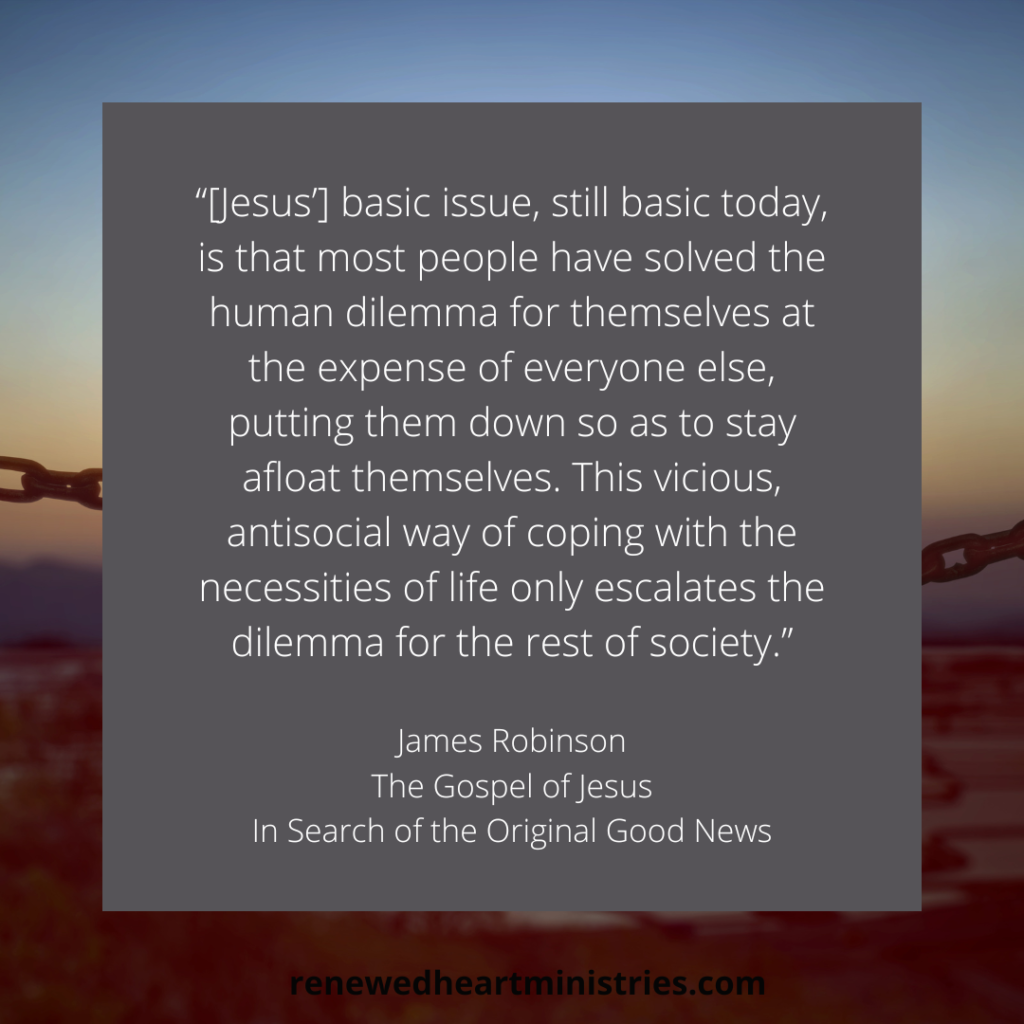