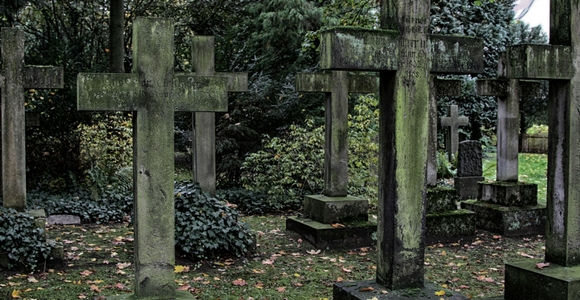 “Taking up one’s cross is not a call to patiently, passively endure, but to take hold of life and stand up against injustice even if there is a cost for doing so.”

The one who does not take one’s cross and follow after me cannot be my disciple. Q 14:27

Matthew 10:38: “Whoever does not take up their cross and follow me is not worthy of me.”

Luke 14:27: “And whoever does not carry their cross and follow me cannot be my disciple.”

Before we begin, and given the events of this past week here in the U.S., we at Renewed Heart Ministries reaffirm our commitment to stand with our transgender and gender nonconforming family and friends. We will continue working alongside each of you to end discrimination, transphobia and false gender constructs within our society. We value you and we are glad you are here. You are not alone. You are loved. You are worthy. And you Matter.

I have been waiting for months for us to get to this week’s saying.

Last fall, I was invited to a conference on nonviolence and the atonement. I chose to speak on violent forms of nonviolence: how atonement theories that treat the violent death of Jesus as salvific don’t bear nonviolent fruit toward the survivors of violence. We considered how penal substitution has produced violence, and we also weighed the violence that has come from more “nonviolent” theories such as moral influence and Christus Victor. I wish the recordings of those talks had been published. I will be giving a very similar presentation again this October and I will make sure that RHM publishes the recording.

This week’s saying is related to all of this. “Taking up one’s cross” has been used over and over to prioritize oppressors over survivors and to encourage the oppressed to passively and patiently endure. These ways of interpreting our saying this week have proven very convenient for oppressors and those who don’t want to disrupt the power imbalance of the status quo.

When one spouse suffers physical or emotional abuse at the hands of another, for example, how many times have Christian pastors counseled the abused spouse to “bear their cross,” be “like Jesus,” and simply “turn the other cheek”? We have covered previously in this series how turning the other cheek was for Jesus a call to creative, nonviolent forms of disruption, protest and resistance. It gave those pushed to the undersides and edges of society a way to reclaim and affirm themselves despite being dehumanized. This week, I want to suggest, as feminist and womanist scholars also do, that “taking up one’s cross” is not a call to patiently, passively endure, but to take hold of life and stand up against injustice even if there is a cost for doing so. This saying is not a call to passively suffer, but to protest even if the status quo threatens suffering.

There is a subtle difference, but the implications are huge. What we are discussing this week is called the myth of redemptive suffering. We have repeated Joanne Carlson Brown and Rebecca Parker statement in their essay God So Loved The World? that by now most of you should have it memorized.  I have repeatedly used it this year to lead up to what our saying that are considering this week.

“It is not acceptance of suffering that gives life; it is commitment to life that gives life. The question, moreover, is not, Am I willing to suffer? but Do I desire fully to live? This distinction is subtle and, to some, specious, but in the end it makes a great difference in how people interpret and respond to suffering. If you believe that acceptance of suffering gives life, then your resources for confronting perpetrators of violence and abuse will be numbed.” (Christianity, Patriarchy, and Abuse, pp. 1-30)

What was Jesus talking about, then, when he said “take up your own cross?”

First, Borg and Crossan’s correctly remind us that Jesus’ cross in the gospels was about participation, not substitution:

“For Mark, it is about participation with Jesus and not substitution by Jesus. Mark has those followers recognize enough of that challenge that they change the subject and avoid the issue every time. (Marcus J. Borg and John Dominic Crossan. The Last Week: What the Gospels Really Teach About Jesus’s Final Days in Jerusalem (Kindle Locations 1589-1593)

While I agree with Borg and Crossan’s about participation rather than substitution, I disagree with their interpretation that a cross (suffering) was an intrinsic part of following him. I do not subscribe to the idea that suffering is an intrinsic precursor of triumph or success. Suffering only enters into the picture of following Jesus if those benefitting from the status quo feel threatened by the changes that Jesus’ new social vision would make and threaten Jesus’ followers with a cross. In other words, being willing to take up one’s cross is not the call to be passive in the face of suffering, but to protest and resist in the face of being threatened with a cross.

Jesus could have very well said, “Anyone who is not willing to protest and resist, even in the face of a threatened cross, is not worthy of me.” “The cross” in this context does not mean remaining passive. It means being willing to endure the results of disrupting, confronting, resisting, and protesting injustice. The cross is not a symbol of passivity but of the consequences of resistance: it is a symbol of the suffering that those in power threaten protestors with to scare them into remaining passive. Remember, the question is not how much am I willing to suffer, but how badly do I want to live!

If those in power threaten you with a cross, then it become necessary for you to take up a cross to stand up against injustice. Otherwise, the cross never comes into the pictures. Protesting, for instance, does not always involve being arrested, but if it does, protest anyway! Just two weeks ago, Rev. Dr. William Barber II was arrested during a healthcare bill protest. Actor James Cromwell is in jail now for participating with others in an environmental protest in upstate New York.

The goal in scenarios like these is not to suffer, but to refuse to let go of life. Again, the question is not are you willing to suffer, but do you desire to fully live?

How one interprets this week’s saying has deep implications for survivors of relational violence, and for all who are engaging any form of social justice work. When those who feel threatened try to intimidate and silence your voice through fear of an imposed “cross,” this week’s saying calls us to count the cost and then refuse to let go of life. Do not be silenced. Reject death.

Too often, Jesus’ teaching of taking up the cross has been interpreted so that the abuse itself is the cross.

Instead, consider that the abuse is not the cross but an initial injustice. In this model, the cross is the threats one receives for standing up to or resisting injustice. 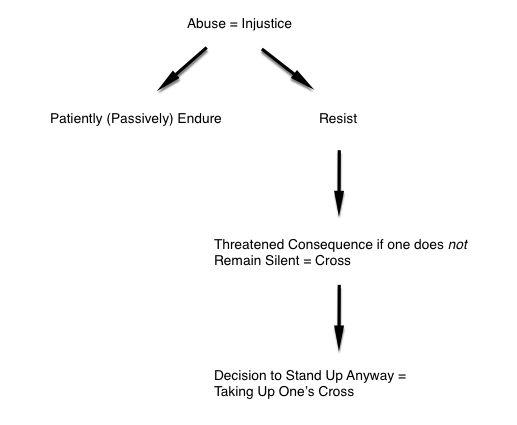 My interpretation of this week’s saying is that Jesus is not encouraging his followers to remain passive, but to resist. And if a cross comes into the picture, then resist anyway. Jesus’ nonviolence was rooted in resistance, and sometimes change happens before there is a cross. So bearing a cross is not intrinsic to following Jesus. It only enters the picture when those who are threatened choose to add it.

Jesus was proposing a new social vision, a way of doing life as a community, that threatened those most benefited by systems of domination and exploitation. The way of Jesus was rooted in resource-sharing, wealth redistribution, and bringing those on the edges of society into a shared table where their voices could be heard and valued too. Did the early Jesus movement threaten those in positions of power and privilege? You bet. Jesus, this week, seems to be saying, when those in power choose to threaten crosses for those standing up to systemic injustice, don’t let go. Keep holding on to hope even in the face of impossible odds. Keep holding on to life—life to the full.

“The one who does not take one’s cross and follow after me cannot be my disciple.” Q 14:27

This week, take time to thoughtfully read and consider Brown and Parker’s entire essay For God So Loved the World?

I agree with Brown and Parker. Their interpretation may be subtle, but it makes all the difference in the world in how we respond to suffering and oppression.

Next weekend is our first 500:25:1weekend event in Asheville, NC. And we’re scheduling many more after this one. I’m so excited to be moving in this new direction with our community. If you haven’t signed up to be part of making these events happen you can do so at http://bit.ly/RHM500251. There you can also find out why we are making these changes, how support these new weekend events, and most importantly, how you can have us come to your community too.

I’m so glad you checked in with us this week.

Keep living love right there where you are. And know you are not alone.  As we are engaging the teachings of Jesus, seek out ways you, too, can participate in the work of survival, resistance, liberation, restoration, and transformation. Till the only world that remains is a world where only love reigns.