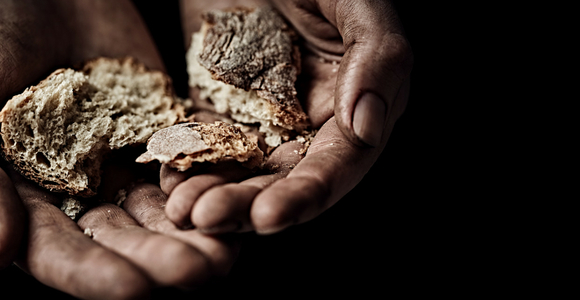 “The poverty of the poor is not a call to generous relief action, but a demand that we go and build a different social order.” — Gustavo Gutiérrez; The Power of the Poor in History

This week we’ll wrap up our series with this section of Mark’s gospel. Jesus is inviting a wealthy inquisitor to join him in practicing Jesus’ preferential option for the poor.

I’m also reminded of a discussion I had years ago with a pastor while I was visiting his church. He confronted me with my concern for the poor, and said that the “rich need the gospel, too.” He felt that plenty of churches in his area practiced charity (not justice, mind you, but charity) for the poor, but he believed he was called to lead his church to minister to the spiritual needs of the wealthy.

As he continued to explain why didn’t focus on poverty, a poverty I believe is created by the current social order, my mind wandered to our passage this week. Let’s take a closer look at it.

The first thing we see in this passage is Jesus’ love for this man. Jesus doesn’t hate the wealthy. No. Mark’s Jesus loves both the rich and the poor. The system that creates wealth disparity, with concentration of riches on one side of the spectrum and poverty on the other, dehumanizes both the rich and the poor. It dehumanizes both differently, but both ends of the spectrum are dehumanizing. Whereas poverty steals a person’s humanity, wealth can cause people to lose their connection with and become isolated from their own humanity and forget their interconnectedness with the humanity of others.

In this context, Jesus’ love for this rich young man speaks to me. Jesus loves him and thus seeks to reconnect him with the humanity of “the poor” and thus his own humanity as well. Wealth redistribution is rooted in regaining our humanity no matter which section of the wealth/poverty spectrum you find yourself on.

I agreed with my pastor friend that Jesus loves the rich, too. Because he loves them, he calls them to join him in his service to the poor. Jesus didn’t minister to the wealthy and the poor differently. He practiced a preferential option for the poor and called the wealthy to join him. Jesus didn’t minister to the wealthy by ignoring the poor. Jesus ministered to the rich young man by calling him to “Go, sell everything” he had “and give [it] to the poor.”

Jesus ministered to the rich of his own society by calling them out of a system that created gross wealth disparity and into a system that redistributed wealth, that recognized the humanity of everyone, and that distributed justice to ensure everyone had the means they needed to survive and thrive.

My pastor friend argued that this was only counsel for the young man in the story. Certainly Jesus saw the unique needs of that specific young man. But in Luke and Acts, this was not a unique teaching but one that Jesus gave to his entire audience in mass:

“Do not be afraid, little flock, for your Father has been pleased to give you the kingdom. Sell your possessions and give to the poor. Provide purses for yourselves that will not wear out, a treasure in heaven that will never fail, where no thief comes near and no moth destroys. For where your treasure is, there your heart will be also.” (Luke 12:32-34, emphasis added.)

In Acts, believed to have been written by the same author(s) as Luke, the very first thing followers of Jesus are characterized by is these kinds of actions:

“Those who accepted his message were baptized, and about three thousand were added to their number that day. They devoted themselves to the apostles’ teaching and to fellowship, to the breaking of bread and to prayer. Everyone was filled with awe at the many wonders and signs performed by the apostles. All the believers were together and had everything in common. They sold property and possessions to give to anyone who had need.” (Acts 2:40-45, emphasis added.)

The entire community practiced this preferential option for the poor to the extent that wealth disparity was replaced with a distributive justice and there were no more poor among them.

“All the believers were one in heart and mind. No one claimed that any of their possessions was their own, but they shared everything they had. With great power the apostles continued to testify to the resurrection of the Lord Jesus. And God’s grace was so powerfully at work in them all that there were no needy persons among them. For from time to time those who owned land or houses sold them, brought the money from the sales and put it at the apostles’ feet, and it was distributed to anyone who had need.” (Acts 4:32-35, emphasis added.)

But like the young man in the story above, my pastor friend choose to go a different route.

I have often quoted this passage from James Robinson’s volume, The Gospel of Jesus: A Historical Search for the Original Good News:

“[Jesus’] basic issue, still basic today, is that most people have solved the human dilemma for themselves at the expense of everyone else, putting them down so as to stay afloat themselves. This vicious, antisocial way of coping with the necessities of life only escalates the dilemma for the rest of society . . . I am hungry because you hoard food. You are cold because I hoard clothing. Our dilemma is that we all hoard supplies in our backpacks and put our trust in our wallets! Such “security” should be replaced by God reigning, which means both what I trust God to do (to activate you to share food with me) and what I hear God telling me to do (to share clothes with you). We should not carry money while bypassing the poor or wear a backpack with extra clothes and food while ignoring the cold and hungry lying in the gutter. This is why the beggars, the hungry, the depressed are fortunate: God, that is, those in whom God rules, those who hearken to God, will care for them. The needy are called upon to trust that God’s reigning is there for them (“Theirs is the kingdom of God”) . . . Jesus’ message was simple, for he wanted to cut straight through to the point: trust God to look out for you by providing people who will care for you, and listen to him when he calls on you to provide for them.” (Kindle Edition, Location 117)

After the wealthy young man departs, the story shifts to Jesus’ interchange with his disciples.:

On interpreting this passage, I land instead with scholars like Stant Litore who suggest that Jesus said it is easier to thread one of the big ropes used by the fishing community, which many in his audience were from, through the eye of a sewing needle than it is for a rich man to enter the kingdom of heaven. In Aramaic, the words for rope and camel have the same spelling. Aramaic did not use vowels, so these words would have been pronounced differently but written the same way.

In Greek, too, specifically the common Koine Greek of working and poor people, the words for rope and camel are also very similar. The difference is in a single vowel: kamélos (camel) and kamilos (rope), but the prounuciation is the same. The meaning of the phrase remains the same: It is impossible for either a camel or a large fishing rope to be threaded through a small sewing needle.

Jesus isn’t making it hard for rich people to “enter” his kingdom of resource sharing, mutual aid, cooperation, and a just distribution of the resources needed for survival and thriving. Instead he’s simply being honest about how difficult it is for people with accumulated wealth to embrace this world. A rope (or camel) won’t fit through the eye of a needle. And for the rich to enter Jesus new human society, here and now, they must be willing to let go of their wealth and embrace a distributive justice where everyone has enough.

Again, Jesus isn’t picking on the rich. He’s simply saying that in his vision for human society there’s no longer a wide chasm between the rich and poor. His vision is a society where everyone has enough to thrive. No more rich. No more poor. The sun shines and the rain falls indiscriminately on all.

Today we live in a world where the few who are on top are striving to maintain their position of control. But if one looks, on the horizon, a new day is coming. Will that new day bring a world that is safe, just, and compassionate for everyone regardless of their race, gender, orientation, gender identity and expression, current economic status, ability, age, and education? It’s up to us. We can make it that way, if we choose to.

Another world is not only possible, it’s coming. Change is coming. Let’s make the choices that ensure that that change is for the better.

As of yesterday’s U.S. Supreme Court deadline, over 900 parents are still separated from their children. Here are three ways your HeartGroup can do something.

Wherever you are this week, right where you are, keep living in love, survival, resistance, liberation, reparation, and transformation. Together we can make our world a safe, just, compassionate home for us all.