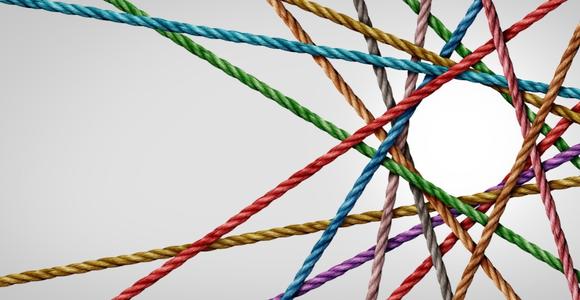 “Luke’s Jesus does not rebuke Mary for taking up space that is often reserved only for men. He, instead, praises her.”

As Jesus and his disciples were on their way, he came to a village where a woman named Martha opened her home to him. She had a sister called Mary, who sat at the Lord’s feet listening to what he said. But Martha was distracted by all the preparations that had to be made. She came to him and asked, “Lord, don’t you care that my sister has left me to do the work by myself? Tell her to help me!” “Martha, Martha,” the Lord answered, “you are worried and upset about many things, but few things are needed—or indeed only one. Mary has chosen what is better, and it will not be taken away from her.” (Luke 10:38-42)

This story is only found in Luke’s version of the Jesus story, but its inclusion suggests some of the struggles that the early Jesus movement might have been facing. I also think there is something for us today.

This story challenged the gender assumptions and gender roles for women in certain 1st Century cultures. It contrasts the domestic role of hostess with that of the rabbi or teacher. What we miss being so far removed from the culture in which this story was created is that according to Luke, the early Jesus movement opened the role and authority of being a teacher to women.

I don’t disparage Martha’s labor, however. Her role in this story was in her culture and conditioning, and was the best way she knew to express her devotion to Jesus. Within 1st Century Jewish culture, hospitality was deeply important, and it involved food preparation for guests that was generally required of the woman of the house. Martha was doing the best she knew to do in relation to Jesus’ presence as a guest in her home.

We can affirm Martha’s actions in her cultural context while critiquing similar cultural assumptions about women, too.

In this story, Mary is the transgressor. What I mean by this is that Mary chooses to transgress patriarchal, gender binary, gender role assumptions. The story also lauds her as having done a good thing! This is a heavy critique on gender exclusivity. Let’s unpack Mary’s actions a bit more. The following comes from the IVP New Testament Background Commentary:

“People normally sat on chairs or, at banquets, reclined on couches; but disciples sat at the feet of their teachers. Serious disciples were preparing to be teachers—a role not permitted to women. (The one notable exception in the second century was a learned rabbi’s daughter who had married another learned rabbi; but most rabbis rejected her opinions.) Mary’s posture and eagerness to absorb Jesus’ teaching at the expense of a more traditional womanly role (10:40) would have shocked most Jewish men.” (p 218)

Rabbis were typically men, and so those sitting at the feet of other rabbis hoping to learn from and one day become rabbis themselves were also men. In the patriarchal cultural expectations of the time, Mary was supposed to be either at the back of the room standing if she wanted to hear Jesus’ teaching or not in the room at all but helping Martha in the kitchen.

These gender assumptions are being challenged by this week’s story. Women are equals here, in the Jesus movement. And in this story, the role and authority of teacher is open to women just as much as it is to men.

This is a strong message and should be weighed carefully by all Christian communities and institutions that relegate women in ministry to some other designation than those open to men. This story may even have been written in response to other statements in the early writings of the Jesus movement that we now call the New Testament. The New Testament is not monolithic, and we must ask ourselves which statements about women in it are life-giving and which are harmful. We have a choice to make when we find a conflict in our sacred texts. Not only should we lean into passages that are most life-giving for all, we should also embrace life-giving interpretations. Luke’s Jesus does not rebuke Mary for taking up space that is often reserved only for men. He, instead, praises her.

In 1st Century Rome, “Lord” was the title reserved for Caesar, so to refer to Jesus as Lord wasn’t as much religious as it was political. In Luke especially, from the pre-birth and infancy narratives through the stories of his adulthood, Jesus is over and over again contrasted with the Roman Caesar. When people call Jesus “Lord” in Luke, it meant they subscribed to Jesus’ teaching that society should be organized otherwise than it was shaped and organized under Rome and Caesar. This is one reason the early gospel so appealed to marginalized and vulnerable people pushed to the edges and undersides of Roman society. The concept of Jesus’ Lordship may have begun as a critique of how Jews were treated under the Roman empire (see Mark and Matthew) but by Luke it also included Gentiles who were oppressed and exploited under Rome.

This calls into question a claim making the rounds again on social media: It’s the false claim that “Jesus didn’t use politics.”

We must remember a few things.

First, Jesus wasn’t living in a democracy but an authoritarian empire.

Second, Jesus didn’t even belong to the privileged class of citizens of the Roman empire. Howard Thurman comments on this:

“Jesus was not a Roman citizen. He was not protected by the normal guarantees of citizenship—that quiet sense of security which comes from knowing that you belong and the general climate of confidence which it inspires. If a Roman soldier pushed Jesus into a ditch, he could not appeal to Caesar [like Paul]; he would just be another Jew in the ditch . . . Unless one actually lives day by day without a sense of security, he [sic] cannot understand what worlds separated Jesus from Paul at this point.” (Howard Thurman, Jesus and the Disinherited, p. 33)

By contrast, Paul did use his political privilege to “appeal to Caesar” when he was imprisoned.

Third, Jesus was deeply political in ways that were available to people living in his social location. What can one do living in an authoritarian society when you are devalued by the state as an outsider? Plenty, and also different things than we might do today. If this is a new thought for you, I want to recommend Ched Myers’ Binding the Strong Man: A Political Reading of Mark’s Story of Jesus.

We live in a different time and circumstance. Though we can learn from the Jesus story and allow it to speak into and inform our justice work today, the political context and the tools we have at our disposal are not always the same.

Lastly, a word about politics.

Politics are about people, the polis, our larger society, and our smaller local community. It’s about what kind of society we want to live in.

As a Jesus follower, I want to live in a society where people matter. People do matter! Therefore politics matter. We also cannot escape the reality that all theology is political as well.

When it comes to matters of murder and theft against them, privileged Christians have no problem with the state intervening. But when it comes a more distributive just society, or protecting the rights of people who are marginalized or devalued, all of a sudden certain privileged Christians cry out, “We are followers of Jesus and shouldn’t use the state. We should be instead about transforming people’s hearts and minds.”

I can’t tell you how tired I am of this lack of logic. I’m sure those with less privileged social locations are even more so.

Reaching people’s hearts and minds and working to change the state are not mutually exclusive. We need not choose between changing peoples hearts and minds or legislating laws, policies, and rights that the state must recognize the state. We can, and I would argue must, be about both approaches if we genuinely care about people who are being harmed within systems of injustice.

Legislation protecting people from being hurt by others plays a strong role in shaping the hearts and minds of future generations as well. Adults a generation from now will value those different from them according to the way their society’s laws socialized them to.

Jesus was political in ways that were available to him. The various versions of the Jesus story in each canonical gospel are political as well. This week, we looked at the politics of gender equality.

Right now, the bodily autonomy and privacy rights of cis women, trans people, and nonbinary folk are under attack, again, in our society.

What is a Jesus who teaches gender equality saying to you?

2. What does a Jesus who teaches gender equality say to you in our present political climate in the U.S.? Discus with your group. 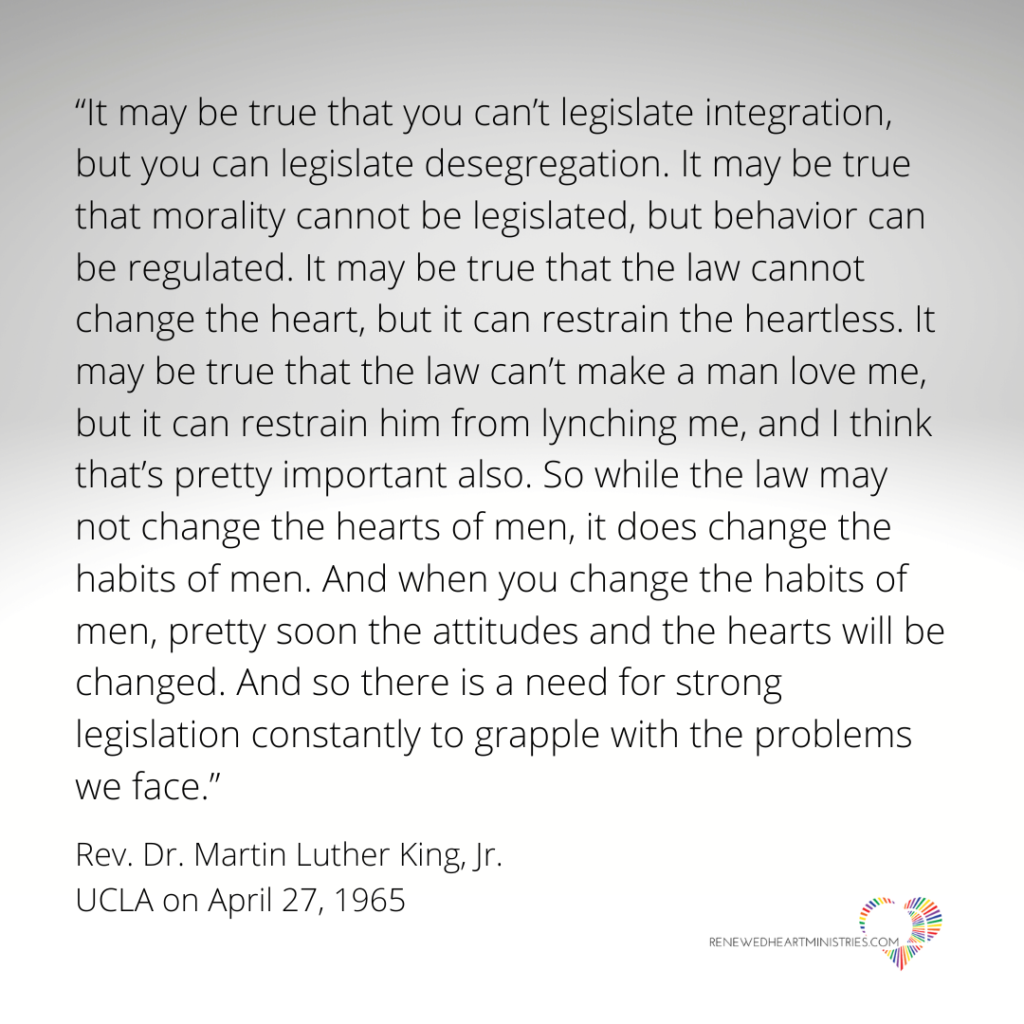