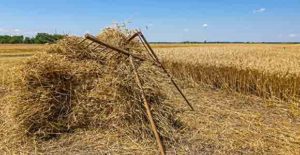 What do you want the next revolution to look like?

“He said to his disciples: The harvest is plentiful, but the workers are few. So ask the Lord of the harvest to dispatch workers into his harvest.” (Q 10:2)

Luke 10:1-2: “After this the Lord appointed seventy-two others and sent them two by two ahead of him to every town and place where he was about to go. He told them, ‘The harvest is plentiful, but the workers are few. Ask the Lord of the harvest, therefore, to send out workers into his harvest field.’”

Matthew 9:35-38: “Jesus went through all the towns and villages, teaching in their synagogues, proclaiming the good news of the kingdom and healing every disease and sickness. When he saw the crowds, he had compassion on them, because they were harassed and helpless, like sheep without a shepherd. Then he said to his disciples, ‘The harvest is plentiful but the workers are few. Ask the Lord of the harvest, therefore, to send out workers into his harvest field.’”

Gospel of Thomas 73: “Jesus says: ‘The harvest is plentiful, but there are few workers. But beg the Lord that he may send workers into the harvest.’”

A Ripe Harvest; No Laborers

The image of a plentiful harvest and few laborers to reap it would have spoken volumes to the audience that Jesus’ teachings resonated with. In that audience would have been indentured farmers who now found themselves being little more than indentured slaves. They had used to own land, but now labored hard to survive from day to day on land that now belonged to their wealthy creditors.

It has been said that you can’t force a revolution, and all one can do is be ready and prepared for one.

The Jewish Roman war of 66-69 CE is evidence of this. This war didn’t just happen out of thin air. There was a long and slow build up that finally erupted, and the horrific outcome was the destruction of Jerusalem in 70 CE. Jesus’s saying this week is best understood with this historical backdrop. His efforts in Sayings Gospel Q are designed to avert failed revolution and the Roman backlash that was sure to come. Just like Hillel before him, Jesus was endeavoring to present a nonviolent revolution of restorative and transformative justice in the place of the divisive and violent revolution and the spirit of retribution that was growing in popularity at that time.

Revolution was brewing. The harvest was ripe. But finding those who understood the larger picture of what would result and how to avert catastrophe was a challenge. The numbers of those who sought out and taught the kind of revolution Jesus taught were few, according to this week’s saying. This different revolution was centered in voluntary wealth-redistribution, in resource sharing, mutual-aid, nonviolent enemy confrontation and transformation, restitution as a response to past injustices, and the restoration of justice to those presently being oppressed. It was rooted in the wealthy forgiving and cancelling debts, and the poor laboring class taking care of the sick and sharing of food with each other. In short, if embraced, it was a way of ordering society that would have revolutionized Jewish society as well as threatened the Roman way of life to its core.

The societal elements were ripe for this kind of harvest, but the workers, those who would labor a revolution characterized by these elements, were few.

The fact that this saying survived to be included in the more platonic, introspective Gospel of Thomas is significant. This statement has an urgency even when removed from its Jerusalem context.

The gospel of Matthew, the first we know to have included this saying, situates it in a more sympathetic, compassionate context. Jesus is traversing the countryside, teaching and healing, and, on seeing the crowds, views the people as “harassed and helpless, like sheep without a shepherd.” More violent “shepherds” would surface in the coming years, and I can’t help but believe that Jesus understood the social dynamics in play and longed to save the “sheep” from being slaughtered.

Luke takes this saying and places a context of Jesus actually appointing and sending out seventy-two promoters, campaigners if you will, that would engage communities ahead of his arrival as he continued to travel and teach. These seventy-two campaigners would have been those who had already bought into the kind of society envisioned in Jesus’ “stump-speeches” later written in Sayings Gospel Q. As we’ve shared in previous weeks, the sayings in Sayings Gospel Q later became Matthew’s sermon on the mount and Luke’s sermon on the plain.

In our time, there are those who believe that a second American Revolution is coming. From those like George Orwell to those in more contemporary counter-cultural movements, some point to ever-worsening polls and people’s growing contempt for their governments as signs. The rumblings of our society suggest that a growing number of people are ripening for another American revolution. It’s not so far-fetched.

As with all revolutions, we have choices. We have an opportunity to shape what our revolution will look like. Could our society benefit in any way from a revolution characterized by some of the values and elements that the Jesus of sayings gospel Q offered? Voluntary wealth-redistribution, resource sharing, mutual-aid, nonviolent enemy confrontation and transformation, restitution as a response to past injustices, and the restoration of justice to those presently being oppressed: could this be a revolution we could live with? We could have a revolution where the wealthy choose to forgive or cancel of the debts of poor debtors, and a society where we take care of the sick together and ensure there is enough for everyone. We could have a safer, more compassionate, just world for us all.

This kind of revolution could begin in the hearts of humanity, allowing us to perceive one another and embrace our interconnectedness, our interdependence. It would transform our society. The reality is that it would also threaten our social elite classes. It could not be accomplished simply by replacing one hegemony with another.

John Lennon wrote, “You can say I’m just a dreamer, but I’m not the only one.” There have been others, in every generation, especially from the marginalized and subjugated classes, that have envisioned this kind of society and worked to garnish support to experiment with what a society like this could look like.

Even theologians, who too often have benefitted in societies of oppression, are also opening up to a different lens. Christians specifically are waking up to a whole new and more historically accurate way of reading the Jesus story itself.

Gustavo Gutierrez, in the 15th anniversary edition of his A Theology of Liberation, states quite correctly:

“Black, Hispanic, and Amerindian theologies in the United States, theologies arising in the complex contexts of Africa, Asia, and the South Pacific, and the especially fruitful thinking of those who have adopted the feminist perspective—all these have meant that for the first time in many centuries theology is being done outside the customary European and North American centers. The result in the so-called First World has been a new kind of dialogue between traditional thinking and new thinking. In addition, outside the Christian sphere efforts are underway to develop liberation theologies from Jewish and Muslim perspectives.”

Where might this revolution begin for us, today, right now? Perhaps with a simple choice from each of us. We can embrace a way of life where people take responsibility for taking care of each other as people taking care of people. This seems to me to be the root that, if really perceived and embraced, could threaten the whole domination structure.

Today, a harvest is ripening.

And, unlike in Jesus’s saying, there are many “laborers” teaching values that parallel and sometimes even center the values and ethics found in the sayings of Jesus in Q. Some of these laborers are within Christianity, but quite a few of them are not. It is this universal set of values that we must begin to recognize.

May it not be said of those who long for more holistic changes and have learned to recognize this universal set of values:

The harvest is plentiful, but the laborers are few. (Q 10.2)

Often our texts this week are used to refer to evangelistic efforts within a Christian religious context where people labor to win as many converts as possible to one’s own religious beliefs. What does it begin to look like for you to take these texts out of that context and place them back within the revolutionary world of the 1st Century?

To each of you out there laboring for change, you’re not alone. Keep living out those values, living in love, setting in motion a different tomorrow. In the words of the late Howard Zinn, “What really matters are the countless small deeds of unknown people that lay the basis for the events of human history. These are the people who have made change in the past; they are responsible for making change in the future, too.” (Quoted in Requiem for the American Dream.)