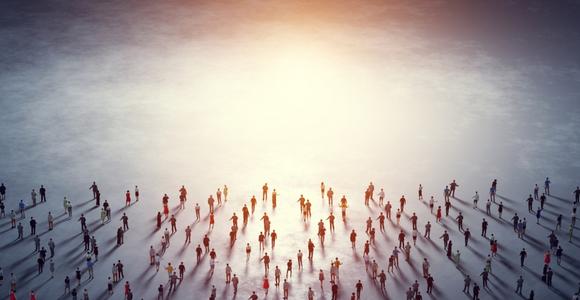 ****This week’s article was written before last Friday’s devastating U.S. Supreme Court ruling. We at Renewed Heart Ministries, as a community of faith, stand in opposition to the decision to remove fifty years of federal protection for the bodily autonomy rights and privacy of cis women as well as trans and nonbinary folk. We will continue to stand alongside those harmfully impacted by these efforts. We feel this week’s article remains relevant. We will have more to say over the coming weeks. ****

“These itinerant workers were to be characterized by dependence, not independence. In the U.S.  today, we live in a hyper-individualistic culture where we are subjected daily to the philosophy of independence and self-sufficiency. Many of us forget that no matter how much we may strive for individual self-reliance and independence, we are still connected to one another. We are part of one another, and we cannot escape the fact that we are in reality truly dependent on one another.”

After this the Lord appointed seventy-two others and sent them two by two ahead of him to every town and place where he was about to go. He told them, “The harvest is plentiful, but the workers are few. Ask the Lord of the harvest, therefore, to send out workers into his harvest field. Go! I am sending you out like lambs among wolves. Do not take a purse or bag or sandals; and do not greet anyone on the road. “When you enter a house, first say, ‘Peace to this house.’ If someone who promotes peace is there, your peace will rest on them; if not, it will return to you. Stay there, eating and drinking whatever they give you, for the worker deserves his wages. Do not move around from house to house. When you enter a town and are welcomed, eat what is offered to you. Heal the sick who are there and tell them, ‘The kingdom of God has come near to you.’ But when you enter a town and are not welcomed, go into its streets and say, ‘Even the dust of your town we wipe from our feet as a warning to you. Yet be sure of this: The kingdom of God has come near.’ Whoever listens to you listens to me; whoever rejects you rejects me; but whoever rejects me rejects him who sent me.”

The seventy-two returned with joy and said, “Lord, even the demons submit to us in your name.” He replied, “I saw Satan fall like lightning from heaven. I have given you authority to trample on snakes and scorpions and to overcome all the power of the enemy; nothing will harm you. However, do not rejoice that the spirits submit to you, but rejoice that your names are written in heaven.” (Luke 10:1-11, 16-20)

This week’s passage is the second time in Luke’s version of the Jesus story that Jesus instructs those he sends out (cf. Luke 9:1-6). Earlier they were instructed to take no staff, no bag, no bread, no money, and no extra shirt. Here they are instructed to not take a purse (i.e. money), a bag, or even an extra pair of shoes.

I appreciate the insights of Stephen Patterson on this passage:

“What does it actually mean for the empire of God to come? It begins with a knock at the door. On the stoop stand two itinerant beggars, with no purse, no knapsack, no shoes, no staff. They are so ill-equipped that they must cast their fate before the feet of a would-be host . . . These Q folk are sort of like ancient Cynics, but their goal is not the Cynic goal of self-sufficiency; these itinerants are set only for dependency. To survive they must reach out to other human beings. They offer them peace—this is how the empire arrives. And if their peace is accepted, they eat and drink—this is how the empire of God is consummated, in table fellowship.” (The Lost Way: How Two Forgotten Gospels Are Rewriting the Story of Christian Origins, pp. 74-75)

These itinerant workers were to be characterized by dependence, not independence. In the U.S.  today, we live in a hyper-individualistic culture where we are subjected daily to the philosophy of independence and self-sufficiency. Many of us forget that no matter how much we may strive for individual self-reliance and independence, we are still connected to one another. We are part of one another, and we cannot escape the fact that we are in reality truly dependent on one another. The COVID-19 pandemic is just the most recent example where independence and interdependence were brought into stark contrast. While many were crying about personal freedoms and individual rights, others focused on the safety of others, society’s common good, and not unnecessarily risking communities’ exposure to a very lethal infection.

I’m thankful for the masks, vaccines, boosters, and other treatments that have helped reduce infections and deaths from COVID since 2020. But through each of these years, we have seen the conflict between those who did not want anyone telling them what to do and those who realized that society’s well-being and safety requires each of us to keep one another safe.

Regardless of which version we read, Jesus’ instructions to his followers all emphasize dependence on those they were going out to serve rather than independence from them. Contrast this with Paul’s teachings—and this is one of the differences scholars recognize between Jesus and Paul:

“Am I not free? Am I not an apostle? Have I not seen Jesus our Lord? Are you not the result of my work in the Lord? Even though I may not be an apostle to others, surely I am to you! For you are the seal of my apostleship in the Lord. This is my defense to those who sit in judgment on me. Don’t we have the right to food and drink? Don’t we have the right to take a believing wife along with us, as do the other apostles and the Lord’s brothers and Cephas? Or is it only I and Barnabas who lack the right to not work for a living? . . . If others have this right of support from you, shouldn’t we have it all the more? But we did not use this right. On the contrary, we put up with anything rather than hinder the gospel of Christ.” (1 Corinthians 9:1-6, 12)

Paul, as a tent-maker, could be highly independent from those he sought to serve. In some circumstances that might be commendable but given our cultural philosophy, I find Jesus’ instruction more life-giving than Paul’s practice.

We deeply need to reconnect with the reality that we are part of one another. Either we survive and thrive together, or we don’t survive or thrive. I love how Rev. Dr. Jacqui Lewis of Middle Church express this: “If there is such a thing as salvation, we are not saved till everyone is saved.” It reminds me of a joke one of my daughters used to tell when she was younger: “Communist jokes aren’t funny unless everyone gets it.”

Stephen Patterson shares another insight I’d like to draw your attention to in the context of this week’s reading.

The empire comes when someone receives food from another. But then something is offered in return: care for the sick. The empire of God here involves an exchange: food for care.

This warrants pause. Food for care. In the ancient world, those who lived on the margins of peasant life were never far from death’s door. In the struggle to survive, food was their friend and sickness their enemy. Each day subsistence peasants earn enough to eat for a day. Each day they awaken with the question: Will I earn enough to eat today? This is quickly followed by a second: Will I get sick today? If I get sick, I won’t eat, and if I don’t eat, I’ll get sicker. With each passing day the spiral of starvation and sickness becomes deeper and deeper and finally, deadly. Crossan has argued that this little snippet of ancient tradition is critical to understanding why the followers of Jesus and their empire of God were compelling to the marginalized peasants who were drawn to it. ‘Eat what is set before you and care for the sick.’ Here is the beginning of a program of shared resources of the most basic sort: food and care. It’s an exchange. If some have food, all will eat; if any get sick, someone who eats will be there to care for them. The empire of God was a way to survive—which is to say, salvation.” (The Lost Way: How Two Forgotten Gospels Are Rewriting the Story of Christian Origins, pp. 74-75)

We should remember the social location many of the early Jesus followers lived in. For them, the gospel of interdependence was not only life-giving, but also life-saving. They had been pushed to the undersides and margins of their communities, so the gospel wasn’t about how they could escape post-mortem danger, but about how they might practically survive in this life, despite oppression, as they worked toward a world of liberation, safety, compassion and justice for all.

This makes me pause given the opposite emphasis of the culture we live in in the U.S.

What might the teachings of mutual aid or resource sharing and exchange found in the moral philosophy of Jesus in the gospels be saying to us today?

How are we still connected, still part of one another?

How else do individual freedoms and community wellbeing conflict in political debates today about the kind of society or communities we want to live in?

And how might passages like this week’s inform Jesus followers today as we apply Jesus’ social teachings in our own contexts?

There’s a lot to ponder this week. I love it when something in the Jesus story calls us to reassess the social waters we swim in. And I love how this week’s saying encourages interdependence rather than independence.

What is this week’s passage saying to you?

2.  In what ways does this week’s story call you to lean into our interdependence either in our larger secular society or in your more local faith community? Discus with your group. 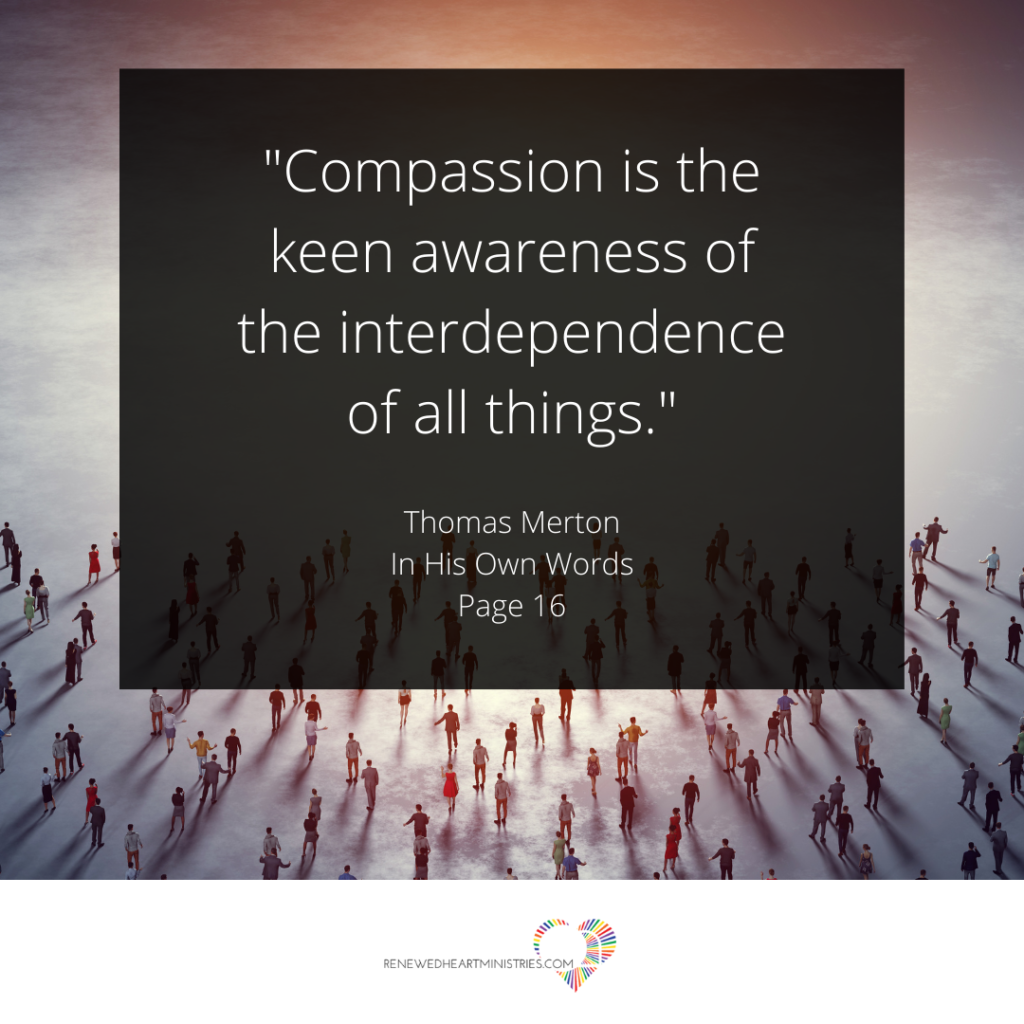