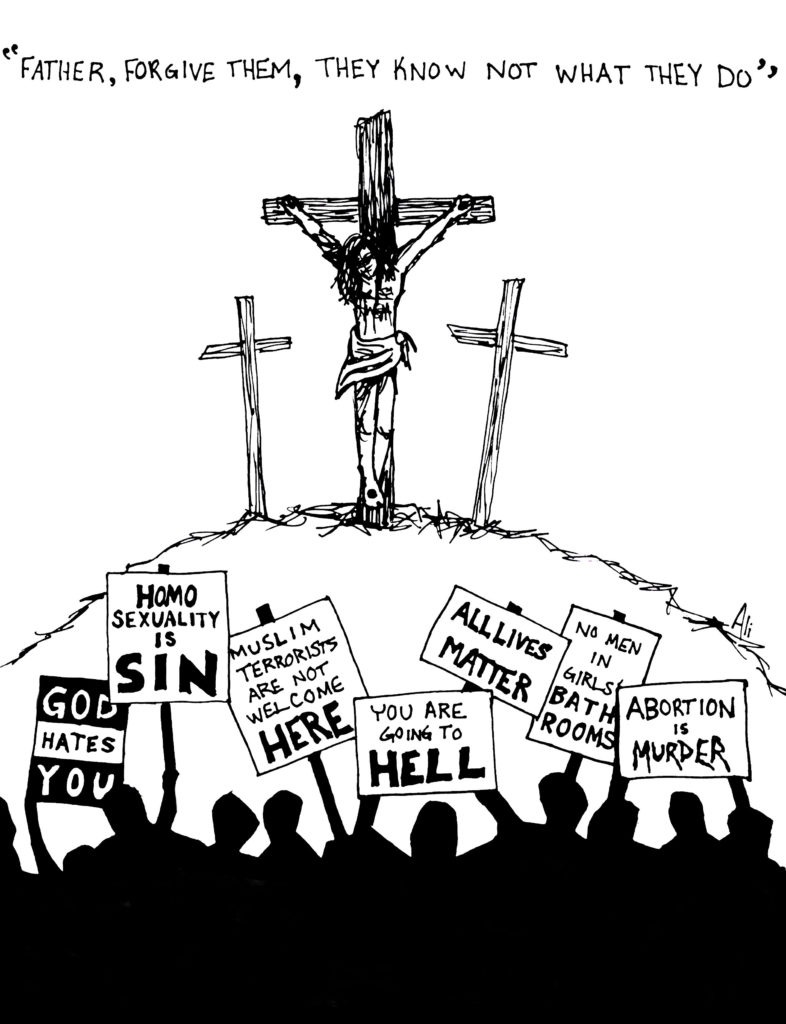 “Jesus was political. Neither he nor those whom he cared about could afford to ignore the systems of injustice and oppression damaging real human lives.”

“After John was put in prison, Jesus went into Galilee, proclaiming the good news of God. ‘The time has come,’ he said. ‘The kingdom of God has come near. Repent and believe the good news!’” (Mark 1:14-15, emphasis added.)

Two weeks ago I stated, “Politics answers the question of who gets what. So Jesus was not a religious figure as much as he was a political one. He did not fundamentally challenge his Jewish religion . . . Jesus’ teachings centered the poor and gave them the entire ‘kingdom.’ Jesus’ teachings were political.” I want to follow up on that statement a bit this week.

It’s important to define the term “politics.” “When I use the term ‘political,’” I said last week, “I don’t mean partisan. Politics means related to the polis, the members of a community. Whenever you have two or more people doing life together, you have politics. Politics answers the question of who gets what.” So when I say political this week, I don’t mean who’s running for a political office. I’m referring to the question of how, within the polis, means of survival and thriving are justly, equitably distributed—the question of who gets what.

Jesus’ teachings were deeply political. He didn’t go around getting people to say a special prayer so they can go to heaven when they die. Rather, he taught survival and liberation for those scratching out an existence in a type of living hell here, now, today. His teachings were not exclusively focused on post mortem destinations but threatened the political and economic structures of his society. He was calling for a new social order now.

We see this present politics in his predecessor, John. John, as our featured text states, was put in prison like the prophets of old, for speaking truth to power. Even today, people are not put in prison for what they believe happens after we die. They are imprisoned for threatening political and economic systems that prop up the privilege and power of the elite. Religious teachings that only focus on the afterlife have been coopted throughout history to legitimate oppressive economic and political structures of subjugation and exploitation. These are the teachings and teachers who “fool” us and leave us passive in the face of injustice, even as we believe ourselves to be religiously faithful. We do not find this type of teaching in either John’s nor Jesus’ teachings.

John was arrested for his teachings, and Jesus’ death was a political death as well. One commentator states, “Crucifixion was and remained a political and m  ilitary punishment . . . Among the Romans it was inflicted above all on the lower classes, i.e, the slaves, violent criminals, and the unruly [think political protestors] elements in rebellious provinces not least Judea . . . These were primarily people who on the whole had no rights, in other words, groups whose development had to be suppressed by all possible means to safeguard law and order in the state” (Martin Hengel, Crucifixion, p. 86).

Notice that last phrase, “to safeguard law and order.” Things haven’t changed all that much. In the United States, The Anglo-Saxon ethnic origin myth, White supremacy, Manifest Destiny, slavery, and segregation have all evolved despite the US civil rights movement into a system of mass incarceration that targets people of color in the name of ‘law and order’ (see Stand Your Ground by Kelly Brown Douglas, The New Jim Crow by Michelle Alexander, and White Rage by Carol Anderson).

In Jesus’ society and culture, crucifixion penalized political protest and/or subversive threats to the status quo. In Mark’s version of the Jesus story, Jesus takes his teachings from the margins of Galilee all the way to the center of his own political and economic structure, the door step of Caiaphas the high priest himself—The Temple State.

I understood this a new way last week when the Rev. Dr. Raphael Warnock spoke on the life of James Hal Cone at Cone’s deeply moving funeral at The Riverside Church in New York City. (If you have not had a chance to watch the service yourself, you can watch the replay online). Dr. Warnock chose Amos 7:10 for his eulogy:

“Then Amaziah the priest of Bethel sent a message to Jeroboam king of Israel: ‘Amos is raising a conspiracy against you in the very heart of Israel. The land cannot bear all his words.’”

This passage not only rightly applies to Cone, but also helps us to see Jesus in his own political tradition as well. Jesus stood in the Jewish prophetic tradition of speaking truth to power alongside of and in solidarity with the oppressed. When rescued from domesticated and house-broken interpretations, the Jesus story in the synoptic gospels (Matthew, Mark, and Luke) is deeply political. Jesus wasn’t running for some office within a political party or as a Pharisee or Sadducee seeking a spot on the Sanhedrin. He was political because he lived and taught in deep solidarity with the oppressed of his time and had compassionate concern for those exploited by the politics of his day:

“The Spirit of the Lord is on me, because he has anointed me
to proclaim good news to the poor. He has sent me
to proclaim freedom for the prisoners and recovery of sight for the blind,
to set the oppressed free,
to proclaim the year of the Lord’s favor [all debts forgiven].” (Luke 4:18-19; cf Isaiah 61.1-3)

Jesus had called for those made last in their political and economic system to be placed first in the new social order he called the kingdom or reign of God: “When evening came, the owner of the vineyard said to his foreman, ‘Call the workers and pay them their wages, beginning with the last ones hired and going on to the first.’ . . . So the last will be first, and the first will be last.” (Matthew 20:8, 16)

We see Jesus’ politics in the way he related to those labelled sinners, too. As we have discussed, the label of sinner was not used universally as it is in many sectors of Christianity today. In Jesus’ time, it was a label used to religiously define and therefore politically marginalize some individuals or groups.

Yet these “sinners” were the people who heard Jesus’ message as good news and responded positively. Jesus was excluded and labelled as a sinner himself, too, for standing in solidarity with them:

How this label of sinners was used and Jesus’ solidarity with those being labelled and marginalized will be our topic next week. For now, note that Jesus called his followers to welcome and center the very ones those in power had influenced his society to push to the edges and undersides of their society.

Jesus was a genuine threat to the social, political and economic order of his day. He was calling for his society to be turned upside down.

The same day I watched the live stream of Cone’s funeral last week, I also happened to be editing the quotations in RHM’s quotation library under the category “God of the Oppressed.”  How appropriate. As I celebrated Cone’s life and teachings and mourned his loss, I was going through quotation after quotation on one of the central themes of his life. In Cone’s book by the same name, he states:

This is why Jesus was political. Neither he nor those whom he cared about could afford to ignore the systems of injustice and oppression damaging real human lives. Today some people’s privilege allows them to ignore all things political. Politics to them is a bother. There are others, though, who do not have this luxury. For them, the political issues of the day impact their lives directly. And for still others, the policies of the day are matters of life and death. They can’t afford to wait for utopia to fall from the sky some day. For them the time is now; they are trying to survive today. For them, politics isn’t just politics. It’s not a theoretical debate. It’s about people’s lives and their very survival. For these people, and for others two millennia ago, the synoptic Jesus was also a political one.

Ultimately, politics matter because people matter. Following Jesus is not about being apolitical. It’s about endeavoring to apply the politics of Jesus in our context of survival, resistance, liberation, reparation, and transformation, today.

“After John was put in prison, Jesus went into Galilee, proclaiming the good news of God. ‘The time has come,’ he said. ‘The kingdom of God has come near. Repent and believe the good news!’” (Mark 1:14-15)

Wherever you are, keep living in love, survival, resistance, liberation, reparation, and transformation.