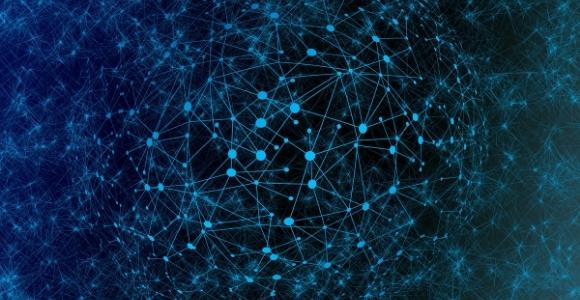 “We are part of one another. Yes, some of us see life through one lens, some of us see life through others. But we are still connected. We thrive together. We survive together. What harms some, always in some way harms everyone, even those perpetrating or benefiting from that harm. You can benefit from the harm you do to others in one area of your life while being harmed in other areas.”

This week’s reading is from the gospel of John:

Then came the Festival of Dedication at Jerusalem. It was winter, and Jesus was in the temple courts walking in Solomon’s Colonnade. The Jews who were there gathered around him, saying, “How long will you keep us in suspense? If you are the Messiah, tell us plainly.” Jesus answered, “I did tell you, but you do not believe. The works I do in my Father’s name testify about me, but you do not believe because you are not my sheep. My sheep listen to my voice; I know them, and they follow me. I give them eternal life, and they shall never perish; no one will snatch them out of my hand. My Father, who has given them to me, is greater than all; no one can snatch them out of my Father’s hand. I and the Father are one.” (John 10.22-30)

This story begins with Jesus attending the Jewish Festival of lights, which many today know as Hanukkah. This festival has a rich tradition, and its background can be read in the first and second book of Maccabees.

In 167 B.C.E – 164 B.CE., under the Seleucid empire, Antiochus IV goes to great lengths to desecrate the Jewish temple. He orders a statue of Zeus to be erected in the temple and desecrates the altar by slaughtering as an offering to Zeus a pig—an animal defined in the Torah as unclean. This act sparked the Maccabean revolt.

In the revolt, Mattathias Maccabeus and his five sons successfully push the Seleucids out of the area, and Judas Maccabees, one of Mattathias’ sons, rebuilds the altar, has new holy vessels fashioned, and rededicates the temple. This festival receives its names from the lighting of the lamps during this sanctuary dedication or cleansing: the Festival of Dedication (John), Festival of Lights, and Hanukkah.

In John’s version of the Jesus story, Jesus is often portrayed as celebrating his community’s festivals (see 2:13-25; 5:1; 7:1-13). This can remind Christians both of Jesus’ deep Jewishness, and also how often the language of John is both covertly and overtly antisemitic.

In this week’s passage, it would be more life-giving to us and to our Jewish siblings to read “the people” or possibly “the political leaders” where the text reads “the Jews.” These stories are better interpreted as a struggle among classes within Jewish society, a struggle between the powerful elite and the masses, between insiders and the marginalized. These Jewish voices were having an intracommunal conversation on what faithfulness to the Torah looked like socially, economically, and politically. Not until Gentiles who wanted to distance themselves from Jewish people began to tell these stories did people begin telling and interpreting the Jesus story as a religious contest between Judaism and Christianity.

This section of the chapter also continues the Shepherd theme in verses 1-18. This theme repeats through the gospel of John because it reflects the community’s efforts to define itself. Here, the Johannine community are Jesus’ sheep and Jesus is their shepherd. But I’m afraid they define themselves in a way that harms others. We’ll unpack this in just a moment.

In these verses, the Johaninne community is once again seeking to define Jesus here, too. The gospels repeatedly define Jesus’ relation to Abraham, Torah, Judaism, and to God (see versus 31-42).

These verses define Jesus in the context of the Jewish/Christian debate, within Judaism and between Christianity and Judaism, illustrated by Jesus’ reaction to “the Anointed one,” the Messiah.

But the way the Johaninne community defines Jesus and themselves by implication in this week’s story is not life-giving.

This is not a discussion about individuals. It’s a discussion between two communities, the Johannine community of Jesus followers and the Jewish community. The Jewish community saw massive destruction at the hands of the Roman empire in the 1st Century before this version of Jesus’ story was written. But the Johannine community implied through these verses that if they had believed Jesus was the messiah, their community would have lived forever, and because they did not believe in Jesus, they perished.

This is wrong. Whatever political and economic events happened to Jewish people in the 1st Century were simply events born out of economic and political structures (Jesus did have something to say about economics and politics). The people’s destruction or “perishing” under Rome was not an arbitrary divine punishment for Jewish rejection of Jesus as the religious, Christian Messiah.

The Johannine community defines itself as “more than” and those who do not define Jesus the way they do as “less than.” This is an intrinsically harmful exceptionalism or supremacy. It is othering that has repeatedly proven harmful to our existence as humans. It’s not life giving to define ourselves in exclusive categories of “us” and “them.” Certainly there are differences among us, yet those differences are not to divide anyone, and to the degree that we define our difference in terms of “us” and “them,” we create harm. Moving away from “us” and “them” and viewing one another with more subtlety, however, will always be life-giving.

We are connected, whether we realize it or not. Othering and dividing doesn’t breathe life; it breathes harm and death.

Many now see this truth. I think of the following statements that have been meaningful to me recently:

We belong to a mutually beneficial web of connection, well-being, and love. At the root of this connection is empathy; the result is kindness, compassion, respect, and understanding. When religion doesn’t center on this mutuality, it can become one of the toxic narratives that, in the end, dismantles self-love. (Rev. Dr. Jacqui Lewis ; Fierce Love, p. 30)

“God’s dream is that you and I and all of us will realize that we are family, that we are made for togetherness, for goodness, and for compassion.” (Archbishop Desmond Tutu; quoted by Rev. Dr. Jacqui Lewis in Fierce Love, p. 129)

Human beings are made for each other and no people can realize their full humanity except as they participate in its realization for others. (Dr. James H. Cone, God of the Oppressed.)

We are part of one another. Yes, some of us see life through one lens, some of us see life through others. But we are still connected. We thrive together. We survive together. What harms some, always in some way harms everyone, even those perpetrating or benefiting from that harm. You can benefit from the harm you do to others in one area of your life while being harmed in other areas.

Last month’s recommended reading from Renewed Heart Ministries was Rev. Dr. Jacqui Lewis’ book Fierce Love. There are so many life-giving statements in her book, and my favorite that has been continually popping up in my heart and mind is this one:

Our multifaith community (which includes agnostics and atheists) takes seriously the prayer said every Sunday: “God’s will be done on earth as it is in heaven.” For us, faith means partnering with God, whom we call by many names—including Love—to make heaven on earth. That means healing the world of brokenness; that means working hard to dismantle systems of oppression. That means accepting this: If there is such a thing as salvation, then none of us are saved until all of us are saved. Saved from poverty, saved from racism and xenophobia. Saved from gender inequality and discrimination based on whom we love.” (Lewis, Jacqui. Fierce Love, p. 185)

Christians should never have othered the Jewish people, and this week’s reading reminds us of that painful history. Repenting of this history also calls Christians to account for ways we have repeatedly practiced harmful othering with different communities also.

Today, we have the opportunity to do better. It will take some effort to undo old habits, for sure. And it’s worth it.

2. What are some of the language choices you use to keep yourselves from othering people who are different from yourself? Share with your group 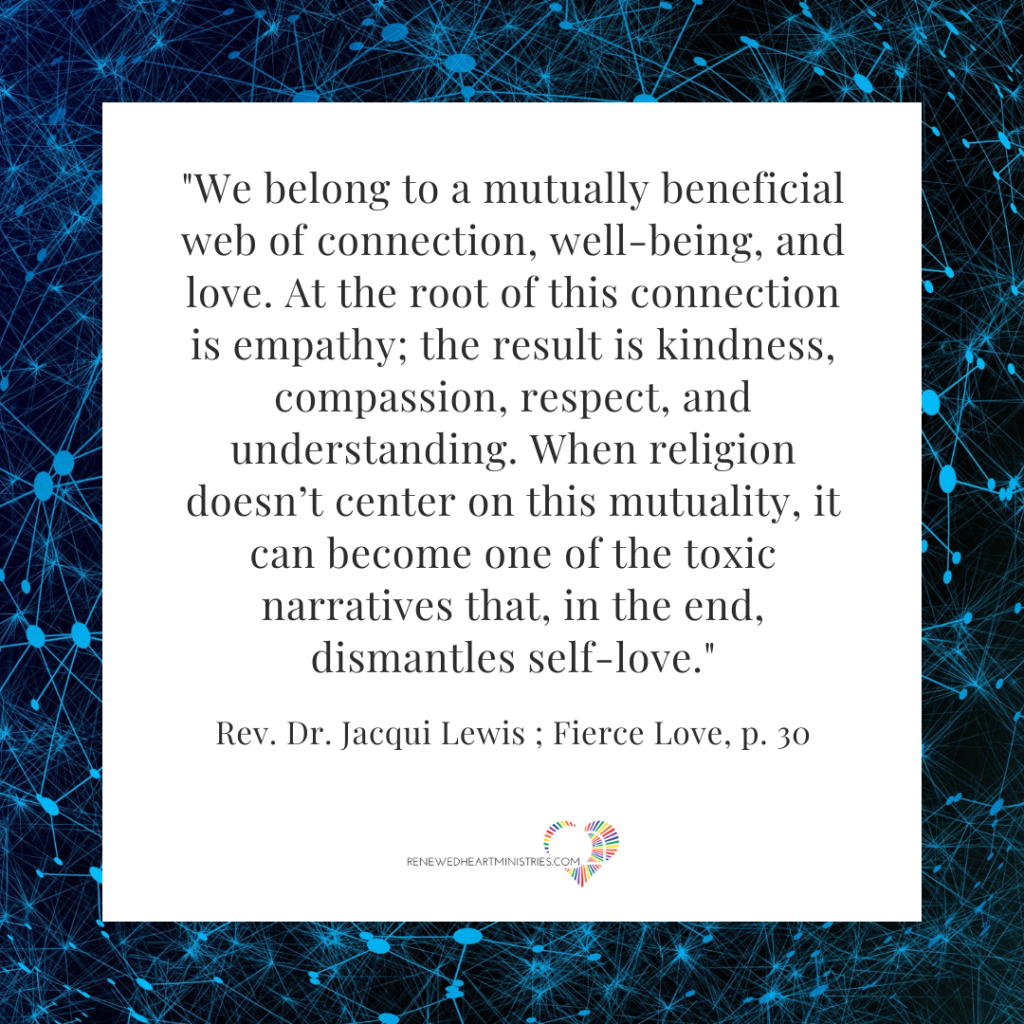