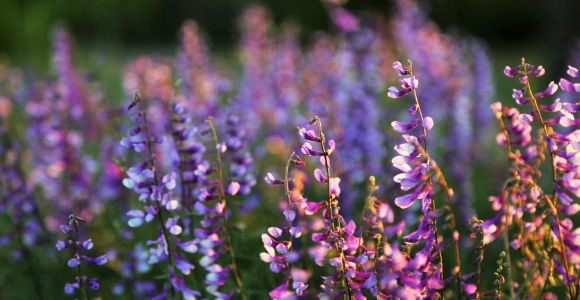 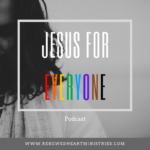 “This third weekend after Easter in our western Christian calendar, how is the Jesus of this story calling you to renew how you follow him. In our world deeply in need of love, compassion, justice, and action, what does following Jesus in your context look like? This is a good time of year to reconsider all of these questions.”

Afterward Jesus appeared again to his disciples, by the Sea of Galilee. It happened this way: Simon Peter, Thomas (also known as Didymus), Nathanael from Cana in Galilee, the sons of Zebedee, and two other disciples were together. “I’m going out to fish,” Simon Peter told them, and they said, “We’ll go with you.” So they went out and got into the boat, but that night they caught nothing.

Early in the morning, Jesus stood on the shore, but the disciples did not realize that it was Jesus. He called out to them, “Friends, haven’t you any fish?” “No,” they answered. He said, “Throw your net on the right side of the boat and you will find some.” When they did, they were unable to haul the net in because of the large number of fish.

Then the disciple whom Jesus loved said to Peter, “It is the Messiah!” As soon as Simon Peter heard him say, “It is the Messiah,” he wrapped his outer garment around him (for he had taken it off) and jumped into the water. The other disciples followed in the boat, towing the net full of fish, for they were not far from shore, about a hundred yards. When they landed, they saw a fire of burning coals there with fish on it, and some bread. Jesus said to them, “Bring some of the fish you have just caught.” So Simon Peter climbed back into the boat and dragged the net ashore.

It was full of large fish, 153, but even with so many the net was not torn. Jesus said to them, “Come and have breakfast.” None of the disciples dared ask him, “Who are you?” They knew it was the Lord. Jesus came, took the bread and gave it to them, and did the same with the fish.

This was now the third time Jesus appeared to his disciples after he was raised from the dead.

“Very truly I tell you, when you were younger you dressed yourself and went where you wanted; but when you are old you will stretch out your hands, and someone else will dress you and lead you where you do not want to go.” Jesus said this to indicate the kind of death by which Peter would glorify God. Then he said to him, “Follow me!” (John 21:1-19)

This week’s story begins with the disciples who were fishermen returning to their occupation after Jesus’ crucifixion, back to where Jesus initially found them. John 21 functions as an appendix to John’s gospel. Most scholars understand this version of the Jesus story to have ended in chapter 20, while they understand Chapter 21 to have been written by a different author. Chapter 21 also adds another post-resurrection appearance of Jesus, and carefully re-establishes Peter’s authority in the early Jesus movement since the other gospel versions paint Peter as denying Jesus during Jesus’ arrest.

The passage states that this is Jesus’ third post resurrection appearance in John. The author has counted wrong or is purposely leaving out one of Jesus’ appearances earlier in John’s gospel. As I shared a couple weeks ago, in these post-resurrection appearances in John’s gospel, three of the early Jesus communities are competing for authority: the community that recognized the leadership of Mary, the community that recognized the authority of Peter (highlighted this week), and the Johannine community in which the rest of the gospel of John was written.

Again, this chapter has more in common with the synoptic gospels than it does with the rest of John. I wrote at length about the imagery of fishing in the synoptic gospels last February in Decolonizing Fishing for People. I want to reference again how the Hebrew prophetic justice tradition interprets fishing, as a metaphor for removing unjust political rulers from power. It is not like the Christian colonialist metaphor of evangelism.

“There is perhaps no expression more traditionally misunderstood than Jesus’ invitation to these workers to become ‘fishers of men.’ This metaphor, despite the grand old tradition of missionary interpretation, does not refer to the ‘saving of souls,’ as if Jesus were conferring on these men instant evangelist status. Rather the image is carefully chosen from Jeremiah 16:16, where it is used as a symbol of Yahweh’s censure of Israel. Elsewhere the ‘hooking of fish’ is a euphemism for judgment upon the rich (Amos 4:2) and powerful (Ezekiel 29:4). Taking this mandate for his own, Jesus is inviting common folk to join him in the struggle to overturn the existing order of power and privilege.” (Ched Myers, Binding the Strong Man: A Political Reading of Mark’s Story of Jesus, p. 132)

Speaking of those who do harm within their positions of power, Jeremiah reads:

Speaking of those who “oppress the poor and crush the needy,” Amos reads:

The Sovereign LORD has sworn by his holiness: “The time will surely come when you will be taken away with hooks, the last of you with fishhooks.” (Amos 4:2)

Speaking of the abusive Pharaoh, king of Egypt, Ezekiel reads:

In the tenth year, in the tenth month on the twelfth day, the word of the LORD came to me: “Son of man, set your face against Pharaoh king of Egypt and prophesy against him and against all Egypt. Speak to him and say, ‘This is what the Sovereign LORD says:

“I am against you, Pharaoh king of Egypt,

you great monster lying among your streams.

You say, ‘The Nile belongs to me;

I made it for myself.’

“But I will put hooks in your jaws

and make the fish of your streams stick to your scales.

I will pull you out from among your streams,

with all the fish sticking to your scales.

I will leave you in the desert,

you and all the fish of your streams.

You will fall on the open field

and not be gathered or picked up.

I will give you as food

to the beasts of the earth and the birds of the sky.

In this last chapter, John imbues this imagery with fresh direction and purpose for the post-resurrection Jesus followers. (Read more in “Decolonizing fishing for people.”)

As noted, we also see the authors taking great pains to reestablish Peter’s authority as a trustworthy shepherd in the early Jesus movement through three confessions that parallel his three, previous denials (John 18:15-27). The end of this appendix, written after Peter’s death, has Jesus foreshadowing the manner of Peter’s death.

Jesus ends this scene by renewing his original call to Peter when he found him fishing in the beginning. We have now come full circle, and Jesus once again calls Peter saying, “Follow me.”

This third weekend after Easter in our western Christian calendar, how is the Jesus of this story calling you to renew how you follow him. In our world deeply in need of love, compassion, justice, and action, what does following Jesus in your context look like? This is a good time of year to reconsider all of these questions: the resurrection marks the beginning of a new year in the Christian calendar. How will your Jesus-following help you participate in shaping our world into a safe, compassionate just home for everyone this next cycle?

May each of us who endeavor to follow Jesus’ moral philosophy and teachings in the coming year do so in life-giving ways. May our presence in each of the communities we live in bless those around us. This spring, may tulips and daffodils not be the only ones waking up from winter, but may the rays of the sun also usher us toward choices that lead to more just world.

2. How will your Jesus-following help you participate in shaping our world into a safe, compassionate just home for everyone this next cycle? Discuss with your group 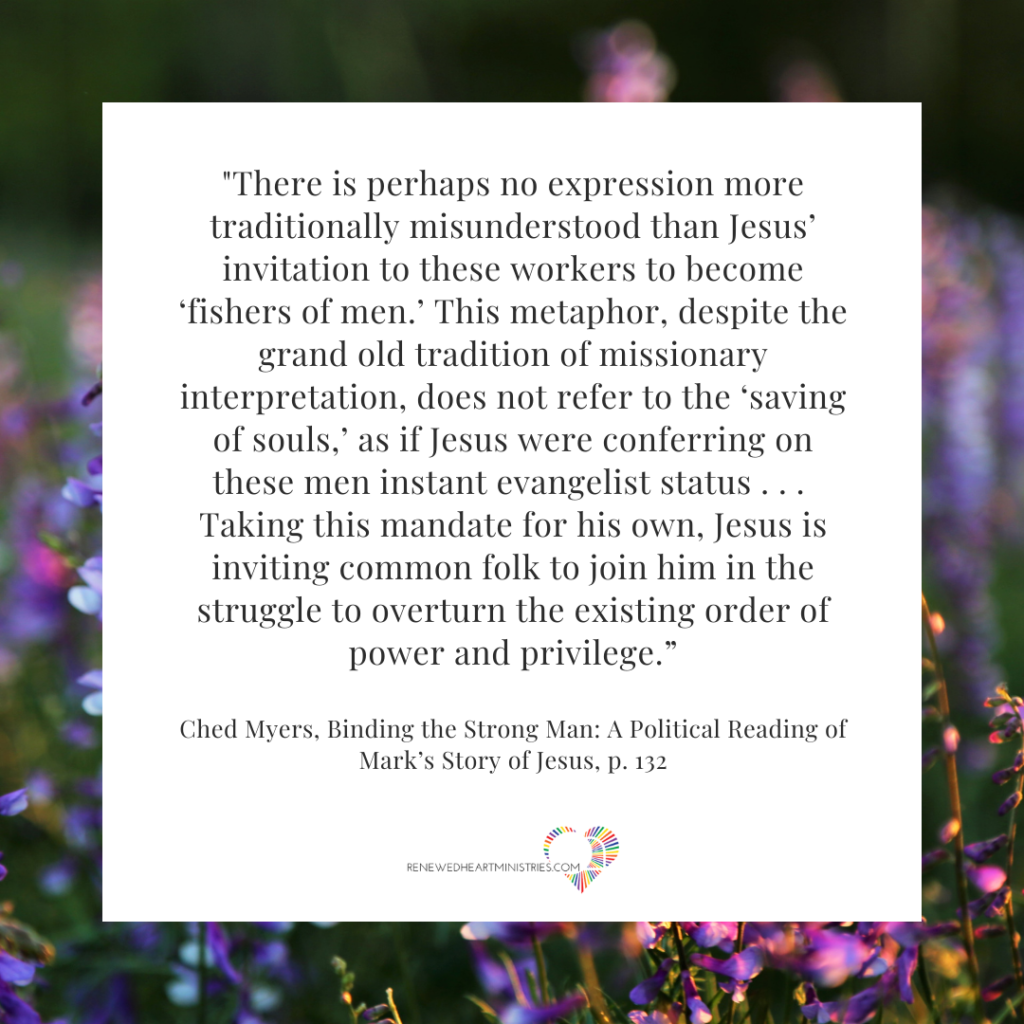