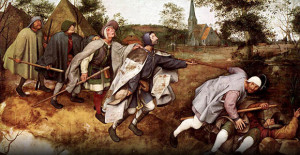 The Blind Leading the Blind by Pieter Bruegel the Elder

Luke 6:39: “He also told them this parable: ‘Can the blind lead the blind? Will they not both fall into a pit?’

Matthew 15:14: “Leave  them; they are blind guides. If the blind lead the blind, both will fall into a pit.”

The earliest record of a saying like the one we’re considering today is more than 200 years older than the time of Jesus:

Abiding in the midst of ignorance, thinking themselves wise and learned, fools go aimlessly hither and thither, like blind led by the blind. (Katha Upanishad; The Upanishads written between 800 BCE-200 BCE.) [1]

Two other early references to this metaphor appear in North India and Rome during the first century BCE. In North India, the Buddhist Pali Canon recorded an oral tradition story in 29 BCE:

In Rome, a similar phrase is found in the writings of Quintus Horatius Flaccus (Horace), a leading Roman lyric poet during the time of Augustus, who lived from 65 BCE to 8 BCE:

The Jewish community that treasured the sayings of Jesus in Sayings Gospel Q included this metaphor as one Jesus used. We’ll look at Luke’s and Matthew’s versions of this saying in just a moment.

First, Jesus wasn’t talking about physical vision.  He was talking about perception, ignorance, and an unwillingness to learn, and the danger this becomes when one is in a position of influence. I’ve experienced this personally this year. In my small town of Lewisburg and statewide here in West Virginia, I’ve witnessed ignorant leaders influencing the masses that follow them, inciting them to be afraid of those they are unwilling to genuinely “see” for who they are.

During the campaign to change this ordinance, one of the council members asked my wife and me, “Every person is somebody’s child. How would you like your child to be treated?” Regardless of what differences may exist among people, everyone should have a fair chance to qualify for work, to provide for themselves, and have a safe roof over their head at night. My family believes that, and not just for our own children.

Not long after that conversation, a local minister of the largest Baptist church in Lewisburg began to incite his congregation to fear. Choosing not to perceive members of the LGBTQ community for who they are, he began a campaign of dehumanization and mischaracterization. Out-of-town lobbyists we invited, rallies were held, signs were placed all over town. The message, like Seth Brundle’s in the 1986 horror film The Fly was, “Be afraid. Be very, very afraid.” Some of the most moral, ethically upstanding people I know belong to our local LGBTQ community, so the minister’s campaign was nothing short of slander. But the folks here in small town West Virginia don’t have the exposure or education to be able to “see” people unlike them for themselves. This was a classic example of “the blind leading the blind.”

Despite that rampant misinformation, in February of this year, our city council unanimously voted to update our city’s nondiscrimination policy. I’m also happy to say that it has been over a month now in our sleepy little town and the world has not come to an end.

After this decision though, many of the people who were working locally to incite fear and misinformation moved their effort to thestate level to try to undo the local vote. Lobbyists got legislators to introduce a new bill that was a West Virginia version of the “religious freedom” bills that have been popping up all over the U.S. Over and over again, those responsible for this bill denied their bill was connected to the discrimination ordinance but was simply designed to “restore” religious freedom they claimed had been lost (yet they could not show where or how).

This new bill passed in the state House but was voted down in the Senate. What made the difference? The Senate amended the bill to state that its provisions could not be used to undermine nondiscrimination ordinances in the name of religious liberty. Legislators then dropped the bill, proving that it had nothing to do with religious liberty, but was rather designed to give people a legal loop hole for continuing discrimination against others in the name of their  “sincerely held religious belief.”

Religion has done good. And religion has done great harm. We must encourage the good while we limit the harm. The freedom to practice what one believes is a value that must be held subject to the greater value of “do no harm to one’s neighbor.” Anyone our religious beliefs would endanger has the right to be protected from our sincerely held religious beliefs. While we possess freedom of religion, they also possess the right to live in freedom from our religion.

So what does this have to do with the blind leading the blind?

I took a day to go and visit my state capitol and speak directly with my local representatives in both the House and the Senate about our religious freedom bill. What I was overwhelmed with as I left that day, beside disillusionment of the system, was how “blind” two of my three local representatives had been to understanding what was really behind this bill. Only one of the three understood. The truth did eventually come out, but in the meantime, the depth of ignorance and lack of exposure of my local and state leaders left me speechless.

In both secular civil governance and religious faith and worship, the metaphor of the blind leading the blind is, at times, overwhelmingly appropriate.

Now, there are plenty of instances in first-century Palestine where Jesus could have applied this metaphor.

How do Matthew and Luke show Jesus using this parable?

Luke includes this as one of Jesus’s sayings in the body of teachings scholars call The Sermon on the Plain.

He also told them this parable: “Can the blind lead the blind? Will they not both fall into a pit? The student is not above the teacher, but everyone who is fully trained will be like their teacher. (Luke 6:39-40)

Matthew does something quite different, and his use of the saying begins with Mark’s underlying narrative.

In Mark 7, Jesus contrasts physical “defilement” with ritual “defilement.” The author of text mistakenly claims that “all the Jews” do not eat without first washing their hands. This is historically untrue, and the later Matthew and Luke, knowing this to be untrue, correct the error by leaving it out. (Compare Mark 7, Matthew 15, and Luke 11:37-41) In fact, among the Pharisees, only Pharisees of the school of Shammai would have washed their hands before eating, and only the priests (according to both Hillel and Shammai) were required to wash their hands before eat their food. That is, the rest of the people who were not priests were not legally required to wash their hands. But the stricter Pharisees chose to conduct themselves like the priests, believing that they also held a scholarly position in Jerusalem’s religious hierarchy. So it was not a requirement for all Jews during Jesus’s time.

By refusing to wash his hands in the presence of the Pharisees, Jesus was making a political statement. I believe he was aligning himself with the “common” people of his day as opposed to the religious “elite.” In all three gospels, Jesus turns the discussion from washing hands to the religiously-justified oppression of the poor by the wealthy, religious elite of his day. As we’ve discussed in previous weeks, the religious elite included the priests and some wealthy Pharisees.

This is where our saying from Matthew comes in this week:

Then the disciples came to him and asked, “Do you know that the Pharisees were offended when they heard this?” He replied, “Every plant that my heavenly Father has not planted will be pulled up by the roots. Leave them; they are blind guides. If the blind lead the blind, both will fall into a pit.” (Matthew 15.12-14)

The context of this saying in our most Jewish gospel is Jesus’s preferential option for the poor, the common people, and even those judged as unorthodox.

We can pair this week’s metaphor, “blindness,” to the one we discussed last week, “deafness.” The inability or unwillingness to listen to the stories of those whose experience is different than your own is what these metaphors are describing. Could it be that the cure for socio-political “blindness” is using our ears to listen to the stories of those unlike ourselves? By listening, our eyes can be opened and we can begin to “hear with our ears” “see with our eyes” and “understand with our hearts” and our blindness can be “healed.” (Compare Isaiah 6:10; Matthew 13:14-17; Mark 4:12; Luke 8:10; John 12:40.)

We must learn to stop debating about people who are being oppressed by the status quo, and begin listening to them instead. Those interested in leaning into this exercise of listening, consider beginning with listening to the experience of people of color. There are other demographics that you could start with, but this would be an excellent first step. Three books that I can recommend to get you started on your journey of listening are:

The Cross and the Lynching Tree by James H. Cone

God of the Oppressed by James H. Cone

As we use our ears, our eyes become opened. The cure for healing our eyes is in letting others have our ears and thereby access our hearts.

In the words of the Jesus of Sayings Gospel Q:

One of the purposes of HeartGroups is to facilitate a space where we can begin to learn how to listen to each other. Yet even this is not enough. Too often the groups we listen to are the ones we most identify with. In other words, we listen to people who are most like ourselves. This can create a ideological feedback loop that becomes precious little more than philosophical inbreeding. The type of listening that cures our blindness is when we listen to those who are unlike us, especially those harmed by the way things are.

This week, I invite your HeartGroups to:

Thank you for joining us this week. We’ll continue with Sayings Gospel Q next week.

Until then, keep living in love, till the only world that remains is a world where only love reigns.