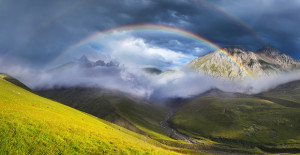 Luke 6:36: Be merciful, just as your Father is merciful.

Matthew 5:48: Be perfect, therefore, as your heavenly Father is perfect.

We can split this week’s saying into two parts. The first portion is obvious: the call to adopt God’s “pity” and apply it to the way we relate to each other. The second portion of the saying involves Jesus naming God our “Father.” Let’s begin with this second part first.

Many have described Jesus as progressive for his era in his estimation of and relation to women. Eliel Cruz’s piece 7 Reasons Why Jesus Would Have Been a Proud Feminist highlights some of the evidence for this. Yet Jesus still taught in the gender inequality of his culture.

In a presentation I gave in the summer of 2015, The Radically Inclusive Jesus, I argued that Jesus taught that women also bore the image of the Divine. In the Gospels, Jesus uses feminine images to represent God and God’s reign. (See Matthew 13:33; Luke 15:8; Luke 13:34; and Matthew 23:37.) Writers also argue that including feminine images for God as Jesus did was perfectly in harmony with the Hebrew scriptures (see “Biblical Proofs” for the Feminine Face of God in Scripture).

There is more to the affirmation of women in the Jesus story than egalitarianism however. Marcella Althaus Reid (Indecent Theology) is just one theologian who has pointed out the problems created for women because both Matthew’s and Luke’s birth narratives begin with a virgin birth. Matthew also centers male perspectives and voices in sections of his gospel, including the Sermon on the Mount. Delores Williams (Sisters in the Wilderness), Joanne Carlson Brown and Rebecca Parker (Christianity, Patriarchy and Abuse), and Rita Nakashima Brock (Journeys of the Heart) all critique traditional interpretations of Jesus’ death and how those interpretations have contributed to the abuse of women. This week’s saying presents another challenge to the treatment of women within Judaism and Christianity, and that challenge is Jesus’ gendered term for God, “Father.”

Karen Armstrong makes a helpful statement in her book The Great Transformation: The Beginning of Our Religious Traditions about the patriarchy of Axial Age cultures like Judaism:

“The Axial Age was not perfect. A major failing was its indifference to women. These spiritualities nearly all developed in an urban environment, dominated by military power and aggressive commercial activity, where women tended to lose the status they had enjoyed in a more rural economy. There are no female Axial sages, and even when women were allowed to take an active role in the new faith, they were usually sidelined. It was not that the Axial sages hated women; most of the time, they simply did not notice them. When they spoke about the “great” or “enlightened man,” they did not mean “men and women”—though most, if challenged, would probably have admitted that women were capable of this liberation too . . . It is not as though the Axial sages were out-and-out misogynists, like some of the fathers of the church, for example. They were men of their time, and so preoccupied with the aggressive behavior of their own sex that they rarely gave women a second thought. We cannot follow the Axial reformers slavishly; indeed, to do so would fundamentally violate the spirit of the Axial Age, which insisted that this kind of conformity trapped people in an inferior and immature version of themselves. What we can do is extend the Axial ideal of universal concern to everybody, including the female sex. When we try to re-create the Axial vision, we must bring the best insights of modernity to the table.” (p. xxii)

I agree with Karen here. In the New Testament we witness a push and pull in the stories of women for liberation from male-dominated oppression in the early churches. That these stories survived means that at least some women in the early church felt Jesus’ teachings set them on a trajectory of egalitarianism. One book that made a strong case for the beginnings of equality for women in the Jesus story is Discovering Biblical Equality: Complementarity Without Hierarchy by Ronald W. Pierce, Rebecca Merrill Groothuis, and Gordon D. Fee. (Unfortunately this book assumes firm gender binaries.) Elaine Pagels also acknowledges this struggle in her book The Gnostic Gospels. She writes that one of the differences between those who won and those who lost the power struggle for control in the church of the second and third centuries was their difference of opinion on whether women and men were equal.

So again, I agree with Karen’s statement above. The trajectory of the Jesus story can inspire us to bring to our reading of the gospels the “best insights of modernity.” As we’ve seen over the last few weeks, the Pharisees eventually embrace recognizing every person as bearing the image of God, regardless of whether they were Jew or Gentile. That same trajectory eventually allowed people to recognize the image of God in women as well as men, too. We see this trajectory acknowledged in the writings of the controversial New Testament Paul: “There is neither Jew nor Gentile, neither slave nor free, neither male nor female, for you are all one in Christ Jesus.” (Galatians 3:28) James V. Brownson (Bible, Gender and Sexuality) pointedly states that within the New Testament there are two streams.  One is egalitarianism and the other patriarchy.  The question we have to answer for ourselves is whether we perceive Jesus as pointing the way from the stream of egalitarianism toward patriarchy or from patriarchy toward egalitarianism.

So today, as we recognize the equality of “male” and “female,” it is just as appropriate to speak of God as a parent, to refer to God as both mother and father, or “Mother-Father” God. We could just as accurately say, “Be full of pity, just as your Mother-Father God is full of pity.” [1]

The saying for this week follows Jesus’s reference to a God who causes the sun to “rise” and the rain to fall on all indiscriminately and Jesus calls us to imitate this.

The word for “pity” in Luke, which the International Q Project most believes reflects the Q document, is oiktirmones. Oiktirmones can be translated as compassion, pity, or mercy, and each of these translations has subtle differences, so let’s discuss each of them.

Compassion is sympathy for those who are suffering and a desire to alleviate their suffering and work toward their liberation. Pity can imply a feeling of superiority; whereas mercy is compassion shown toward someone who deserves punishment or harm.

The teachings and example of Jesus do affirm compassion toward the suffering and oppressed. Yet the sayings of Jesus we’ve explored over the last few weeks also teach us how to relate to our enemies, those who persecute and oppress other people.

When we apply pity or compassion to our persecutors, enemies, or oppressors, the differences become clearer. Pity contains the temptation to believe that we are superior and disconnected from oppressors. But our goal is interconnectedness, not superiority. All humanity is connected, and Jesus sets the radical transformation of oppressors as the goal we should strive for.

As Howard Thurman relates in Jesus and the Disinherited, the slave participating in slave masters’ Christian worship services could easily reason, “I’m having hell now. When I die, I shall have my heaven. The master’s having his heaven now. When he dies, he will have his hell.” And the following day, speaking of the master, that slave could say “Everybody talkin’ ‘bout heaven, ain’t going there!” (p. 60)

But the deep human desire is not to merely survive this life’s oppression, but to thrive through liberation. Compassion will get us closer to liberation than superiority ever will. Perhaps, oppressors should be pitied for being captive to a system of injustice that is broader than them, but compassion in the form of mercy can lift us above mere pity to work toward the transformation of our oppressors.

Let’s also note that Matthew uses the term teleios, usually translated as “perfect.” Teleios is the Greek word from which we get our modern word telos. A telos is an ultimate goal or aim. In Matthew’s gospel, Jesus explains that he had come not to abolish the Torah but to bring it to completeness (pleroo). He is in agreement with Hillel in seeing the Torah as the beginning of a trajectory that is not complete until it ends in compassion. Whether someone is our peer and able to reciprocate, lower on the social pyramid and without the ability to reciprocate, or an enemy, higher on that pyramid, we follow Jesus by treating them with the compassion and mercy we would want to receive. For Jesus, the reign of God is people taking care of people. And that was the aim that the Torah always pointed to.

In this, we come back to our original points this week. The Jesus story is part of that Jewish trajectory that ends with egalitarianism not only between men and women, but among everyone. At the end of that trajectory, no one dominates or subjugates another. We have a world where we learn to serve one another rather than create more efficient means of depriving others. In that world, we choose the way of compassion for everyone, a compassion as indiscriminate as the shining sun and falling rain. In acknowledging that our world is a shared table, we wake up, nonviolently confront evil, and transform our world into a safer, more compassionate home for us all.

The way of compassion is rooted in being “full of pity, just as your Mother/Father is full of pity.” (Q 6:36)

1. This week, write out what compassion looks like, in your view, for the three groups we mentioned above.

a. Those presently suffering from whom you will not receive anything in return.

b. Those you consider your peers who have the ability to reciprocate when you give.

c. Those with whom you believe you have a negative relationship.

2. Discuss with your HeartGroup what each expression of compassion looks like and which of these three you feel would most transform your world.

3. Choose one of these three compassionate actions to practice this week.

Thank you for joining us this week.

1. I did not get to choose the title of my first book, Finding the Father. The publishers chose that title.