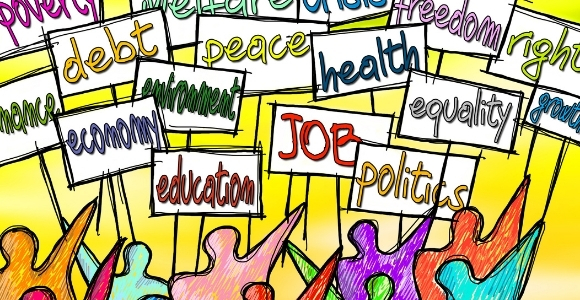 “On reaching Jerusalem, Jesus entered the temple courts and began driving out those who were buying and selling there. He overturned the tables of the money changers and the benches of those selling doves, and would not allow anyone to carry merchandise through the temple courts. And as he taught them, he said, “Is it not written: ‘My house will be called a house of prayer for all nations’? But you have made it ‘a den of robbers.’” The chief priests and the teachers of the law heard this and began looking for a way to kill him, for they feared him, because the whole crowd was amazed at his teaching. (Mark 11:15-18)

Most scholars believe that out of the four canonical gospels we have today, Mark was written the earliest and John the latest. In the passage for this week, Mark’s author conflates and places in the mouth of Jesus two passages from the Hebrew scriptures, one from Isaiah and the other from Jeremiah:

“These I will bring to my holy mountain
and give them joy in my house of prayer.
Their burnt offerings and sacrifices
will be accepted on my altar;
for my house will be called
a house of prayer for all nations.” (Isaiah 56:7)

“Has this house, which bears my Name, become a den of robbers to you? But I have been watching! declares the LORD.” (Jeremiah 7:11)

In Mark’s gospel, the Temple in Jerusalem was the capital building of the Temple state. The Temple state, centered in Jerusalem, was not a purely religious system as we think of Christian churches today: there was no separation of church and state in Jesus’ culture. The Temple state was a religious, political, social, and economic system that governed all aspects of Jewish society. It’s telling that in the revolt leading up to the Jewish-Roman war of 66-69 C.E., when the rebels took over the temple, the scene was not like a church or a synagogue, but rather a banking institution. The rebels found the debt records for the poor and burned them. In one sense, it was a religious act for those who considered faithfulness to the Jubilee [debt cancellation] of the Torah to be faithfulness to the God of the Torah. But it was also an economic and political act too.

By the time John’s gospel was written, the story of Jesus and the Temple has evolved. It has become concerned not with a system that exploits the poor but with one that defiles religious space. The writer’s emphasis is not on the Temple as a building at the center of a system that perpetuates poverty, but on the Temple as a symbol for Jesus’ body which would be crucified and then resurrected (John 2:14, 19-20).

I understand why so many people have focused on John’s version of the story recently. Many Christians have begun their stride toward the Easter holiday and its focus on the death and resurrection of the Christ. I find Mark’s political and economic emphasis on the systemic exploitation of the poor much more helpful at this time in the U.S., however.

It’s important to connect the context of Jesus’ temple protest in Mark with his other acts and statements that day:

“As he taught, Jesus said, ‘Watch out for the teachers of the law. They like to walk around in flowing robes and be greeted with respect in the marketplaces, and have the most important seats in the synagogues and the places of honor at banquets. They devour widows’ houses and for a show make lengthy prayers. These men will be punished most severely.” (Mark 12:38-40)

Jesus’ concern here is the economic exploitation of the most vulnerable: how widows are being forced into poverty. He is not concerned that something is being done incorrectly in the temple’s worship system.

“Jesus sat down opposite the place where the offerings were put and watched the crowd putting their money into the temple treasury. Many rich people threw in large amounts. But a poor widow came and put in two very small copper coins, worth only a few cents. Calling his disciples to him, Jesus said, “Truly I tell you, this poor widow has put more into the treasury than all the others. They all gave out of their wealth; but she, out of her poverty, put in everything—all she had to live on.”

This statement is not praise for the widow as so many Christians interpret it today. No, Jesus is critiquing a system that leaves widows with nothing left to live on!

This story ends with:

“As Jesus was leaving the temple, one of his disciples said to him, ‘Look, Teacher! What massive stones! What magnificent buildings!’ ‘Do you see all these great buildings?’ replied Jesus. ‘Not one stone here will be left on another; every one will be thrown down.’ (Mark 12:41-13.2)

In Mark, Jesus is not speaking about his own death and resurrection as he is in John. He is speaking about how exploitative systems are not sustainable and will eventually crumble under the weight of their own injustice.
The present economic system of consumption and massive profit at others’ expense is unsustainable ecologically. Jeff Bezos has once again become the richest person in the world, with a net worth of $191.2 billion in the midst of a pandemic with an economic displacement worse than during the Great Depression. I think, too, of President Biden’s reluctance to cancel student debt even though it was one of his campaign pledges. But what stands out to me most is how immigration in the U.S. has been handled over the last four years and I hope that the next four will bring desperately needed change.

The U.S. immigration system has a long racist history. Rather than America becoming a multiracial democracy, its immigration system is designed to keep it as a country where White people are still the majority and where those White lives matter more than the lives of those who are not White. (For a detailed, yet easy to understand recounting of the racial history of immigration in the U.S. see Kelly Brown Douglass’ Stand Your Ground: Black Bodies and the Justice of God.)

Over the past four years, for example, we have seen the immoral crime of the U.S. terrorizing families by ripping children away from their parents just because they sought asylum here. Words from Emma Lazarus’s famous 1883 sonnet “The New Colossus”—“Give me your tired, your poor, Your huddled masses yearning to breathe free”—have been eclipsed by White nationalism and White supremacy. If ever there were a setting in which Jesus followers should follow Jesus in flipping the tables of a system that was irreparably harming those who were already vulnerable, family separation was it. Some Christians actually did respond. But not many.

I’m thankful to see the Biden administration moving toward change on this issue. I’m thankful to see it using more inclusive language, such as “noncitizens” and “undocumented noncitizen” instead of “alien” or “illegal alien,” referring to the “integration” of immigrants into society instead of their “assimilation,” and abandoning language that dehumanized immigrants or was racist.

This is undoubtedly a step toward a welcoming America. And while I’m thankful for these beginnings, I want to see more than linguistic changes, too. It’s going to take real policy change, real action to turn around the Trump administration’s hostile stance and inhuman response to immigrants. We have a chance to do something fundamentally different. My hope is that we transition away from the immigration policies of the past that endeavored to protect Whiteness, and instead take genuine steps to affirm the future of America as a multiracial democracy where every voice matters and everyone, regardless of race, religion, net worth, ability, gender, orientation, or gender expression can have a seat at the table. I know these changes don’t ever happen fast enough, and we have the potential at this moment to leap forward.

My favorite part of Mark’s story this week is actually found in Mark 11:

“Jesus entered Jerusalem and went into the temple courts. He looked around at everything, but since it was already late, he went out to Bethany with the Twelve.” (Mark 11:11)

Jesus’ temple protest was supposed happen the first day Jesus entered Jerusalem, but by the time he arrived at the temple courtyard, it was too late in the day and there were not enough people in the temple courtyard for his protest to make much of a difference. So Mark states he goes back to Bethany with his disciples, spends the night, and comes back the following day.

Again, change for those being harmed never happens fast enough. But in each of our circles of influence we have today and all the potential for change today brings. Each day we still can move a more just, safe, compassionate, inclusive future closer.

2. Share three characteristics you feel a protest must possess in order to be effective in our social climate, today.