A preferential option for two vulnerable communities in the gun control debate. 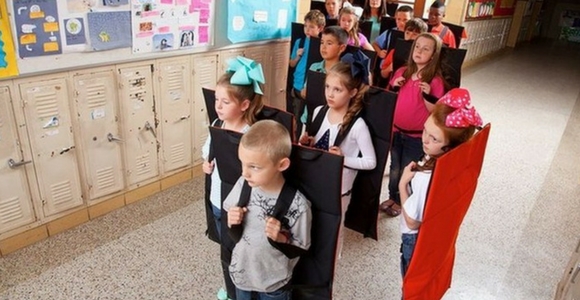 “Put your sword back in its place,” Jesus said to him, “for all who draw the sword will die by the sword.” Matthew 26:52

Last week, as Crystal and I drove our kids and the kids we carpool with to school, these children had a conversation on the best escape routes at their schools in case a gunman showed up at their school and began firing.

Stop and let that sink in.

Instead of chatting about an upcoming test, a high school sports game, or an after-school event, they were talking about what they could do to stay alive if a shooter showed up at their school.

This is not the world I want my kids to be growing up in.

And I believe another world is possible.

In Splendid Literarium: A Treasury of Stories, Aphorisms, Poems, and Essays, the author Aberjhani eloquently states: “Democracy is not simply a license to indulge individual whims and proclivities. It is also holding oneself accountable to some reasonable degree for the conditions of peace and chaos that impact the lives of those who inhabit one’s beloved extended community.”

The two words that jump out at me from Aberjhani’s statement are “accountable” and “reasonable.” Community involves balancing individual rights and the well being of community. The tension between these two can be challenging. Our context this week, though, is protecting the lives of our children.

I want to echo what Deshanne Stokes tweeted last June after a mass shooting in Virginia: “Violence isn’t a Democrat or Republican problem. It’s an American problem, requiring an American solution.” Violence is not a Left versus Right debate. Both sides of the aisle should be motivated to ensure no more children die.

My country, the U.S., is obsessed with guns. Many people in my own neighborhood value their individual rights to own guns over the lives of our community’s children. This is not hyberbole.

The loudest voices right now in my neighborhood promoting individual gun rights are Christians. I Two years ago I stood across the aisle from many of these people as our town debated an inclusive nondiscrimination ordinance. Then, they wore t-shirts and held signs about bathrooms and keeping children safe. So it resonated with me last week when Dana Simpson tweeted: “Hearing Republicans say that, look, massacres of kids are very sad but we just can’t limit people’s basic freedoms is weird if you’re a trans person who’s been listening to a years-long debate about whether you need to be banned from public bathrooms TO KEEP CHILDREN SAFE.”

It seems that keeping children safe is only a concern for some Christians when that serves their personal biases or prejudices. Studies debunk the bathroom myth yet mass shootings are becoming commonplace. Mass shootings now so common in schools that some entrepreneurs are seeing an opportunity to capitalize on them. According to Business Insider, you can now purchase a school nap time pad/blanket for your small child that doubles as a bullet proof shield.

Do we really value the lives of the children in our community that little? Gun regulations can operate just like speed limits, car inspections, and driver licensing. We title and tag cars at each sale and mandate universal driver education and training. My younger daughter is studying for her driving test presently. She must complete a written test and also sit behind a wheel and demonstrate her ability to drive a car safely. My other daughter has to wear her glasses when she drives. All of us must carry liability insurance, and here in West Virginia, we must have our cars inspected every year too. All of these rules exist and anyone who complies with them can still have and drive their car. Yet the rules drive home the point that when you drive a car, you share the road with everyone else, with others who would like to stay alive themselves and keep their children alive.

In Another Day in the Death of America: A Chronicle of Ten Short Lives, Gary Younge states,

“So long as you have a society with a lot of guns—and America has more guns per capita than any other county in the world—children will be at risk of being shot. The questions are how much risk, and what, if anything, is being done to minimize it? If one thinks of various ways in which commonplace items, from car seats to medicine bottle tops, have been childproofed, it’s clear that society’s general desire has been to eliminate as many potential dangers from children as possible, even when the number of those who might be harmed is relatively small. If one child’s death is preventable, then the proper question isn’t “Why should we do this” but rather “Why shouldn’t we?” It would be strange for that principle to apply to everything but guns.”

Adam Winkler argues that even the Wild West had more gun regulations than many of our states do today. “When you entered a frontier town, you were legally required to leave your guns at the stables on the outskirts of town or drop them off with the sheriff, who would give you a token in exchange. You checked your guns then like you’d check your overcoat today at a Boston restaurant in winter. Visitors were welcome, but their guns were not.” (Did the Wild West Have More Gun Control Than We Do Today? See also Ross Collins’ Gun Control and the Old West)

Racial Disparity and the Militarization of the Police

This is not just a current news topic. It’s also an area where we can apply the teachings of Jesus. A key part of living out the shared table philosophy with a preferential option for the vulnerable that Jesus’ modeled is learning to listen to other vulnerable voices around the table. Children are not the only vulnerable people involved in the gun control debate. White, straight, cisgender paranoid males raised in an environment of toxic masculinity and claiming that they’re being oppressed and their right to own assault weapons are being infringed are not vulnerable in this world.

But gun regulations have too often been used to disproportionately target communities of color. Sameer Rao cautions, “Gun control in America won’t work for all Americans unless advocates push to demilitarize police departments and advance measures that don’t disproportionately impact people of color. Gun control reform that does not go this route will end in laws that further empower police to seize weapons and use them against whomever they choose. History shows who they’ll target first.” (Gun Control Advocates Cannot Win Without Fighting Their Own Racism.)

If this history is unfamiliar to you, Creed Newton’s article on how calls for strict gun control after mass shootings overlook how regulations have been used to disarm people of color is a fantastic read and a great place to start. In this article, Newton quotes Saul Cornell of Fordham University: “Saying gun laws are always racist is just false. Saying that gun laws have never been racist is also just wrong.”

Can we protect our children from mass shootings and also not disproportionately target people of color? Can we, like other countries, demilitarize our police so that citizens and non-citizens don’t face unilateral gun regulations that would leave them even more vulnerable?

I believe “another world” here in the U.S. is possible. Like other countries, we can keep our children safe. Regulations can be carried out democratically and with care so as to not target some vulnerable communities while we seek to protect others. I believe we can choose a path that leads to a safer, more compassionate, just society without sacrificing those who are vulnerable.

And this leads me to my final thoughts on our passage this week.

These words are about weapons.  I believe we can apply them to our modern  weapons today.

In the gospel of Matthew, one of Jesus’ disciples pulls out a sword and strikes another person in an endeavor to protect Jesus. Jesus then turns and responds,

To be clear, the Bible is not a nonviolent book. Nor does it consistently teach nonviolence. But Jesus’ teachings in the gospels are consistently nonviolent. Even in Luke’s gospel, where Jesus tells his disciples to “go buy swords” the context reveals that these swords were not to be used.

The constitution is not a moral counter-argument. The U.S. constitution gave White people the right to own other people until 1865. That leeway wasn’t right even though it was written.

Some also argue, “But it’s a heart matter. People need to learn how to deal with their anger without resorting to guns. You can’t change people’s hearts with laws.” I hear this argument whenever laws are proposed to protect vulnerable, minority groups from the majority.  Rules do train and change people. Rules train my children. Rules also shape people’s hearts and teach them to listen to others whose experience is unlike their own. Both Dr. Martin Luther King and Kwame Ture (Stokely Carmichael) address this argument, convincingly for me.

“Now the other myth that gets around is the idea that legislation cannot really solve the problem and that it has no great role to play in this period of social change because you’ve got to change the heart and you can’t change the heart through legislation. You can’t legislate morals. The job must be done through education and religion.

Certainly, if the problem is to be solved then in the final sense, hearts must be changed. Religion and education must play a great role in changing the heart.

But we must go on to say that while it may be true that morality cannot be legislated, behavior can be regulated.

It may be true that the law cannot change the heart but it can restrain the heartless.

It may be true that the law cannot make a man love me but it can keep him from lynching me and I think that is pretty important, also.

I believe there is a way to reach hearts while simultaneously limiting people’s power to hurt others. It doesn’t have to be one or the other. Gun regulations are a matter of power, and we must engage the work of balancing that power for all lives involved. I believe this can be done democratically if we as a society choose to do it. Representatives who are bought and owned by the gun industry probably won’t do it for us.

It’s time to lay down and let go of the guns.

2. Find two to three nonviolent conflict resolution practices that resonate with you.

3. Bring these two or three practices to your HeartGroup this coming week and discuss how you might begin implementing them as a group. Conflict is inevitable, but violence is optional. Nonviolence can begin with community practice.

4. Call your representatives. Share how you feel about the mass shootings and measures you hope lawmakers will take.

Another world is possible!