The Liberation dove and the difference between nonviolence and peace. 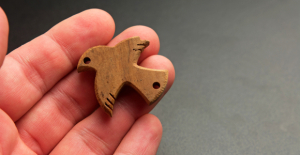 In those days Jesus came from Nazareth of Galilee and was baptized by John in the Jordan. And just as he was coming up out of the water, he saw the heavens torn apart and the spirit descending like a dove on him. And a voice came from heaven, “You are my Son, the Beloved; with you I am well pleased.” (Mark 1:9–11)

This week I’d like to invite you to step back into a world that revolved around Jerusalem within the first century, and to draw your attention to a few significant details in Mark’s retelling of Jesus’ baptism.

Especially focus on the spirit’s descent in the form of a dove; Jesus’s declaration of Sonship; and “the Voice’s” declaration of love for Jesus, with whom he is “well pleased.”

As I watched in the night visions, I saw one like a Son of Man coming with the clouds of heaven. And he came to the Ancient One and was presented before him. To him was given dominion and glory and kingship, that all peoples, nations, and languages should serve him. His dominion is an everlasting dominion that shall not pass away, and his kingship is one that shall never be destroyed.

Jesus took this text, held dear by an oppressed people who themselves dreamed one day of world domination,[1] and announced that he was this Son of Man finally come. However, the world he was bringing was going to look a little different to what the Jews had expected (more on this in a moment).

This is the cultural significance to a first century bestowal of the title “Son of God” within a Jewish context. The one declared to be “Son of God” would be the new king of Israel just like David of old. This was the “Son of Man” who would be declared the king (“Son of God”) of an everlasting kingdom. (Jesus, though, would even turn the notion of human hierarchies, including “kings” and “kingdoms,” on their heads.[2])

Notice the use of “Son of God” for the world-dominating King of Israel:

Why do the nations conspire, and the peoples plot in vain? The kings of the earth set themselves, and the rulers take counsel together, against the LORD and his anointed [David], saying, “Let us burst their bonds asunder, and cast their cords from us.” He who sits in the heavens laughs; the LORD has them in derision. Then he will speak to them in his wrath, and terrify them in his fury, saying, I have set my king on Zion, my holy hill. I will tell of the decree of the LORD: He said to me [David], “You are my son; today I have begotten you.” (Psalms 2:1–7, emphasis added)

The title of “God’s Son” was a deeply politically charged title within the culture of oppression for first century Jews.

Mark knows the political significance of what he is retelling. He pushes the point home even further by mentioning the phrase “with you I am well pleased.” This, too, was a politically charged phrase within an apocryphal context. Notice the book of Daniel’s point, which the foreign kings, through uncomfortable means, came to know:

And they shall drive thee from men, and thy dwelling shall be with the wild beasts of the field, and they shall feed thee with grass as an ox: and seven times shall pass over thee, until thou know that the Most High is Lord of the kingdom of men, and he will give it to whomsoever he shall please. (Daniel 4:29, LXX, emphasis added)

And he was driven forth from men; and his heart was given him after the nature of wild beasts, and his dwelling was with the wild ox, and his body was bathed with the dew of heaven; until he knew that the most high God is Lord of the kingdom of men, and will give it to whomsoever he shall please. (Daniel 5:21, LXX, emphasis added)

Mark is ensuring that his audience does not miss the point when he calls Jesus the son of God. This is the return of the long-awaited king of Israel, the son of God, the one in whom God is pleased to give the kingdom.

Now comes the first twist in Mark. The spirit of the Lord descends on Jesus just as it did on the Judges of old who, according to the ancient stories, repeatedly delivered the Hebrew people from foreign oppressors.[3] But rather than a violent portrayal, such as in the book of Judges, this delivering spirit of the Lord descends on this new “judge/deliverer” in the form of a nonviolent dove.

The Jesus narrative announces the arrival of a new world where humans are no longer going to practice dominance over other humans (much to the dismay of those who longed for the day when Jerusalem would rule the world[4]), a world that will be birthed through the nonviolence of a dove.

And what hope does this deliverance, this liberation that comes in the form of a dove, bring?

A new order. A new world. A new humanity where the presently marginalized, excluded, and oppressed are blessed while the insiders, the privileged, the powerful, and the advantaged are invited into an existence that is, at bare minimum, problematic for their current status quo (see Luke 6:20–26). This is a world where radical transformation is offered to oppressors, while radical liberation is offered to the oppressed. (Although it looks different to both, it genuinely is liberation for both those who are on top as well as those who are at the bottom.) This is a new world where privilege is not simply offered to those to whom it was previously denied, this is the arrival of a world no longer founded on the very principles of privilege and subordination. This is a humanity where, regardless of race, gender (male or female; cis or trans), wealth, education, or orientation, we see and embrace one another as part of ourselves. Each a beautiful reflection of the divine in a human kaleidoscope of wonder. No more us and them. We begin to discern how we are all siblings, all children of the same Creator, destined to sit around that same family table once again.

Mark’s Gospel does not begin with a Jesus who settles metaphysical, ontological, and cosmological debates. This is a Jesus who appears by a river along side of an announcement of the arrival of a new world where everyone is welcome, where everyone will be treated with equity and justice, which will bring beautiful liberation descending in the form of a dove.

Till the only world that remains is a world where love reigns. Keep living in love, loving like Jesus.